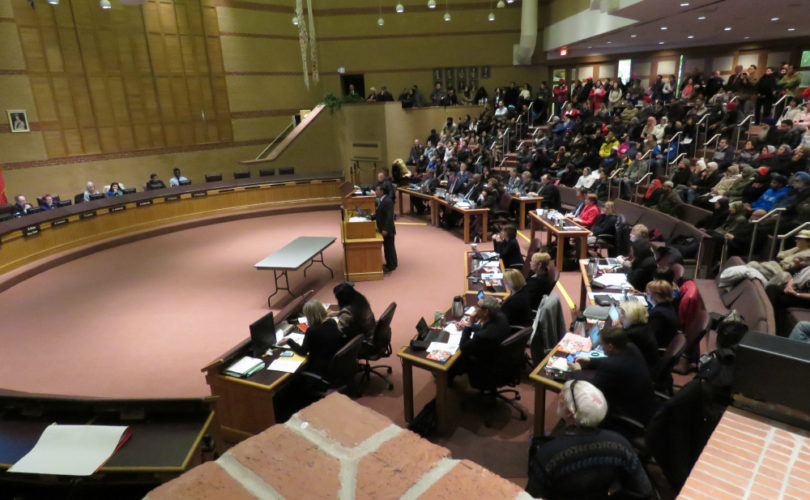 MISSISSAUGA, Ontario, March 26, 2015 (LifeSiteNews.com) — More than 300 concerned parents crammed into a vaulted chamber at a Peel District School Board meeting Tuesday night to protest the Liberal government’s controversial sex-ed curriculum, set to be rolled out this September in Ontario’s publicly funded schools.

Jotvinder Sodhi, president of the Home Owners Welfare Association (HOWA), gave an impassioned plea for parents’ rights that was frequently interrupted by cheers, prompting chair Janet McDougald to point out that according to the bylaws, Sodhi had only 10 minutes.

“Do you believe it, the board has only ten minutes for the parents!” Sodhi replied, turning to face the crowd, which had erupted with boos. “Please, please give us time!”

Sodhi emphasized repeatedly that parents had not been consulted, and that the majority objected strongly to the sex-ed curriculum. “We suggest that parents who want to continue with controversial sex ed must opt in,” he said, to cheering and clapping. “It’s very simple mathematics. If 90 percent plus are against it, why not those five to seven percent have separate schools, separate classes?”

“We want the board to elaborate every single point to every single parent so they can make an informed decision,” Sodhi said, adding that the parents he represents “are not fundamentalists, we are not homophobians, we are just parents,” who are so concerned that “on a weeknight we are here, hungry, thirsty, only for our children’s rights. Do not undermine our parental rights.”

If the sex-ed curriculum is implemented, parents will pull their kids from school en masse, Sodhi warned. “Please do not push us in the corner that we end up choosing to send none of our children to the schools,” he said. “Schools will be empty, and board will not have a job.”

McDougald said the board will respond to HOWA’s concerns at its April 8 meeting.

After Sodhi’s presentation, the crowd burst into resounding shouts of “We say no! We say no!” Most then left, but a few persevered for the public question period.

McDougald stated in answer to a question that the Peel board supported the curriculum update, but the trustees had sent a letter to the Ministry of Education “suggesting the consultation should have been broader.” They received no answer. “Do you think you will get one?” asked the parent. “No, I don’t,” McDougald said.

“The school board’s responsibility is to teach the curriculum, so that is what we will do, and frankly this board believes that children need this information in this day and age,” she said.

Children will get information off the Internet, “so better to have accurate information, factual information that is delivered by a trusted teacher in a classroom than to let them out on their own acquiring all sorts of misinformation.”

McDougald said no to a request that parents attend the training sessions for staff on the sex-ed curriculum. “We would not invite parents to be part of professional learning with our staff,” she said. “We want to develop those relationships” with parents, “but our first and foremost responsibility is teaching children.”

The protest started earlier at the corner of Hurontario Street and Matheson Boulevard, where MPP Monte McNaughton, several parents, and Jotvinder Sodhi made remarks before the crowd marching along the sidewalk into the boardroom at the board’s 5650 Hurontario Street headquarters.

The March 24 rally was one of a number of protests against the sex-ed curriculum.

Others include a silent demonstration at a media reception of Premier Kathleen Wynne, tonight (March 26) at 5:00 p.m. at the Verdi Convention Center, 3550 Derry Rd. E in Mississauga. There is also an information session on the sex-ed curriculum in Whitby Emmanuel Reformed Church, 401 Rossland Road West, beginning at 6:30 tonight.