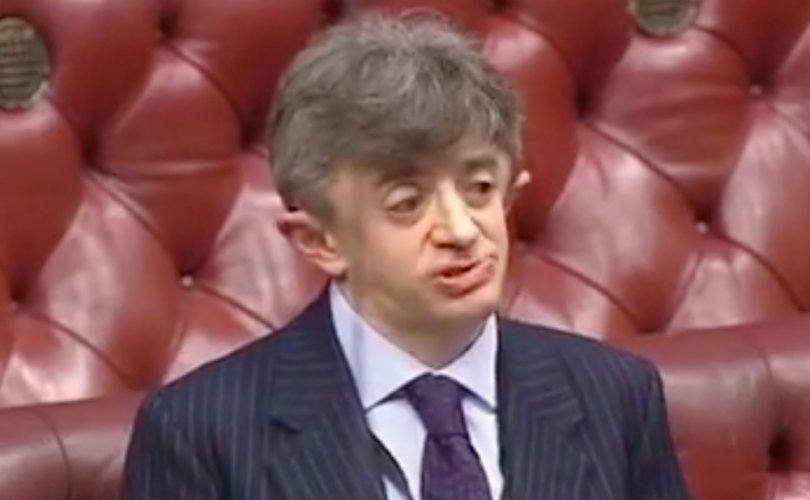 LONDON, England, July 17, 2019 (LifeSiteNews) – In one of the most privileged chambers in the world, a disabled peer spoke up for the right to life of the most vulnerable.

On Monday Kevin Shinkwin, 48, who was awarded a life peerage in 2015 and took the title Baron Shinkwin, stood up in the House of Lords and argued that a liberal abortion law should not be forced on Northern Ireland.

Shinkwin said that he supports an amendment introduced by Baroness O’Loan, a Northern Irish life peer who says the proposed law is “not workable” and should not be imposed on her country without its consideration by its Assembly. This is not only because the amendment shows respect for Northern Ireland’s devolution (partial home-rule) and people, but because the current abortion law protects disabled people.

Shinkwin, who has “brittle bone disease,” wondered aloud if anyone in government had considered the message changing Northern Ireland’s abortion law would send to the parents and families of disabled children and also disabled citizens of Northern Ireland.

“Today, Northern Ireland is the safest place in the United Kingdom to be diagnosed with a disability,” he stated. “If the Bill is passed, that will change overnight on 21 October.”

Shinkwin invited the House of Lords to consider the proposed law, which permits abortion on the grounds of an unborn baby’s disability, from the perspective of someone with Down syndrome.

“In England and Wales, the latest available figures show that 90 percent of human beings diagnosed with Down’s syndrome are aborted,” he said.

Shinkwin argued that Northern Ireland’s commitment to disability equality was to its “immense credit” and that insisting on a law permitting the abortion of disabled children flies in the face of the UK’s 24-year-old Disability Discrimination Act.

“How does [the Minister] reconcile the Act’s acknowledgement of the right of disabled human beings to be equal, to contribute to society, and to be respected with the message of the Bill, which is that if you are born with a disability, as I was, you are better off dead? For that is its message to disabled human beings, their families, and the people of Northern Ireland,” he stated.

Shinkwin trenchantly suggested that those who support the abortion of people with Down Syndrome have the greater learning disability.

“I wonder who has the greater learning disability here: those who seem intent on denying the equal right to exist to those such as human beings with Down’s syndrome or those, especially in my [Conservative] party, who appear determined to unlearn the lessons of the Disability Discrimination Act.”

He then referred to the brittle bone disease he has had all his life, saying:

“I was born disabled; I will die disabled. That is the hand I have been dealt. Indeed, it is the hand that most of us are likely to be dealt before our days are done. Are we seriously saying, as we near the end of the second decade of the 21st century, with all the amazing advances in medicine and technology, that we are so regressive, so insecure as a species, that we cannot cope with disability?”

Shinkwin then encouraged Theresa May, who is stepping down as leader of the Conservative Party, and therefore as British Prime Minister, on July 24, not to make the abortion of disabled babies part of her “legacy.”

“If she does, no one in my party should be surprised if disabled people and their families think that the Conservative Party hates us and believes that we would be better off dead,” he warned.

His full speech can be read here.

British Members of Parliament passed amendments earlier this month to legalize both abortion and homosexual “marriage” in Northern Ireland if the devolved Northern Ireland Assembly at Stormont is not restored by October 21.

The Bill was introduced by Labour MP Stella Creasy, who was born in England and represents the North London district of Walthamstow.

In 2017 Baron Shinkwin proposed a Bill that would outlaw all abortions in the UK carried out after 24 weeks. The current Abortion Act stipulates unborn children diagnosed with disabilities may be aborted after the 24 week limit, as late as deemed “necessary. Shinkwin called the UK’s abortion laws “a licence to kill disabled people.” His Bill was defeated.