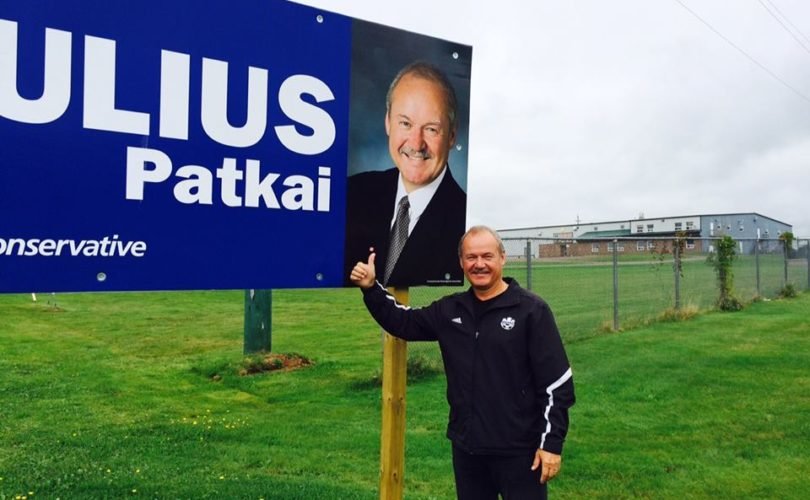 Update Oct. 1 2:37 PM EST: We were able to interview Patkai after publication. See his comments below.

“Our [Conservative] party basically allows the candidate to work with the conscience. Unfortunately the NDPs and Liberals do not. They have to follow the party line,” Julius Patkai, Conservative candidate for Cardigan, P.E.I., said on Tuesday in an all-party roundtable discussion for the riding on CBC Radio's Island Morning.

“I know Lawrence has compromised his core values about life — [about] pro-life — and he went with abortion,” said Patkai, adding: “I can’t support any of that. I'm very pro-life and that's where my conscience lies.”

Last year MacAulay disappointed pro-life constituents when he decided he would vote “pro-choice” after Trudeau issued a clear warning that “every single Liberal MP” must toe the party’s pro-abortion line when it comes to voting on the issue.

During the roundtable, MacAulay replied to Patkai’s charge against his integrity by touting his previous pro-life voting record. He ultimately ended, however, by saying that when given the choice of remaining uncompromisingly pro-life or continuing his political career, advancing his career trumped advancing the rights of the unborn.

“I had a choice of whether I would stay in politics or support the Charter of Rights and Freedoms. Is it easy? No, it's not. It hurts. But sometimes things change and I have to do it,” he said.

“It's been a very difficult issue for me,” he said, adding: “People know I'm pro-life.”

If MacAulay and the Liberal Party form government next month, he may soon find himself in Ottawa voting to fund the exportation of abortions to developing countries as part of the party’s plan on foreign policy. Earlier this week at the Munk Debate in Toronto, Trudeau spoke about the termination of unborn babies in developing countries as a mechanism for removing families from poverty. He suggested that ending the Conservative ban on funding abortions overseas would be Canada’s way of recommitting to “helping the most vulnerable.”

A poll earlier this month showed the Liberal lead on the island slipping from 45 to 38 percent while support for the Conservatives rose from 20 to 23 percent. The election is slated for October 19.

Patkai told LifeSiteNews that he is very fortunate to be a candidate for a party that allows MPs to vote according to their conscience on “sensitive issues” such as abortion. He believes in the value of every human life from its very beginning.

“Life begins certainly at the moment of conception,” he said. “Let me put it to you this way: I have two sons and one grandson, and I couldn’t see the world without any one of them.”

When asked if elected would he strive to introduce and pass laws as well as vote in favor of laws that aim at protecting pre-born children, Patkai responded that while his “personal conviction and core values” are pro-life, he would ultimately vote the way his constituents wanted him to vote.

“Their opinion is what I take to the table,” he said.

Patkai said that if constituents wanted him to vote in such a way that it would compromise his pro-life convictions, then, he said, “I won’t be there [serving them] very long.”