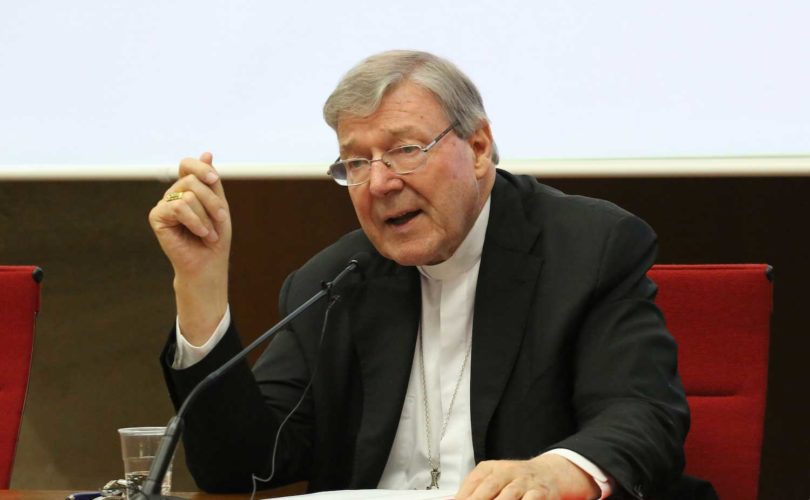 SYDNEY, Australia, September 25, 2020 (LifeSiteNews) — Cardinal George Pell, who had been tasked by Pope Francis in 2014 to clean up the Vatican’s finances, thanked the Pope for moving to “clean the stables” of the Vatican by accepting the resignation of a powerful Vatican official who in 2016 single-handedly canceled a planned external audit of Vatican finances.

“The Holy Father has elected to clean up Vatican finances,” the Australian cardinal wrote in an official statement dated today where he identifies himself as the former Prefect of the Secretariat for the Economy in the Vatican. “He plays a long game and is to be thanked and congratulated on recent developments. I hope the cleaning of the stables continues in both the Vatican and Victoria.”

Yesterday the Holy See announced that Cardinal Giovanni Angelo Becciù, 72, had offered Pope Francis his resignation and, very unusually, his rights as a cardinal. The most recent cardinal to be stripped of his rights, but not also expelled from the College of Cardinals, was the late Cardinal Keith O’Brien after being accused of sexual misconduct with priests.

Reasons for Becciù’s resignation were not given although there was much speculation yesterday that it involved his use of Vatican charity money to invest in a luxury real estate development in London when he was the Substitute for General Affairs at the Secretariat of State. Becciù held that role from 2011 until 2018 when Pope Francis made him first a cardinal and then Prefect of the Congregation for the Causes of the Saints.

Becciu was instrumental in April of 2016 in canceling an external audit of Vatican finances that had been planned by Cardinal Pell. The firm PriceWaterhouseCooper was scheduled to conduct the audit.

“Unilaterally, and without permission of Pope Francis, Becciu cancelled the audit and announced in a letter to all Vatican departments that it would not take place. When Pell challenged internally the audit’s cancellation, Becciu persuaded Pope Francis to give his decision ex post facto approval, sources inside the prefecture told CNA. The audit never took place,” reported Catholic News Agency in a 2019 report.

Today a weekly Italian newsmagazine called L’Espresso published an exclusive article explaining why Becciù resigned: the investigation into the London real estate development had turned up evidence that he had funneled Vatican assets to his own blood relations.

“With his business (Sogenel Holding of Lugano before and Azimut after), Crasso directed Vatican investments towards speculative funds headquartered in tax havens, money that had frequent turnovers and returned a minimal profit margin compared to the overall speculation,” Coccia continued.

“Moreover, the ‘Becciù method’ not only availed itself of characters like Enrico Crasso but also has a familial dimension: according to papers that we have seen, the Substitute of the Secretariat of State had asked and obtained twice from the Italian Episcopal Conference and once from the Peter’s Pence [charity] non repayable loans for the “Spes” cooperative, the operative arm of the Caritas [charity] of Ozieri… whose title-holder and legal representative is his brother Tonino.”

Coccia also reported that when Becciù was the apostolic nuncio in Angola and then in Cuba, his brother Francesco’s carpentry company furnished and modernized churches in both those countries.

Apparently, the cardinal also helped to enrich his brother Mario.

Professor Mario Becciù, a professor at the Salesian University in Rome, holds 95% of the shares of a food and beverage company called “Angel’s.” “Angel’s”  produces a beer called “Birra Pollicina”, but L’Espresso suggests that there is evidence that Cardinal Becciù directs its sales.

“Using the solidarity [i.e. fair trade] market, just like Tonino Becciù’s Spes cooperative, Mario Becciù’s company had produced and bottled “Birra Pollicina”, a beer that in reality can’t be found for sale and of which it is impossible to find any trace in distribution,” Coccia wrote, “except in a few locations and in orders appropriately addressed by ecclesiastical entities which, when consulted, have affirmed together that the order to buy the products from Angel’s came directly from Cardinal Becciù or people near him.”

There is some question, also, regarding the fair trade status of “Birra Pollicina.”

“Ultimately, it’s another conflict of interest without legal implications currently, but which generates a trail of profits,” Coccia stated.

The journalist also said that L’Espresso’s financial sources had indicated that the profits made by Becciù’s brothers’ companies would be placed in investment funds already vetted by the Secretariat of State.

The explosive L’Espresso article revealed also that Cardinal Becciù’s London real estate investment was just the latest in a series of investments that had lost the Vatican a lot of money.

Becciu told media today that he had not committed embezzlement. He added that he had not enriched his family, either. The cardinal says that the accusation concerning his brother’s beer will be the subject of a lawsuit.