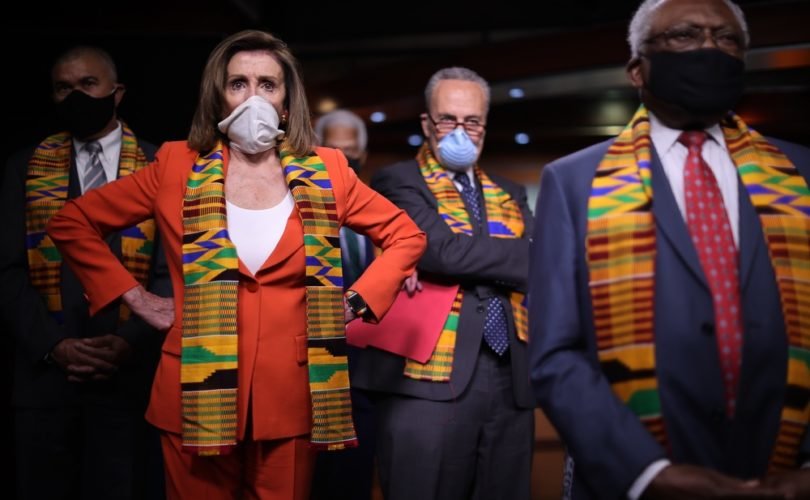 WASHINGTON, D.C., June 25, 2021 (LifeSiteNews) – In Democrats’ latest bid to keep the specter of “right-wing extremism” alive, House Speaker Nancy Pelosi has declared she will be convening a select committee to investigate the January 6 riot at the U.S. Capitol.

“This morning, with great solemnity and sadness, I am announcing that the House will be establishing a select committee on the Jan. 6 insurrection,” Pelosi said, the Daily Caller reports. “Jan. 6 was one of the darkest days in our nation’s history … it is imperative that we establish the truth of that day and ensure that an attack of that kind cannot happen and that we root out the causes of it all.”

Protesters broke into the U.S. Capitol building on January 6 after former President Donald Trump’s “March to Save America” rally, which was meant to encourage Republican lawmakers to formally object to the certification of electoral votes from a handful of states over concerns about vote fraud in the 2020 presidential election.

Viral videos showed some people engaging in physical altercations with police, pushing against security barricades, breaking through a window, trespassing in congressional offices, and climbing on walls, causing the vote certification to be suspended and lawmakers to be evacuated from the chambers. Many, however, were let into the Capitol by police and simply walked the halls after the initial breach.

The violence was started by people who either left Trump’s speech early or skipped it entirely, but House Democrats quickly moved to impeach Trump for supposedly “inciting” the violence through his rhetoric. The Senate voted 57-43 against Trump in his impeachment trial, but failed to amass the 67 votes necessary to convict and bar him from holding office in the future.

In May, Republicans killed a bill to establish a commission to investigate the riot. “Given the political misdirections that have marred this process, given the now duplicative and potentially counterproductive nature of this effort, and given the Speaker’s shortsighted scope that does not examine interrelated forms of political violence in America [committed by left-wing groups Antifa and Black Lives Matter], I cannot support this legislation,” House Minority Leader Kevin McCarthy said at the time.

Conservatives argue that Democrats only want a new commission for partisan reasons, to prolong their ability to tar conservatives and Republicans generally with the actions of fringe actors. Democrats say the GOP opposes a commission because they don’t want to get to the bottom of the events of January 6.

In fact, to whatever extent legitimate questions remain about the Capitol riot, they are already being investigated by at least six Senate committees and nine House committees and subcommittees.