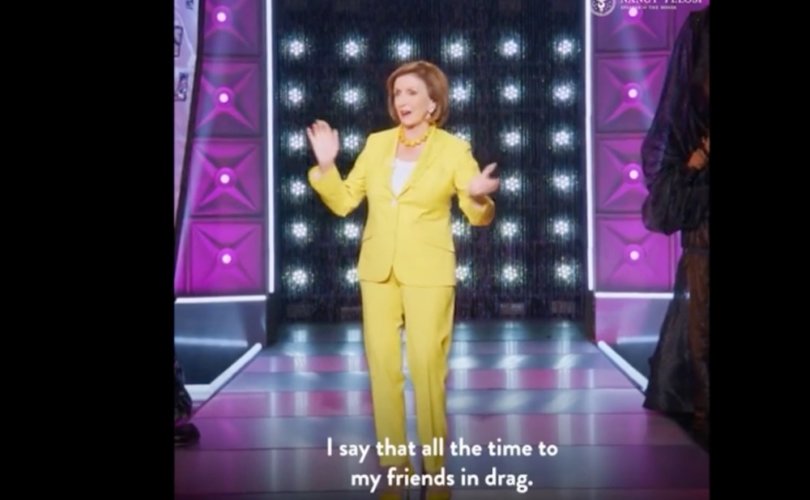 (LifeSiteNews) — Democrat Speaker of the House Nancy Pelosi, a self-professed Catholic, told a group of “drag queens” on a reality TV show last week that their ability to cross-dress and perform in sexually disordered shows is “what America is all about.”

Appearing on an episode of “RuPaul’s Drag Race,” a reality TV series in which men dressed as exaggerated versions of women compete to earn prizes and the title of “America’s Next Drag Superstar,” Pelosi thanked participants for “the joy and beauty” they “bring to the world.”

“Your freedom of expression of yourselves in drag is what America is all about,” the high-profile politician said.

“I say that all the time to my friends in drag,” she added.

Pelosi reiterated her support for cross-dressing men in a June 11 tweet.

“It was an honor to make an appearance on episode 5 of @RuPaulsDragRace All Stars 7 this week,” Pelosi said. “I was inspired by the contestants because they know their power. Their freedom of expression is what America is all about.”

It was an honor to make an appearance on episode 5 of @RuPaulsDragRace All Stars 7 this week. I was inspired by the contestants because they know their power. Their freedom of expression is what America is all about. #PrideMonth pic.twitter.com/d5D7wubRKp

The Daily Wire noted that this wasn’t the first time Pelosi has made an appearance on “RuPaul’s Drag Race.”

After joining the show for the first time in 2018, Pelosi told The Hollywood Reporter, “This idea of people believing in themselves, being themselves, taking pride in themselves, is not just a lesson for politicians but for everyone in the country. And that’s why I was so excited and couldn’t resist being on the show.”

For Pelosi, appearing on a drag queen reality TV show this month was important in light of the upcoming 2022 midterm elections in November.

“With the midterm elections coming up, it’s very important for people to make their voices and their vote heard,” she said.

Democrats are broadly expected to undergo a political trouncing in November when Americans head to the ballot box. Left-wing policies on issues including abortion, skyrocketing gas prices, COVID-19, parental rights in schools, and child gender transitioning have proved unpopular with voters.

Last week, Texas Republican state Rep. Bryan Slaton pledged to introduce legislation that would ban children from attending “drag shows and other inappropriate displays” after footage of minors at the drag show — hosted at a homosexual bar — went viral.

Florida Republican Gov. Ron DeSantis ​​has also stated that his staff is looking into legislation that would bar children from attending drag shows in the Sunshine State.