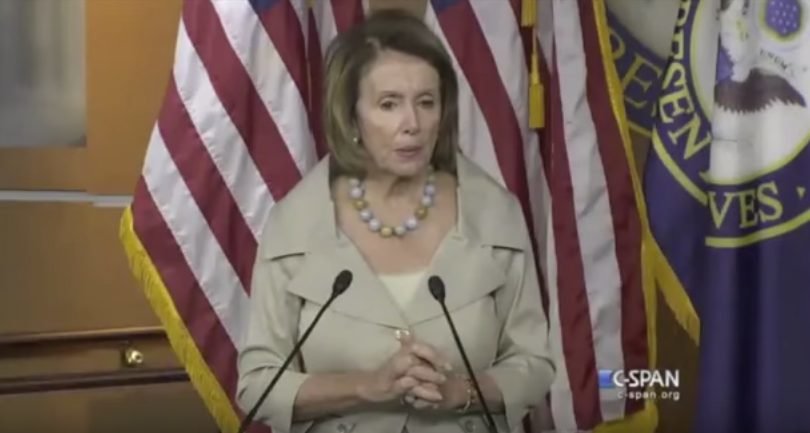 WASHINGTON, D.C., October 2, 2015 (LifeSiteNews) — Top Democrat Nancy Pelosi, D-CA, won't say whether an unborn child with a “human heart” and a “human liver” is a human being.

Pelosi, who is the Minority Leader in the House, was asked a question about the issue by CNS News at a press conference last week. The conservative news outlet asked, “In reference to funding for Planned Parenthood: Is an unborn baby with a human heart and a human liver a human being?”

Pelosi stumbled over her answer, saying, “Why don't you take your ideological questions–I don't, I don't have—”

CNS then asked her, “If it's not a human being, what species is it?”

It was then that Pelosi got back on stride, swatting aside the question with her accustomed reference to her “devout” Catholic faith.

“No, listen, I want to say something to you,” she said. “I don't know who you are and you're welcome to be here, freedom of this press. I am a devout practicing Catholic, a mother of five children. When my baby was born, my fifth child, my oldest child was six years old. I think I know more about this subject than you, with all due respect.”

“So it's not a human being, then?” pressed CNS, to which Pelosi said, “And I do not intend to respond to your questions, which have no basis in what public policy is that we do here.”

Pelosi has long used her self-proclaimed status as a “devout” practicing Catholic to promote abortion.

“As a practicing and respectful Catholic, this is sacred ground to me when we talk about this,” Pelosi said. “This shouldn't have anything to do with politics.”

In 2008, she was asked by then-Meet the Press host David Gregory about when life begins. Pelosi said that “as an ardent, practicing Catholic, this is an issue I have studied for a long time. And what I know is that over the centuries, the doctors of the Church have not been able to make that definition….We don't know.”

The Church has always taught that unborn human life is to be protected, and that such life is created at the moment of conception.