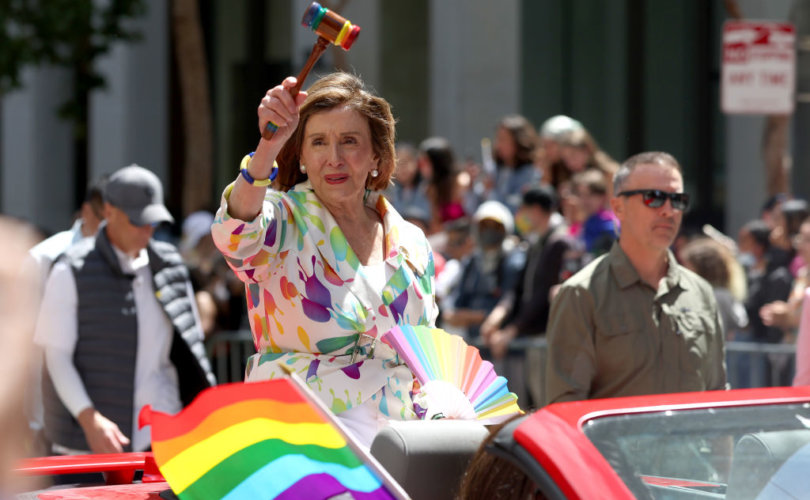 In a scathing “dear colleague” letter sent to Democrats Monday, arch-liberal Pelosi took aim at the Supreme Court for its decision to strike down the landmark 1973 Roe ruling which saw abortion imposed on all 50 states, lambasting the court as having shown “disrespect for a woman’s freedom over her reproductive health.”

JUST IN – Pelosi, the speaker of the US House, labels the Supreme Court an “extremist” body that punishes the American people. pic.twitter.com/ewLhR5AnN8

In response to the ruling, Pelosi demanded that her Democrat colleagues “must continue to fight to expand” access to abortion, which she called a kind of “freedom,” while deeming it “essential” for lawmakers to “protect and expand our pro-choice Majorities in the House and Senate” in the upcoming November elections.

“It is still appalling to me that the Chief Justice of the Supreme Court would agree that a Constitutional right does not exist if it was not spelled out explicitly and in public when the 14th Amendment was ratified over 150 years ago,” Pelosi added.

Contrary to the Speaker’s assertion of abortion access being a “freedom,” Justice Clarence Thomas wrote in his concurring opinion on Dobbs that “under our substantive due process precedents, the purported right to abortion is not a form of ‘liberty protected by the Due Process Clause,’” thus denying that there ever was a constitutional right to kill a child in the womb.

The justice continued, arguing that all other related cases which have relied on a “substantive due process” claim ought to be reconsidered, “including Griswold, Lawrence, and Obergefell,” which saw contraception, sodomy, and same-sex “marriage” legalized respectively.

Pelosi took umbrage with Thomas’ argument, saying his “disturbing concurrence, confirmed many of our deepest fears about where this decision [concerning Dobbs] may lead.” The Speaker described same-sex “marriage” and “access to contraception” as having “long-standing precedent” as well as being considered “cherished privacy rights” and “freedoms” for which “[l]egislation is being introduced to further codify.”

As a result of Friday’s ruling, and Thomas’ suggestions regarding “substantive due process” claims, Pelosi called the Supreme Court an “extremist” body which “works to punish and control the American people.”

Consequently, Pelosi highlighted the legislative “avenues” that the party will take to oppose outright bans on abortion across the country, including making clear “that Americans have the Constitutional right to travel freely and voluntarily throughout the United States” in order to kill the unborn in pro-abortion states as well as passing legislation which will “enshrine Roe v. Wade into the law of the land.”

She also stated her desire that the party work to “eliminate the filibuster” as part of plans to “restore women’s fundamental rights.”

Pelosi’s derision of the Supreme Court echoed her Friday statement, in which she condemned the justices who voted to overturn Roe as having “achieved their dark, extreme goal of ripping away a woman’s right to make their own reproductive health decisions.”

Her strong abortion advocacy comes despite holding a purportedly “devout” Catholic faith, a faith which stands in direct contrast with the pro-abortion position. The Catholic Church teaches that abortion is a “moral evil,” complicity in which “constitutes a grave offense” carrying the “canonical penalty of excommunication to this crime against human life.”

Taking steps to instruct Pelosi on the gravity of her open support for abortion, Archbishop Salvatore Cordileone of San Francisco announced in May that the Speaker of the House should not receive Holy Communion, which is forbidden to those in a state of grave sin, until she repents of her pro-abortion stance.