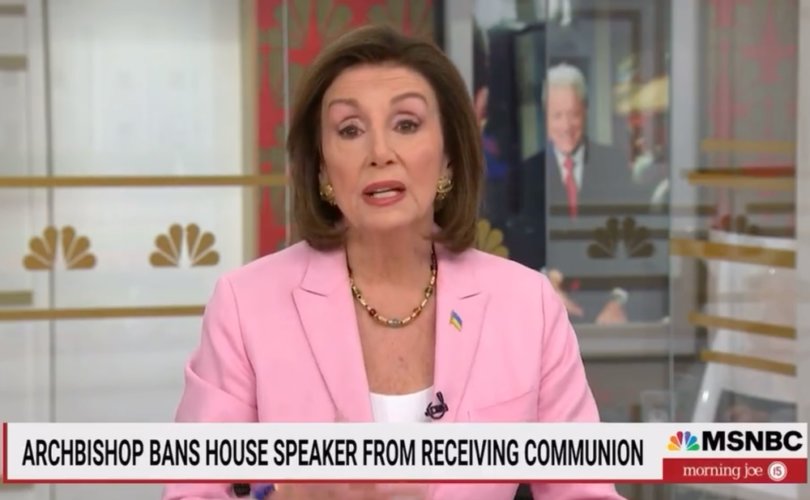 The self-professed Catholic, who has frequently and vocally supported abortion in contradiction of the teachings of the Catholic Church, argued during an interview on MSNBC’s “Morning Joe” that while she “respect[s]” the views of those who oppose abortion, she doesn’t respect people “foisting” those views “onto others.”

“We just have to be prayerful, we have to be respectful. I come from a largely pro-life Italian American Catholic family, so I respect people’s views about that, but I don’t respect us foisting it onto others,” Pelosi said.

According to Pelosi, the abortion issue has been weaponized by the “far right,” which she said also opposes “family planning,” in vitro fertilization (IVF), and contraception. IVF and contraception are both prohibited by the Catholic Church because they separate conception from the marital act.

“These people are against contraception, IVF…”

By “these people” she means the Church. It’s strange to cite the Church’s moral authority on the death penalty when she thinks the Church is so often wrong.

The 82-year-old politician’s comments come days after San Francisco Archbishop Salvatore Cordileone stunned the nation by issuing a formal notification instructing Pelosi not to receive the Holy Eucharist until she repudiates her support for abortion and confesses her sin in the Sacrament of Reconciliation.

“[Y]ou are not to present yourself for Holy Communion and, should you do so, you are not to be admitted to Holy Communion, until such time as you [publicly] repudiate your advocacy for the legitimacy of abortion and confess and receive absolution of this grave sin in the sacrament of Penance,” Cordileone wrote to Pelosi in a Thusday “notification” made public the following day (see PDF here).

RELATED: Pelosi refuses to answer whether a 15-week old unborn baby is human

The Catholic Church teaches that the Eucharist is the Body, Blood, Soul, and Divinity of Jesus Christ. According to Church teaching, no Catholic who is in a state of mortal sin may present himself for Holy Communion until he has confessed that sin and received absolution in the Sacrament of Confession.

In his notification barring Pelosi from receiving the Holy Eucharist, Cordileone cited the Code of Canon Law when he argued that “A Catholic legislator who supports procured abortion, after knowing the teaching of the Church, commits a manifestly grave sin which is a cause of most serious scandal to others. Therefore, universal Church law provides that such persons ‘are not to be admitted to Holy Communion’ (Code of Canon Law, can. 915).”

Canon 915 further instructs that “Those who have been excommunicated or interdicted after the imposition or declaration of the penalty and others obstinately persevering in manifest grave sin are not to be admitted to holy communion.”

RELATED: Banning Nancy Pelosi from Holy Communion is an act of love that could save her soul

During her Tuesday comments blasting her archbishop for imposing the penalty outlined in the Catechism, Pelosi went on to argue that Cordileone is also “vehemently against LGBTQ rights,” noting that he “led the way in an initiative on the ballot in California.”

In 2008, Archbishop Cordileone had championed Catholic teaching and traditional values by promoting Proposition 8, a constitutional amendment to ban gay “marriage” by legally asserting that “only marriage between a man and a woman is valid or recognized in California.” Proposition 8 was passed into law, however it was later overturned in court.

In her interview with MSNBC, Pelosi also highlighted her opposition to the death penalty, asking why the Church punishes Catholics who support abortion but doesn’t punish those who support capital punishment.

“I wonder about the death penalty, which I am opposed to,” she said. “So is the Church, but they take no action against people who may not share their view.”

The Catholic Church has traditionally taught that faithful Catholics may hold differing views regarding capital punishment, and throughout history the Church has recognized the death penalty as an acceptable response to grave crimes.

Pope Francis altered the teaching in the Catechism in 2017, declaring that capital punishment is “contrary to the Gospel” and therefore “inadmissible” regardless of the severity of the crime committed.

Unlike in the case of abortion, however, the Catechism of the Catholic Church does not require that legislators who support the death penalty be prohibited from receiving Holy Communion.

Meanwhile, it appears Pelosi has chosen not to comply with Cordileone’s instructions.

On Sunday, Pelosi defied the archbishop’s notification by receiving the Holy Eucharist during Mass at Holy Trinity Catholic Church in Georgetown, which is in the archdiocese of Washington, D.C.

LifeSiteNews reported that Cardinal Wilton Gregory of the Archdiocese of Washington, D.C., who made headlines in November 2020 when he affirmed that he would not deny Holy Communion to pro-abortion U.S. President Joe Biden, “has not instructed the priests of the [archdiocese] to refuse Communion to anyone.”

Cordileone’s decision to bar Pelosi from receiving the Holy Eucharist has sent shockwaves through the national political landscape, raising the ire of leftists who have demanded the archbishop’s resignation.

On Saturday, the editorial board of The San Francisco Examiner published a piece calling on Pope Francis to remove Cordileone from office.

Meanwhile, during a Monday episode of “The View,” Whoopi Goldberg attacked the prelate for following Catholic teaching to impose the pastoral restriction on Pelosi, arguing, “This is not your job, dude … that is not up to you to make that decision.”

Goldberg has been roundly criticized for the comment, with ​​Catholic pro-life non-profit American Life League pointing out that “It is LITERALLY the archbishop’s job to do this.”