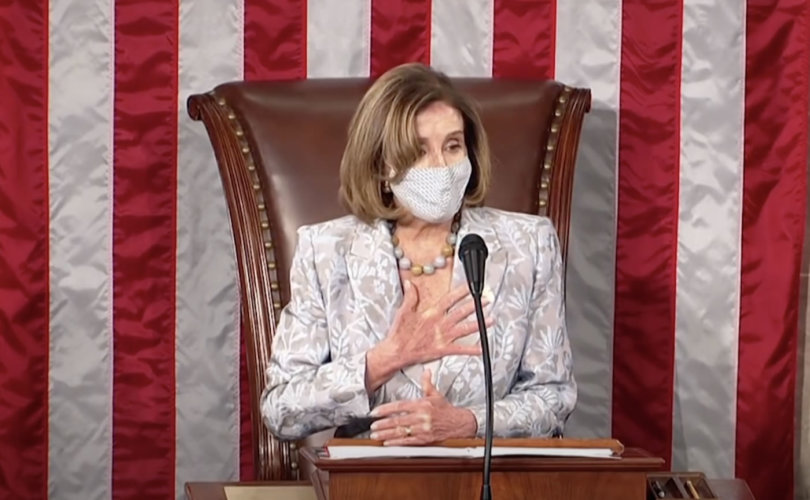 Rep. Nancy Pelosi reacts after being re-elected yesterday as Speaker of the House. Global News YouTube

WASHINGTON, D.C., January 4, 2021 (LifeSiteNews) – Yesterday, Speaker of the House Nancy Pelosi allowed a Democrat Congresswoman to vote in-person on the U.S. House of Representatives floor, despite a recent positive test for COVID-19. Rep. Gwen Moore, D-Wisconsin, traveled to the nation’s capital to cast a vote for Pelosi in her bid to be re-elected Speaker of the House, which she won but with a number of defections from her own party.

Moore announced via Twitter on December 28 that she had tested positive for COVID-19. She did not mention if she had tested “negative” before leaving her isolation.

Moore did post a message on January 3 saying she completed her quarantine and was “medically cleared to travel.”

There are two shorter forms of quarantine currently promoted by the Centers for Disease Control (CDC), with a 10-day version allowed if a person presents no symptoms without having a test, and a seven-day option permitted when done in conjunction with a negative test. It is not clear when Moore was diagnosed “positive” for COVID, or which of those two quarantine lengths she kept.

However, Pelosi managed to arrange the voting procedure to ensure that Moore, along with three other members of Congress, could partake in the vote for the Speaker of the House, despite the other three still being in their quarantine period.

“The day also wasn’t without some coronavirus-related drama,” Politico reported. “In a sign of just how delicate the vote count was, and with a recognition of the surging pandemic, House officials constructed a special plexiglass box in the chamber Sunday so that members who tested negative for the coronavirus but were quarantining after exposure — two Democrats and one Republican — could still cast their vote.”

“The move sparked outrage and head-scratching among lawmakers and House officials, some of whom openly questioned whether the speaker’s vote mattered more than the safety of lawmakers and staff.”

Important to note a few things:

-Rep. Gwen Moore is NOT one of the three, I'm told; She is officially out of her quarantine window https://t.co/L3W0h70yrc

Hse has set up a plexiglass box above the chamber (like something from a hockey rink) for some mbrs to vote, et al. Colleague Caroline McKee rpts Dem OH Rep Tim Ryan just voted for Pelosi from the box

Commenting on the move, Republican Rapid Response director Steve Guest noted, “The coronavirus won’t stop Nancy Pelosi’s quest for power. Democrat Rep. Gwen Moore announced a positive coronavirus test 6 days ago. She hasn’t been in DC since May & has been voting by proxy. But because Pelosi wants power, despite being COVID +, Moore is headed back to DC.”

She hasn’t been in DC since May & has been voting by proxy.

But because Pelosi wants power, despite being COVID +, Moore is headed back to DC. https://t.co/iHUpfWVnba

Pelosi’s recent machinations of the voting logistics run in stark contrast to Democrats’ obsession with ensuring that Graham took a coronavirus test before the Barrett hearings. Senate Minority Leader Schumer, D–New York, demanded that GOP members of the Senate have mandatory testing for both senators and staff before the Barrett hearings, warning that not doing so would be “intentionally reckless.”

Senators Kamala Harris, Patrick Leahy, and Cory Booker added their names to the hounding of Graham, warning that the Barrett hearings could become a “super-spreader” of the virus and asking that the hearings be cancelled until a “clear testing regime is in place.”