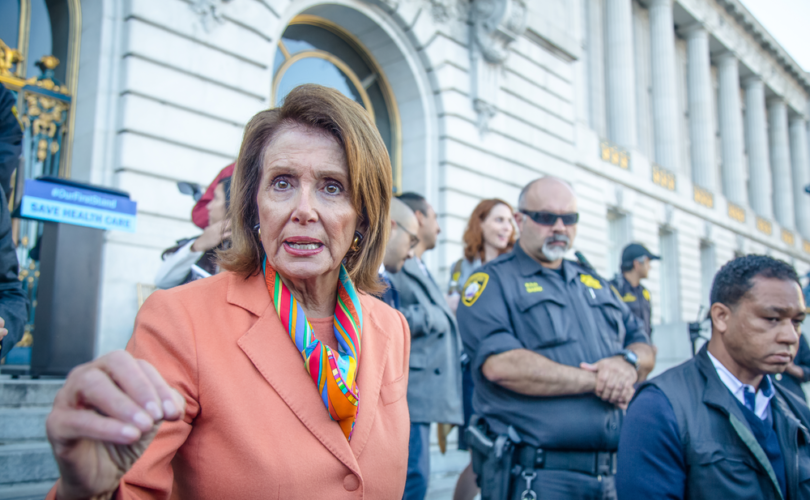 WASHINGTON, D.C. (LifeSiteNews) – Democrat Speaker of the House Nancy Pelosi suggested this week that the legislative filibuster should be abolished from U.S. Senate rules so Democrats can more easily enshrine abortion-on-demand and same-sex “marriage” in federal law.

“Elections have consequences, and if we can just pick up a couple more Democratic senators to wipe back the filibuster, then we can again enshrine into the law a woman’s right to choose, enshrine marriage equality into the law, so that we don’t have fear of again diminishing freedom in our country,” Pelosi told a crowd of supporters. “Our history has always been to expand freedom. The courts have played a role in that, and now they may roll it back. But I have hope because of all of you.”

PELOSI: “Elections have consequences, and if we can just pick up a couple more Democratic senators to wipe back the filibuster, then we can again enshrine into the law a woman’s right to choose, enshrine marriage equality into the law, so that we don’t have fear.” pic.twitter.com/s8E5IP01nq

In preparation for a near future in which the elected branches of Congress may once again be free to directly prohibit abortion, Democrats and their allies have renewed their pushes to codify the “right” to abortion in federal and state law, something they cannot muster the Senate votes to achieve under the chamber’s current filibuster rules, which require 60 votes for most types of legislation.

Abolishing the legislative filibuster would enable controversial bills to pass with a simple majority, but Democrat Sens. Kyrsten Sinema and Mark Kelly of Arizona and Joe Manchin of West Virginia have opposed going that far, to the frustration of left-wing activists.

Pelosi’s comments also reflect one of Democrats’ favorite talking points in response to the Dobbs leak, which is to stoke fears of an “extremist” Court overturning other unrelated precedents.

While many originalist conservatives would like to see an overturn of 2015’s Obergefell v. Hodges, which forced all 50 states to recognize same-sex “marriages,” there is currently no indication that the Supreme Court is inclined to reverse it, that a case to raise the issue is anywhere close to reaching the nation’s highest court, or that the Republican Party currently has any appetite for such a battle.

Pelosi, meanwhile, has long been a pro-abortion absolutist despite her self-identification as a “practicing, devout Catholic,” even in the face of a recent rebuke from San Francisco Archbishop Salvatore Cordileone, who formally barred her from receiving Holy Communion over her anti-life stance. In the wake of the Dobbs leak, she endorsed the “righteous anger” of leftists at a time when leftists were threatening Republican-appointed Supreme Court justices by posting directions to their homes for protests.