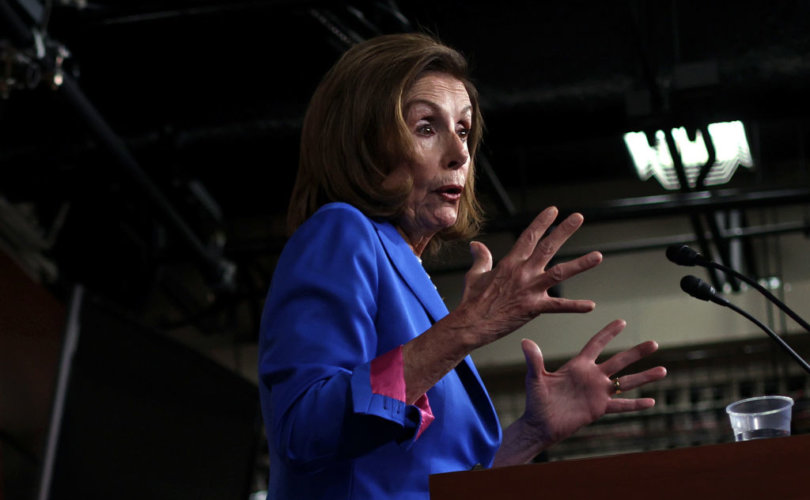 WASHINGTON, D.C. (LifeSiteNews) – CNN’s Dana Bash and Speaker of the House Nancy Pelosi agreed Sunday that private businesses should be “encouraged” to subsidize travel for out-of-state abortions if the Supreme Court overturns Roe v. Wade and allows states to set their own abortion laws.

On May 2, Politico published a leaked draft of a majority opinion by conservative Justice Samuel Alito for Dobbs, which concerns Mississippi’s 15-week abortion ban. The draft declares that “Roe was egregiously wrong from the start,” and therefore it is “time to heed the Constitution and return the issue of abortion to the people’s elected representatives.” In response, the Court announced the draft was authentic but “does not represent a final decision by the court or the final position of any member on the issues in the case.”

Pelosi, who has endorsed the protesters’ “righteous anger,” appeared on CNN’s State of the Union Sunday, where Bash asked her, “What can you do to help women who will be seeking abortions, but live in states where it’s banned? For example, would you encourage private companies to provide travel for abortions as a health benefit?”

Pelosi answered “of course” before launching into an attack on the Supreme Court, accusing it of having “taken back a freedom that was defined by precedent and respect for privacy” for the “first time” in U.S. history.

“But it’s also important to know that this is not right,” she claimed. “This is not the path of freedom for our country. So they’re putting freedom on the ballot. And our democracy has been on the ballot because of what they have — are doing to elections.”

Pelosi again invoked her self-identification “as a practicing, devout Catholic, five children in six years and one week, I don’t disrespect people’s views and how they want to live their lives. But I don’t think that it’s up to the Donald Trump appointees on the court or any politicians to make that decision for women.”

She added that the current Supreme Court was “dangerous to the freedoms of our country,” and Americans should “beware in terms of marriage equality. Beware in terms of other aspects of it.”

If Alito’s opinion does prove to be the Supreme Court’s final decision, it would not end abortion, but restore the subject to the democratic process and all it entails. More than 20 states currently have laws on the books that would effectively ban abortion within their borders upon Roe’s fall, from pre-Roe abortion bans that went unenforced to “trigger laws” designed not to take effect until a ruling like today’s. In those states, abortion would become illegal as soon as the ruling is issued, though legislatures would be free to repeal those laws.

Pelosi’s comments, along with moves from pro-abortion states like California announcing millions of taxpayer spending to prop up the abortion industry, indicates an emerging response plan from the abortion lobby: exploit a post-Roe world’s decentralization of abortion rules by focusing on the facilitation of interstate abortion travel. If successful, the only viable remedy would be for pro-lifers in Congress to pursue a nationwide abortion ban, which most pro-lifers already consider to be the ultimate goal of the pro-life movement.