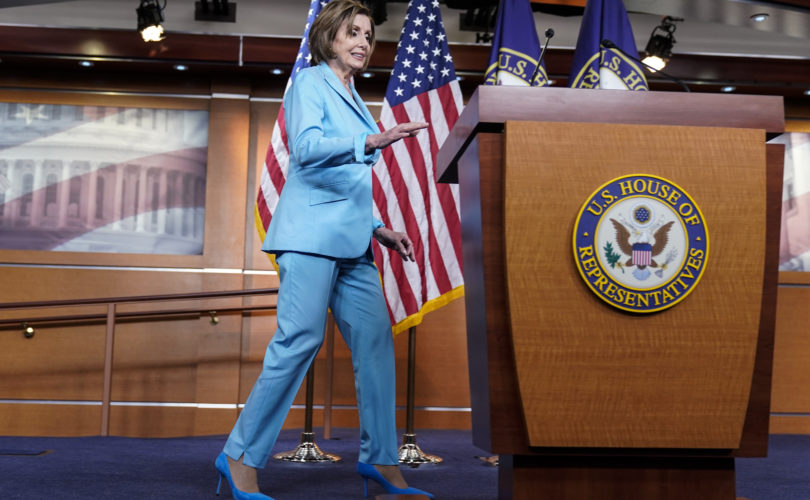 WASHINGTON, June 21, 2021 (LifeSiteNews) — Pro-abortion Speaker of the House Nancy Pelosi (D-CA) ducked a question from a reporter who asked whether a 15-week-old unborn baby is human. Pelosi refused to respond directly, instead saying she is “a big supporter of Roe v. Wade” with “some standing” on the issue because she has children of her own.

At a press briefing on Capitol Hill Thursday, reporter Julia Johnson of CNSNews asked Pelosi, “Is an unborn baby at 15 weeks a human being?”

“Let me just say that I am a big supporter of Roe v. Wade,” Pelosi answered. “I am a mother of five children in six years. I think I have some standing on this issue as to respecting a woman’s right to choose.”

When Johnson attempted to press Pelosi further by repeating the question, the Speaker of the House ignored her and took questions from other reporters.

The question posed by Johnson on the humanity of a 15-week old unborn baby was in reference to a Mississippi law banning abortions after 15 weeks gestation.

The law, entitled the Mississippi Gestational Age Act, was passed in 2018 but blocked by the 5th U.S. Circuit Court of Appeals for conflicting with Roe v. Wade. Now the Supreme Court — nominally with a 6-3 conservative majority — has agreed to review the legality of the Mississippi ban, a move which has reignited political debate about the constitutionality of abortion and the personhood of unborn babies.

Pro-life champion and author Fr. Frank Pavone, who is the national director of Priests for Life, the largest pro-life ministry in the Catholic Church, told LifeSiteNews Monday that “Nancy Pelosi’s failure to answer this question, which a grade-school biology student can answer, is yet another indication of the deep denial that marks abortion supporters.”

Pavone, who served as co-chair of the Pro-Life Voices for Trump coalition and was a member of the Catholics for Trump advisory board last year, added that “[i]nstead of the mental gymnastics [Pelosi] engages in, she should ‘follow the science.’”

Pelosi’s comments last week were very similar to remarks she made in 2015, when CNS reporters asked her whether a 20-week-old unborn baby is a human being. As she did last week, Pelosi claimed that the fact that she has five children gives her authority to speak on the issue, adding that she has more authority on the matter than her colleagues, and apparently even the Pope.

“And as a mother of five, in six years, I have great standing on this issue, great understanding of it, more than my colleagues,” Pelosi told the reporter, adding that when she was a new member of Congress and a Catholic mother of five fighting to advance a pro-abortion agenda, a Republican congressman remarked that “Nancy Pelosi thinks she knows more about having babies than the pope.’”

Pelosi’s dodge of the question last week is not likely to tamp down debate as the question of abortion heats up ahead of the Supreme Court’s hearing of the Mississippi abortion ban case.

The case has generated considerable buzz among both the pro-life and the pro-abortion constituencies, with pro-life advocates hopeful that the case could trigger a reassessment of the legal basis of Roe v. Wade, the infamous 1973 court decision which gave constitutional protection to abortion. This has caused concern among pro-abortion groups that Roe v. Wade might actually be overturned.

“If the Supreme Court rules in favor of Mississippi, it will take the decision about whether to have an abortion away from individuals and hand it over to politicians,” Dalven said.

If Roe v. Wade were to be overturned by the Supreme Court, the question of the legality of abortion would be determined by the states. It is to be anticipated that some states will continue to assert a legal right to abortion, while others will ban it.

Last week, in anticipation of the Court potentially overturning Roe v. Wade, Texas Gov. Greg Abbott signed a bill on Thursday which would ban all abortions in his state, without exceptions for rape or incest, and take effect within 30 days after Roe v. Wade is overturned.

The Supreme Court is set to take up Dobbs v. Jackson Women’s Health Organization in October and is expected to reach its decision by June of next year.