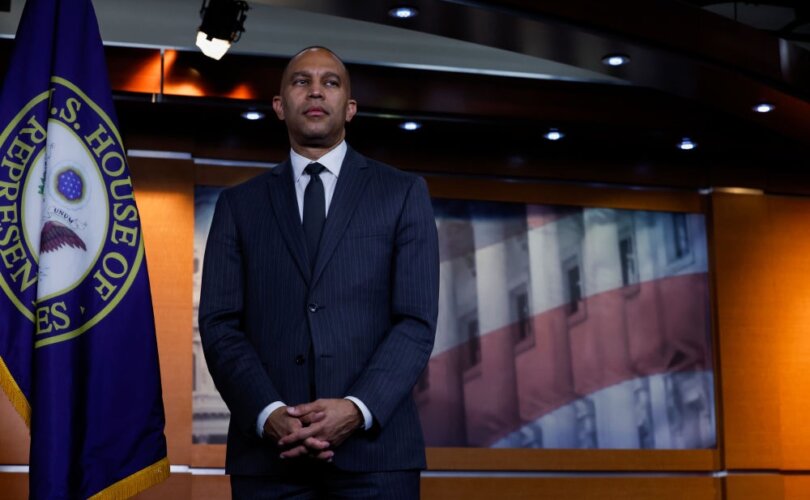 Pelosi’s decision to step down came as Republicans were officially projected to take over the House, setting up a major roadblock to the Biden administration’s national legislative agenda.

Conservative outlets and commentators have pointed out that the replacement for Pelosi, a divisive and far-left figure, shows no signs of reaching across the aisle with committed conservatives.

In a Wednesday report highlighting Jeffries’ election to the leadership role, the Daily Wire noted that the New York Democrat “has repeatedly painted conservatives as racists,” even going so far as to suggest that the conservative majority of the U.S. Supreme Court (which includes black conservative justice Clarence Thomas) lacked “legitimacy” and was reminiscent of the slave-owning “confederacy.”

Beyond attacking the Supreme Court, Jeffries has also generated widespread backlash from conservatives for openly suggesting that former President Donald Trump had been illegitimately elected.

In a December 2 Twitter thread, the Republican National Committee highlighted 13 times that Jeffries “denied election results,” including a tweet in which he called Trump a “FAKE president” due to alleged Russian interference.

1. Jeffries said “the more we learn about 2016 election the more ILLEGITIMATE it becomes.” pic.twitter.com/7qI0zI7yHR

In a congressional hearing, Jeffries argued in reference to the 2016 election that “Russia interfered with our election, attacked our democracy, for the sole purpose of artificially placing someone at 1600 Pennsylvania Avenue. They were successful.”

Jeffries struck a different tone when it came to challenges to the legitimacy of the 2020 presidential election.

In a video pinned to Jeffries’ Twitter account, he called on Justice Clarence Thomas to confront his wife Ginni regarding the 2020 election, arguing that Ginni “refused to accept the 2020 presidential election. Why? Because she didn’t like the outcome.”

Jeffries also drew backlash for his perspective on one of the most headline-grabbing incidents of the Black Lives Matters (BLM) riots that rocked the country during the summer of 2020.

Last year, the Daily Wire pointed out, Jeffries called for Kyle Rittenhouse — the teen who killed two men and injured another in self-defense during a violent BLM riot — to be imprisoned without hope of release.

On Monday, Jeffries vowed to pursue a progressive agenda in spite of the conservative intentions of some of his Republican colleagues.

“There are some in Washington who want to turn back the clock,” he said in a tweet. “Not going to happen.”

“House Dems will continue to move America forward,” he added.

The comments came after Jeffries aimed a blow at conservative lawmakers slated to soon take over control of the House, arguing in a Sunday interview “there’s a real risk that the incoming Republican majority is being hijacked by the extremists who have grown in ranks.”