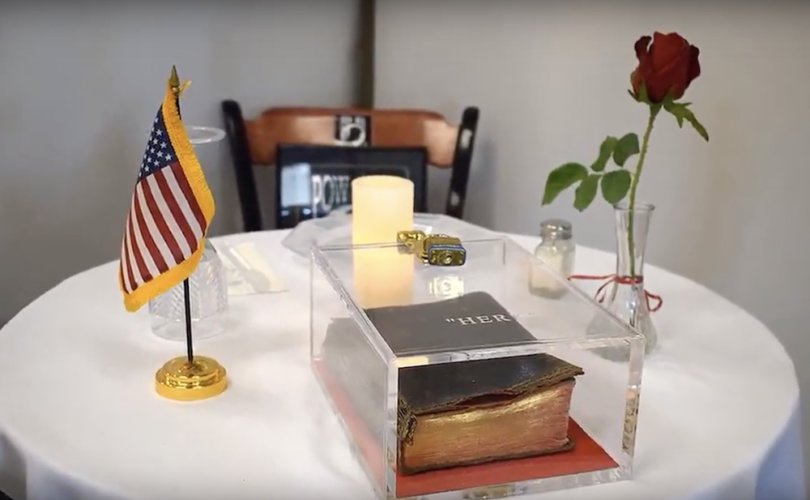 INDIANAPOLIS, September 3, 2019 (LifeSiteNews) – During remarks before the American Legion last week, Vice President Mike Pence took the opportunity to express the administration’s support for a Bible that has come under fire at a Veterans Affairs hospital in New Hampshire.

In May, the so-called Military Religious Freedom Foundation (MRFF) filed a lawsuit against VA medical center in Manchester, New Hampshire, over a Bible on display in its lobby, part of a Missing Man Table meant to honor soldiers absent from a dining hall because they are prisoners of war or otherwise missing in action. Every element of a Missing Man Table serves a symbolic purpose, from the table’s round shape symbolizing “everlasting concern” to a Bible representing “strength gained through faith to sustain us and those lost from our country, founded as one nation under God.”

“That is stamping it with the approval of raising one faith over all the others,” MRFF founder Mikey Weinstein said. “From our perspective, it’s a repugnant example of fundamentalist Christian triumphalism, exceptionalism, superiority, and domination, and it cannot stand.” The plaintiff in MRFF's lawsuit is veteran James Chamberlain, whom the group says is a “devout Christian” yet believes the Bible sends an “exclusionary” message to other veterans.

The VA responded at the time by explaining that they initially removed the Bible in January out of an “abundance of caution,” but restored it after an outpouring of pro-Bible complaints and consultation with legal counsel. The Bible will “remain indefinitely as part of the missing man display, a secular tribute to America’s POW/MIA community.”

The MRFF suit is “nothing more than an attempt to force VA into censoring a show of respect for America’s POW/MIA community,” national VA spokesman Curt Cashour declared in May. “Make no mistake, VA will not be bullied on this issue.”

Last Wednesday, Pence delivered a half-hour address at the 101st American Legion National Convention in Indianapolis, where he promised that the Trump administration “will always make room for the spiritual needs of our heroes at the VA as well” as their health needs.

“You might’ve heard even today that there’s a lawsuit to remove a Bible that was carried in World War II from a Missing Man table at a VA hospital in New Hampshire,” the vice president continued. “It’s really no surprise because, under the last administration, VA hospitals were removing Bibles and even banning Christmas carols in an effort to be politically correct.”

“Let me be clear: Under this (administration), VA hospitals will not be religion-free zones,” Pence declared. “We will respect the freedom of religion for every veteran of every faith. New Hampshire VA — the Bible stays!”

The Indianapolis Star reported that Pence’s declaration of support for the Bible received “perhaps the biggest applause” of his speech.

The MRFF has taken credit for getting Bibles removed from Missing Man Tables across the country. The group has a long record of hostility to benign Christian expression in the military, including demanding punishment for chaplains who wore their uniforms to an event hosted by a religious liberty group and agitating for heavy restrictions on proselytizing by military chaplains.

“In 2015, (Weinstein) wrote a blog post calling for the ousting of Christian chaplains who disagree with same-sex ‘marriage,’ and also demanded that Satan, Allah Odin and others be added to a ‘God bless the military’ display in Hawaii,” Christian News noted.