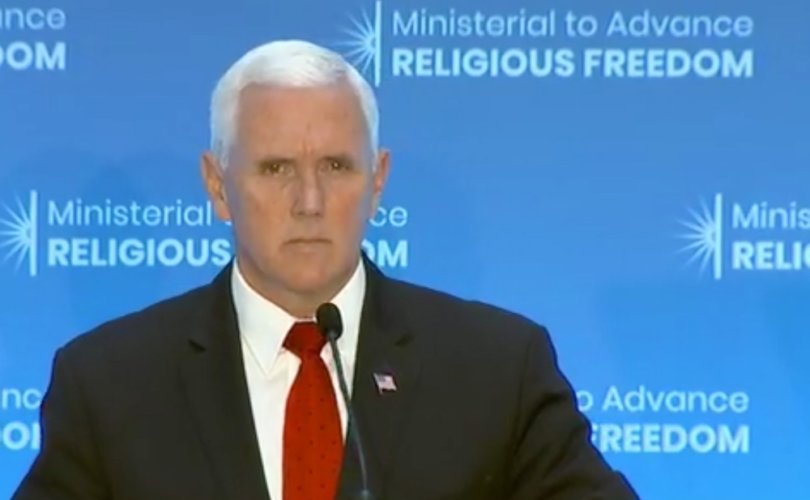 WASHINGTON, D.C., July 26, 2018 (LifeSiteNews) – The U.S. State Department hosted its first annual Ministerial to Advance Religious Freedom this week, where Vice President Mike Pence and Secretary of State Mike Pompeo detailed the importance of the cause to the Trump Administration.

Pence opened his remarks addressed to representatives from eighty nations by stating that “religious freedom is a top priority of this administration.”

The event consisted of a “broad range of stakeholders, including foreign ministers, international organization representatives, religious leaders, and civil society representatives” who gathered “to discuss challenges, identify concrete ways to combat religious persecution and discrimination, and ensure greater respect for religious freedom for all,” according to the State Department. The Washington Free Beacon adds that attendees also heard the first-hand accounts of victims of persecution.

Pence and Pompeo spoke Thursday, in remarks that can be seen in their entirety below. “This event truly reflects President Trump’s ironclad commitment to protecting this important liberty,” Pompeo said, which “is not exclusively an American right. It is a God-given, universal right bestowed on all of mankind.”

Pompeo also announced that Thursday would see the release of the Potomac Declaration and the Potomac Plan of Action, documents that reaffirm the United States’ stance and “recommend concrete ways the international community and governments can do more to protect religious freedom and vulnerable religious communities.”

“The American founders enshrined religious freedom as the first freedom in the Constitution of the United States, and America has always and will always lead the world by our example,” the vice president said. He argued that cultures which don’t respect religious liberty are invariably more violent and less democratic, cultivating strife that imperils global peace and security by bleeding into neighboring countries.

Pence discussed examples of oppression in various countries such as China, Iran, and North Korea. “There is no escaping the plain fact that North Korea’s leadership has exacted unparalleled privation and cruelty upon its people for decades,” he said. But he also stressed that religious discrimination remains very real in Western democracies, as well, highlighting the fact that “just seventy years after the Holocaust, attacks on Jews, even on aging Holocaust survivors, are growing at an alarming rate” across Europe.

As far as the administration's responses, Pence announced the creation of a Genocide Recovery and Persecution Response Program to help the State Department and USAID coordinate relief efforts with local faith and community leaders; and an International Religious Freedom Fund through which the U.S. and other nations can cooperate to support religious freedom efforts worldwide.

The Vice President also addressed the case of evangelical pastor Andrew Brunson, who has been imprisoned in Turkey for almost two years yet was transferred from prison to house arrest yesterday. Pence said the “welcome first step” was insufficient, and warned that if “Turkey does not take immediate action to free this innocent man of faith and send him home to America, the United States will impose significant sanctions on Turkey until Pastor Andrew Brunson is free.”

President Trump has made religious liberty a priority of his administration. In addition to Pence and Pompeo, he has hired social conservative champions such as Roger Severino to influential positions in the bureaucracy, nominated constitutional originalists to the federal courts, lifted his predecessor’s mandate forcing religious groups to fund contraception, and established a new White House office tasked with fielding the concerns of religious Americans and monitoring threats as they arise.