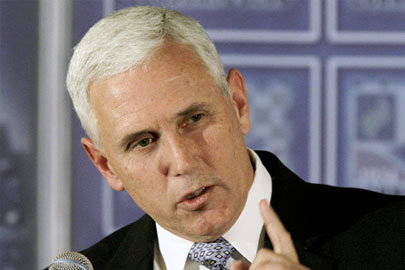 October 7, 2016 (LifeSiteNews) — A Trump-Pence administration will “err on the side of freedom” when it comes to religious liberty and empower local communities to address issues of bathroom privacy because the government “has no business imposing its will or its values” in that arena, Gov. Mike Pence told Dr. James Dobson on his radio show Wednesday.

Pence and his wife, Karen, were guests on the pro-family leader’s Family Talk show. Pence told Dobson that Donald Trump will appoint judges “to the Supreme Court and all of our courts in the tradition of the late and great Justice Antonin Scalia.”

“I couldn’t be more proud to stand with him [on] that,” Pence said.

The Republican vice presidential nominee blasted the HHS abortion and contraception mandate that is attempting to force the Little Sisters of the Poor and many other faith-based institutions to formally cooperate via their employee health plans in the provision of life-ending drugs and devices.

“What I can tell you is that a Trump-Pence administration will be dedicated to preserving the liberties of our people, including the freedom of religion that’s enshrined in our bill of rights,” Pence said. “We have a long tradition in this country of accommodating religious belief and respecting religious belief. But under this administration, you’ve seen the heavy hand of government — whether it be in the Hobby Lobby case or whether it be in the Little Sisters of the Poor [case] — where there is an unwillingness by the administration to accommodate the religious sensibilities and convictions of ministries or private organizations.”

The imposition of transgenderism on the country and new regulations attempting to force employers to fund “sex change” surgery are “such an example of” how under the Obama administration, there is “no area of our lives too small to … regulate, no aspect of our Constitution too large for them to be willing to ignore.”

“Donald Trump and I both believe [these issues] not only can be resolved with common sense at the local level, but they are every single day,” Pence said. “They should be resolved with the safety and well-being of our children first and foremost, their privacy interest and rights, and with common sense. Donald Trump and I simply believe that all of these issues are best resolved at the state level by the people of communities.”

Blasting the “heavy hand and liberal agenda” of the Obama administration, Pence said, “We’ll educate all of our kids, we’ll figure our way through these issues, but Washington has no business imposing its will or its values on communities around the nation.”

Pence said the administration under which he would be vice president would address issues of clashes between religious liberty and alleged discrimination through the courts, as has been “done throughout the history of this nation.”

“I truly believe that ensuring that we have people appointed to the court who will respect our Constitution and respect the God-given liberties that are enshrined there is very much, very much on the ballot this year,” he said.