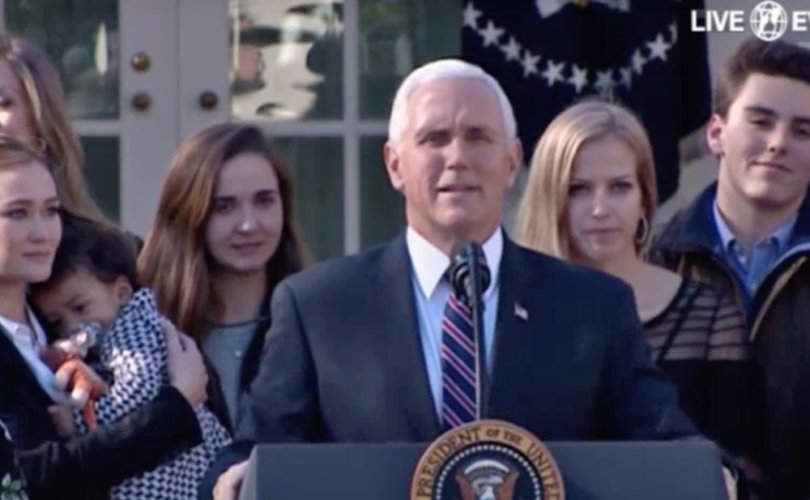 WASHINGTON, D.C., January 19, 2018 (LifeSiteNews) — The United States is on the verge of restoring “the sanctity of life to the center of American law,” and the Trump administration is completely backing the move, Vice President Mike Pence told pro-lifers at the March for Life in Washington D.C. Friday.

“This pro-life generation should never doubt we’re with you,” Pence told the hundreds of thousands gathered in the Washington Mall during a live-streamed video from the White House Rose Garden.

“This president stands with you, and He who said ‘Before I formed you in the womb, I knew you,’ is with you as well.”

“This president stands with you, and He who said ‘Before I formed you in the womb, I knew you,’ is with you as well.”

The March for Life, which organizers say is the “largest annual human rights demonstration in the world,” marks the 45th anniversary of Roe v Wade ruling of January 22, 1973, in which the Supreme Court struck down abortion laws.

Since then, an estimated 60 million children have been killed by abortion in the United States.

READ: Trump’s historic speech to March for Life: Abortion is ‘wrong, it has to change’

But in brief remarks before introducing President Trump, Pence contended things are changing.

“My friends, life is winning in America because ‘Love Saves Lives’,” the vice president declared, referencing the theme of this year’s March.

“I believe with all of my heart, with your continued dedication and compassion, with pro-life majorities in the Congress, with President Donald Trump in this White House and with God’s help, we will restore the sanctity of life to the center of American law,” Pence said, to a roar of cheers from the crowd.

Saturday marks the first anniversary of the inauguration of the “most pro-life president in American history, President Donald Trump,” noted Pence.

“From preventing taxpayer dollars from funding abortion overseas, to empowering states to respect life in Title X, to nominating judges who will uphold our God-given liberties enshrined in the constitution of the United States, this president has been a tireless defender of life and conscience in America,” he said.

“And today, President Trump will do even more to defend the most vulnerable in our society,” Pence added.

READ: Hundreds of thousands of pro-lifers backed by Trump march for life in D.C.

Indeed, the Trump administration’s Department of Health and Human Services (HHS) announced Friday it is rescinding the Obama administration’s decree to state governments that they cannot deny Medicaid funds to Planned Parenthood because it is an abortion provider.

Meanwhile, the U.S. House voted earlier on the day of the March to pass a bill protecting babies born alive during botched abortions,  in what pro-life advocates are hailing as a momentous pro-life win.

Trump has promised to sign the Born-Alive Abortion Survivors Protection Act into law when it comes to his desk.

The vice president heaped accolades on the pro-life movement in his address.

“More than 240 years ago, our founders wrote words that have echoed through the ages. They declared these truths to be self-evident, that we are each of us endowed by our Creator with certain inalienable rights, and that among these are life, liberty and the pursuit of happiness,” he said.

“Forty-five years ago the United States turned its back on the unalienable rights of life, but in that movement, our movement began…a movement that continues to win hearts and minds,” he said.

“Know as you march for life that your compassion, your persistence, your activism, and your prayers are saving lives,” said Pence, an evangelical Christian.

In his first year in office, Trump reinstated the Mexico City Policy, which prevents U.S. foreign aid from going to organizations that commit or promote abortion abroad. He signed a law allowing states to defund Planned Parenthood, appointed a number of strong pro-life advocates to key administration positions, and ended Obama's HHS contraception and abortion pill mandate requiring employers to violate their consciences.

Trump’s administration also stood up for life and family at the United Nations, cutting funding the pro-abortion UNFPA, and pulling out of the pro-abortion, pro-LGBT UNESCO.