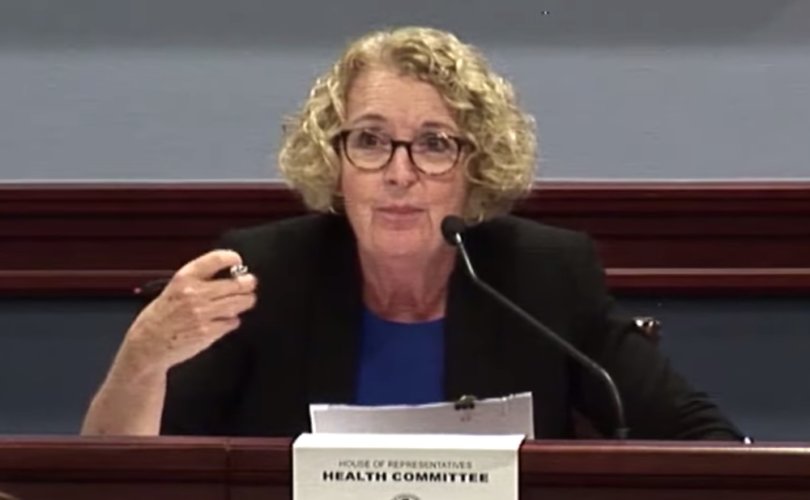 November 5, 2019 (LifeSiteNews) – The Democrat state lawmaker who came under fire last week for referring to miscarried babies as “just some mess on a napkin” has issued an apology for her “poorly chosen” language, but many women are deeming it insufficient to account for her original comments.

During a hearing on proposed legislation to provide for humane burial of miscarried or aborted babies, Pennsylvania state Rep. Wendy Ullman said the following while objecting to the bill: “It refers specifically to the product of conception after fertilization which covers an awful lot of territory. I think we all understand the concept of the loss of a fetus, but we’re also talking about a woman who comes into a facility and is having cramps and — not to be, not to be, concrete — an early miscarriage is just some mess on a napkin.”

Tom Shaheen, vice president of the Policy for Pennsylvania Family Institute, which publicized video of the incident, summarized the pro-life objection to Ullman’s remarks by declaring “a miscarriage, no matter how early, does not result in a ‘mess on a napkin’ but the loss of a child. Each human life deserves respect, even when lost at an early stage in development.”

On November 1, Ullman explained that she had “struggled for words” while “relaying a story of my family friend,” and the result was that her “words were poorly chosen, and I apologize. I remain steadfast that every single step of a medical process, including the handling of remains, should be decided by a patient and her doctor”:

Some would choose donation for medical research, like my family friend, who I quoted in a committee meeting, saying, “So my loss can have meaning.” 2/4

This issue is intensely important to me, and that’s why I struggled for words.  My words were poorly chosen, and I apologize. I remain steadfast that every single step of a medical process, including  the handling of remains, should be decided by a patient and  her doctor.  4/4

On Monday, The Daily Wire compiled reactions from numerous readers who did not accept Ullman’s explanation:

Do I seem angry to you, @RepUllman? Good. Because women who have had miscarriages deserve respect and if I need to stand up to garbage like you, who seek to deny the humanity of our children in pursuit of your ghoulish agenda, so be it. Women deserve better than you.

@RepUllman This issue is also intensely important to me.  Let me try to be clear so that you can understand. That “mess” is a baby, a child, a human being. You callously disregarded human life in all its glory and the beautiful process we all go through till the end of our lives.

Poorly chosen is a gross understatement. It was cruel.

Tell my mother, aunt, sister and sister-in-law that their miscarriages were nothing. Resign and disappear.

Most other readers of the lawmaker’s thread found her “apology” insufficient:

You are a disgrace to Bucks County and the entire state of PA. The only thing “concrete” is your head and you are just a “mess on a napkin' discarded on the crappy streets of Bristol. Another murder supporting Democrat butcher TWAT who must RESIGN NOW! @GovernorTomWolf

I grieve the loss of my SIX beautiful babies everyday. I am thirty and have had many struggles in my life including Cancer. The loss of my children has been the hardest thing to overcome. Your words have hurt a community of women that fight everyday just to live on. #iam1in4

A hollow apology. I was disgusted by what you said. My twin was miscarried. He or she was not just a mess on a napkin, but a human being at a very early stage of development. A human being I will never know this side of heaven. Your words just revealed what is in your heart.

Your words were chosen to not conflict with a stance that abortion is just so ok because it isn’t a human, really. Problems always arise from trying to keep a lie going.

Many of the responses came from women who’ve suffered miscarriage and others who have been affected by miscarriage.

The bill, HB 1890, cleared the Health Committee 15-10, with every Democrat member voting against it. In May, the U.S. Supreme Court upheld a similar provision of Indiana’s law. Motivated by horror stories about abortion facilities destroying the babies they kill with methods such as “big ovens,” such bills are meant to prevent the bodies of aborted children from being treated like medical waste, both out of respect for their dignity and to underscore their humanity.