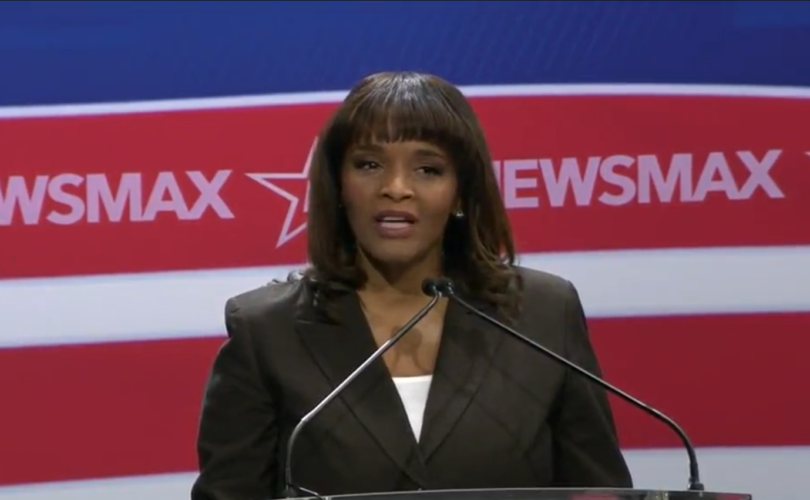 (LifeSiteNews) – Pennsylvania Senate candidate Kathy Barnette condemned competing candidate Dr. Mehmet Oz for switching his position on abortion and revealed that she is “the by-product of rape.”

Pennsylvania Senate GOP primary debate. Kathy Barnette: “I am the product of rape and I am here to tell people like Dr Oz that I am not a clump of cells, my life matters.”

During this debate, Pennsylvania Senate candidate Kathy Barnette challenged frontrunner Dr. Oz, who supports abortions in cases of rape, incest, and for the “health” of the mother, on his position regarding abortion, while revealing that she is a child of rape.

RELATED: Pro-life woman conceived in rape explains why she’s running for US Senate

“I am so very grateful that our nation is now having a very important conversation,” she said. “I am the by-product of a rape. My mother was 11 years old when I was conceived, my father was twenty-one.”

“I was not just a lump of cells, as you can see I’m still not just a lump of cells–my life has value, and that was one of the reasons why it was very disturbing when I saw Mehmet Oz running for this particular race, when I’ve seen him on numerous occasions and specifically at the Breakfast Club, saying that my life was nothing more than an acorn with electrical currents,” Barnette continued.

This was in response to an interview with the Breakfast Club in 2019, in which Oz denounced pro-life heartbeat laws and said, “If you’re going to define life by a beating heart, then make it a beating heart, not little electrical exchanges in the cell that no one would hear or think about as a heart.”

He then slammed pro-lifers for “envisioning a little acorn heart beating in there, and that’s not what’s going on at six weeks.”

In response, Oz claimed that his mother-in-law, a member of the Swedenborgian cult, is a pro-life pastor and she “certainty understands that I’m pro-life.”

“I was a heart surgeon, I operated on small children, a few days old, and witnessed the majesty of their hearts pounding blood even though it’s ill. I would never think of harming that child, or even nine months earlier, because life starts at conception,” he responded, despite his full-throated endorsement of abortion less than three years ago.

During his interview with the Breakfast Club, Oz claimed that life did not necessarily begin at conception since “the heart’s not beating.”

He further stated that, while he would not want any of his own children to have abortions, he did not “want to interfere with everyone else’s stuff.”

Despite claiming to be pro-life, earlier this year in January, Oz dodged a question regarding the morality of abortion in the cases of rape or incest.

The recent leakage of the draft report from the U.S. Supreme Court has caused an influx of politicians publicly voicing their opinion either for or against life. Furthermore, polls have showed that Americans are overwhelming pro-life.