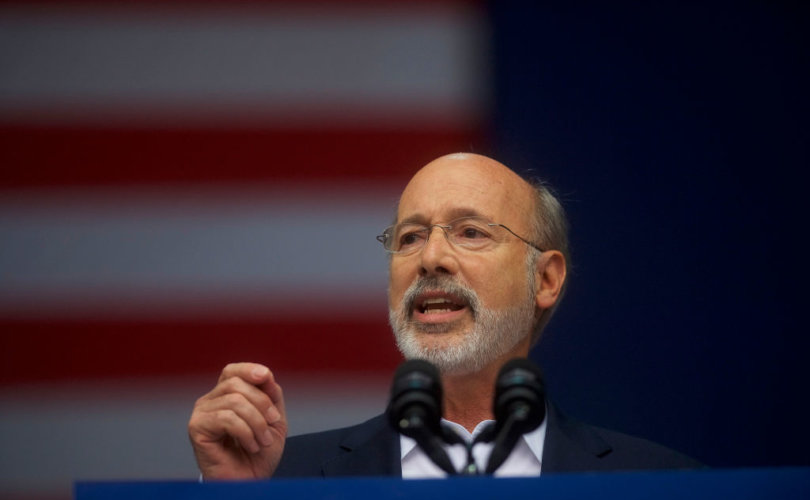 HARRISBURG, Pennsylvania (LifeSiteNews) – The Pennsylvania Supreme Court denied a request from pro-abortion Democrat Gov. Tom Wolf to stop Senate Bill 106, which would introduce several proposed amendments to the state constitution, including one that says there is no constitutional right to abortion or guarantee for taxpayer-funded abortion.

In an order delivered Monday, the court stated that it rejected Wolf’s request to exercise its King’s Bench power, or a power that asserts the court could hear a case notwithstanding any dispute in a lower court.

The Supreme Court implied in its order that Wolf could challenge the bill in a Commonwealth Court, which normally is the first to hear challenges to legislation, The Epoch Times reported. The court did not give a reason for its refusal to grant Wolf’s request.

Senate Bill 106, introduced in January 2021, proposes several amendments to the Pennsylvania constitution that would appear as referenda on Pennsylvania ballots, including the one on abortion.

The other proposed amendments state that candidates for governor would be able to choose running mates, that any regulations from the governor could be rejected by the state legislature regardless of the governor’s veto, that the state auditor general has the power to audit elections, and that voters would have to provide state IDs to vote at polling places or provide proof with the ballot if it is not submitted in person.

According to the Pennsylvania constitution, the amendments face another approval vote from the state legislature in the next session, which begins in January. If passed, the proposed amendments could appear on ballots as five different referenda as early as May 16, when Pennsylvanians will vote in primary elections. The amendments do not need Wolf’s signature to become law.

In June, the U.S. Supreme Court overturned Roe v. Wade, which imposed abortion nationwide. Since the ruling, several states have introduced trigger laws that severely limit or ban abortion, though some are currently facing legal challenges.

Wolf is not running for reelection this year as he is in his final term of office under the Pennsylvania constitution. State Senator Doug Mastriano, the Republican candidate for governor who has defended the right to life in the past, has said he would sign a proposed heartbeat bill. He has also stated that he is in favor of a total ban of abortion from the moment of conception without the possibility of exception.

Pennsylvania Attorney General Josh Shapiro, the Democratic candidate for governor, has attended pro-abortion rallies during the campaign and said he would fight to keep abortion legal in the state.