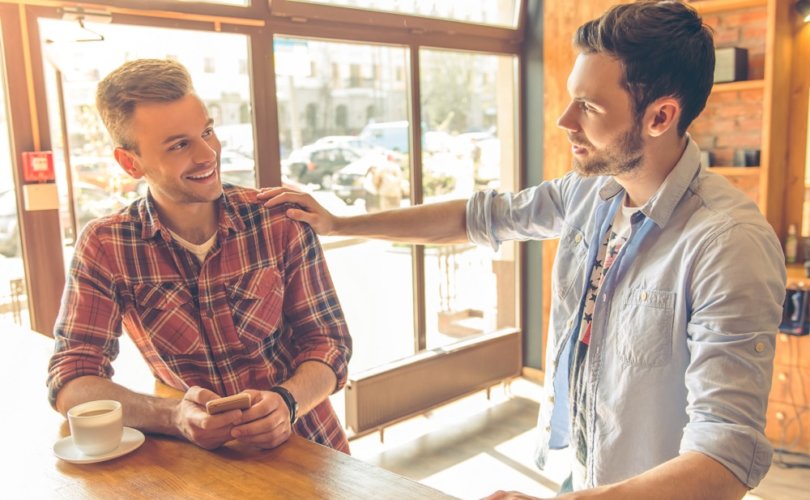 The Men’s Therapeutic Cuddle Group is meant to “provide a safe, structured, and platonic environment for men to experience” the “three As” of “Acceptance, Affirmation and Affection,” according to its Meetup page. “Men may want to cuddle for many reasons, including to help heal past sexual abuse.” The page adds that all cuddling is strictly non-sexual, never occurs on a bed, and is governed by “safe touch” boundaries.

After introductions and explanations of the rules, sessions consist of 45 minutes of one-on-one cuddling (with men changing partners in 15-minute intervals), then an hour of group cuddling “puppy pile” style. The page claims that cuddling can be a source of affirmation in the vein of “a loving father, a brother, or the jock who may not have affirmed them in high school” but stresses that it’s not a substitute for “professional care by a certified counselor, psychologist or psychiatrist.”

“These types of groups can be healthy and helpful for men and women,” Liang said. “If this is something that’s more comfortable for men [than therapy], then it can do a whole lot of good.” The Inquirer paraphrases Liang as hoping such groups “can help men move beyond one restrictive definition of masculinity.”

Campus Reform notes that Liang was also a recent board member of the American Psychological Association (APA), and helped write its guidelines on “Psychological Practice  with Boys and Men.”

“Socialization for conforming to traditional masculinity ideology has been shown to limit males’ psychological development, constrain their behavior, result in gender role strain and gender role conflict, and negatively influence mental health and physical health,” the guidelines claim. “Indeed, boys and men are overrepresented in a variety of psychological and social problems” such as learning difficulties, childhood behavioral problems, and violent crime.

“Traditional masculinity — marked by stoicism, competitiveness, dominance and aggression — is, on the whole, harmful,” the APA claimed in a news release about the guidelines. “Today, transgender issues are at the forefront of the cultural conversation, and there is increased awareness of the diversity of gender identity.”

“As a man who has dealt with same-sex attraction my entire life and has had plenty of familiarity with the LGBT world, I see the APA’s guidelines for what they are: An attempt to diabolically undermine not only manhood, but family, marriage, and natural law,” LifeSiteNews’s Doug Mainwaring said of the new guidelines in January. “It’s almost as if the APA wants to convince boys and men to be uncomfortable with themselves, causing them to question day-in and day-out their every thought, impulse, and action, the very nature of who they are.”

That said, conservative columnist Dennis Prager did see one silver lining to the APA staking out a hard-line stance against traditional masculinity: it helps people seeking psychological help know which therapists not to trust.

“If the therapist agrees [with the APA’s declaration], thank him or her for the time and leave,” Prager wrote. “If the therapist starts giving a prolonged response, leave. Any therapist who cannot unequivocally condemn the APA statement is unworthy of your time and your money, let alone your psyche.”