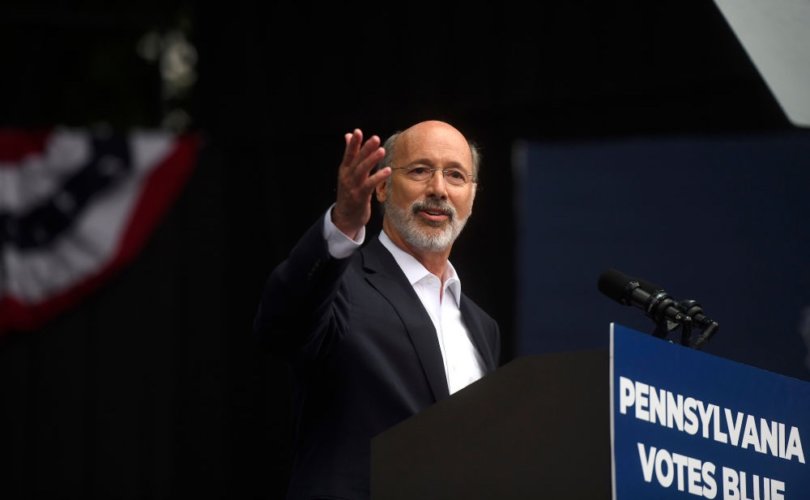 (LifeSiteNews) – LGBT “pride” activists recently taught young children how to pole-dance at an event championed by Democrat Gov. Tom Wolf and funded by his administration, according to viral video and the governor’s public statements.

On August 4, the popular watchdog Twitter account Libs of TikTok shared a video it says is from the Pride Festival of Central Pennsylvania, which depicts a shirtless man teaching a cross-dressing boy how to climb and spin on a stripper pole, to the amusement and approval of the crowd:

A pride event in PA featured a stripper pole where they taught kids how to pole dance pic.twitter.com/IRBE07lp3q

On its website, the event’s board proudly displays a July 30 proclamation from the pro-abortion, pro-LGBT Wolf celebrating its 30th anniversary, praising the festival for “challenging oppressive norms” and “uniting the community in hope and solidarity.”

Breitbart further noted that on July 13 the Wolf administration announced a $10,000 grant for the Festival, which was one of 17 grants totaling $90,000 for similar groups from the state’s PA Pride Community Grant Program, “which supports Pride festivals and events throughout the commonwealth through September 2022.”

“The PA Pride Community Grant Program reaffirms our commitment to bringing visibility to the LGBTQ+ community and creating a more inclusive commonwealth,” said Carrie Fischer Lepore, deputy secretary for marketing, tourism and film with the Department of Community and Economic Development (DCED). “Uplifting events and festivals that celebrate belonging, accessibility and inclusion sends the message that in Pennsylvania, all are welcome to pursue their happiness.”

State promotion of gender-fluidity and sexual or sex-adjacent activity to minors has been an ongoing problem, prompting legal action to curb it from states like Florida and Virginia. Democrats and their allies claim it helps children to affirm their perceived “gender identity,” but evidence suggests the opposite.

A range of scientific literature indicates that while reinforcing gender confusion may give a patient short-term satisfaction, over the long term it often fails to prevent, or actually exacerbates, significant emotional harm up to and including attempted suicide (with or without surgery), because fixating on “gender affirmation” tends to distract from exploring other issues that may be the actual root of a patient’s mental or emotional unrest, and from the fact that “transitioning” frequently comes with psychological side effects.

On top of those issues, experts outside the medical establishment warn that surgically or chemically reinforcing gender confusion imposes irreversible harm on children such as infertility, impairment of adult sexual function, and reduced life expectancy, as well as the psychological toll of being “locked into” physical alterations regardless of whether they change their minds when they mature. Studies indicate that more than 80 percent of children experiencing gender dysphoria outgrow it on their own by late adolescence, unless their confusion is reinforced by adults.

In March, a forum hosted by the group Genspect gave voice to firsthand accounts affirming the above from worldwide “detransitioners,” people who ultimately returned to living as their true sex, who also spoke about the biases, blind spots, and negligence on these points from the medical establishment.