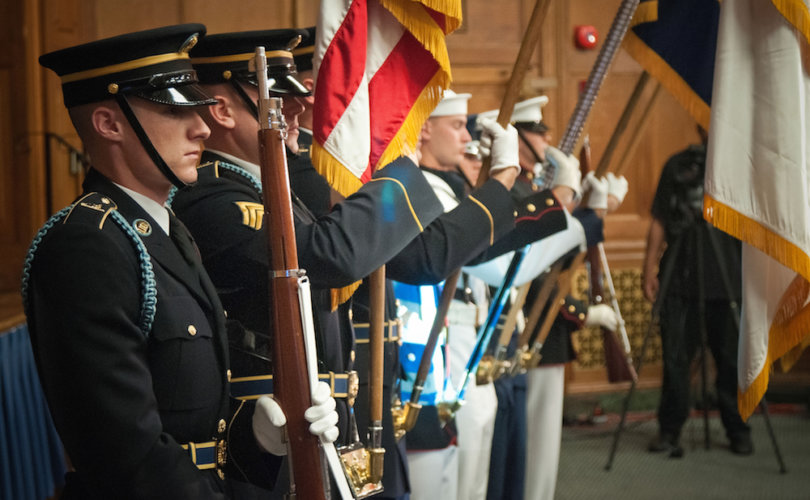 WASHINGTON, D.C., June 13, 2018 (LifeSiteNews) – For the first time since former President Barack Obama repealed the military’s “Don’t Ask, Don’t Tell” policy during the early years of his presidency, Pentagon officials have chosen not to honor LGBT ‘Pride Month’ with a formal acknowledgment.

In years past, the Department of Defense distributed a memo marking LGBT Pride Month at the beginning of each June.  The Washington Post notes that the annual memo had “put LGBT Pride Month on par with other special observances and heritage months.”

The absence of such a memo, while not an official renunciation of the LGBT celebration, lessens its stature.

LGBT Pentagon employees were free to hold an event earlier this week, though no high-ranking officials participated.

Some service members and Defense Department civilian employees who are troubled by President Trump’s attempt to ban transgenders from military service reportedly perceive this as a bad omen.

Last summer, President Trump tweeted, “After consultation with my Generals and military experts, please be advised that the United States Government will not accept or allow Transgender individuals to serve in any capacity in the US Military.”

The President added, “Our military must be focused on decisive and overwhelming victory and cannot be burdened with the tremendous medical costs and disruption that transgender in the military would entail. Thank you.”

At the time, a group of retired military top brass offered wholehearted support to the President’s guidance, calling it “courageous.”

A July 27, 2017 letter defending the transgender ban — signed by three lieutenant generals, seven major generals, three brigadier generals, an admiral, a vice admiral and a Marine Corps veteran (all retired) — states, “There may be an enormous amount of vitriol directed at you for making this policy correction, but please know that overturning this policy may have done more in the long term to save the culture and war-fighting capacity of the U.S. military than perhaps any other military policy you will adopt as president.”

The President’s orders were met with stiff opposition within and outside the government bureaucracy. Individuals and groups quickly filed lawsuits in federal courts aiming to overturn Trump’s suspension of Obama-era guidelines welcoming transgenders into the military. In each case, judges have ruled against the administration’s effort to temporarily keep gender-confused individuals from the ranks of the military.

The Trump White House has drawn criticism in recent weeks for failing to salute the rainbow flag as former President Obama did.

While on the campaign trail, candidate Trump presented a friendly attitude toward the LGBT ‘community,’ saying he would do everything he could “to protect our LGBTQ citizens from the violence and oppression of the hateful, foreign ideology, believe me.”

After 500 days in office, his words and intent have become clearer.  President Trump fights for the rights that all human beings share in common, while declining to promote the agenda items of LGBT activists and their progressive allies.

During the first year of his Administration, President Trump overturned an Obama-era order that required businesses doing contract work for the government to prove they were complying with federal rules regarding hiring, firing, and promotions of LGBT employees.

The Trump administration has sought to overturn a policy change by the Obama administration that allowed transgender individuals to serve openly in the military.

More recently, the Trump Administration’s Education Department told a news agency that it will no longer investigate or take action on complaints filed by transgender students who say they are being discriminated against by being told to use bathrooms corresponding to their biological gender.

Perhaps most tellingly, the Administration has also raised the ire of LGBT activists by its consistent nomination and placement of federal court judges they deem hostile to their agenda.

1
It’s beginning to look like the establishment will throw Zelensky under the bus to save face
2
How the US gov’t built a shadow structure that enabled COVID vax ‘bioterrorism’
3
Abp. Viganò: Our Lady’s humility is an intolerable affront to the ‘pride and disobedience’ of Satan
4
Ireland sees 42% more deaths in past two months compared to pre-COVID levels
5
‘Never Again’ documentary takes deep dive comparing COVID propaganda with Nazi Germany
Subscribe to Daily Headlines »