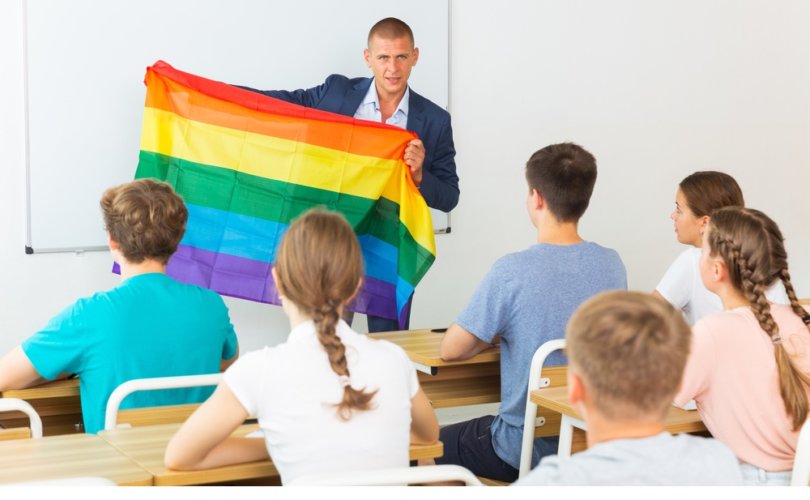 The conservative Claremont Institute investigated the curriculum and teaching methods used in the Department of Defense Education Activity (DODEA), the U.S. government program responsible for the education of children in military families from kindergarten through high school.

The investigation focused on the material presented during a 2021 “Equity and Access” summit designed to “guide common curriculum and practices for the military education system.” Ryan P. Williams, president of the Claremont Institute, and Scott Yenor, a fellow at the think tank’s Center for the American Way of Life, pulled examples from the summit to show the expectations put on teachers to force far-left ideologies onto their students.

In a talk titled “Ally 101: Creating an Inclusive Classroom for LGBTQ+ Students,” teachers Genevieve Chavez and Lindsey Bagnaschi claimed that there is no reason to hesitate when deciding whether to teach radical gender theory to young children.

“You can talk about LGBTQ+ things in elementary school,” Chavez said in the talk. “It’s actually the ideal time. Kids as young as 4 years old are already starting to develop a stable understanding of their gender identity. So elementary school is the perfect time because you can really show students the diversity of gender expression and gender activity.”

Chavez and Bagnaschi shared a recommended activity called “Genderbread Person,” which “teaches participants [children] how to identify themselves on four continuums of gender, gender expression, biological sex, and sexual orientation.”

Another suggestion for indoctrinating young children is to begin the first day of school “by asking students their name and what they would like to be called,” as well as asking whether the child would like to use an alternative name or pronoun while their parents are in earshot.

“It is not simply that teachers think themselves more qualified than parents,” the report states. “It is that teachers know parents would object to sowing gender confusion among their children.”

— Article continues below Petition —
Stand with Christian daycare worker fired for refusing to indoctrinate kids with LGBT agenda
Show Petition Text
7964 have signed the petition.
Let's get to 9000!
Thank you for signing this petition!
Add your signature:
Show Petition Text

Bagnaschi encouraged teachers to “say their pronouns whenever possible to ‘normalize’ conversations about gender.” Should educators forget this habit, Chavez “recommends that teachers form little groups where they can practice student pronouns with one another, or they can ask the students to help police their language.” An example of using “gender neutral language” is calling the children “seventh graders” instead of “guys.”

“They want students to puzzle over their own identity and even to create confusion where there once was certainty,” Williams and Yenor wrote. “Concern over gender confusion prevents students from ever discovering the wonder at the root of real education. Teachers want to see more children who are confused about their identity because only this confusion, in their view, is authentic. And then students are supposed to be fixated on that confused identity.”

The investigators also point out that the push of these ideologies breeds a generation of activists who are “hyper-aware of misgenderings” and “seek ways to make their environment less defined by the gender binary.”

In addition to promoting radical gender ideology, the DODEA also pushes critical race theory on students. One teacher named Tracy Shelton “recommends book studies as essential to learning the basics of antiracism and ‘ways to change’ institutions and themselves.”

Shelton said that “framing people as either ‘racists’ or ‘antiracists’…should guide student evaluation of the world and should be incorporated into class teaching.” She also says that although teachers “don’t have a lot of control over the texts that are chosen” in curricula, they “do have some influence” regarding which books to “read-aloud” and provide for “independent reading, book clubs, [and] literature circles.”

“We still have a lot of room for getting the right book in their hands when they need it.”

Another teacher expressed concern over “practices like singing the national anthem or saluting the flag,” which he calls “offensive to many identity groups.” The proposed solution is to convince students to “think their own country is fundamentally racist and in need of systematic change.”

“Some lessons betray transformative social and emotional learning (SEL), a technique used to stigmatize old, supposedly oppressive ideas like the nuclear family, meritocracy, and color-blindness, and they replace them with radical notions like those according to which white people are inherently privileged or systemic racism,” the report states.

Ultimately, the investigators declared that “a traditional education model of objective truth and human dignity must be regained. Parents must stand up against an ideology that has gained so much power in schools.”

Although gender ideology and critical race theory have become increasingly prominent in American schools, multiple surveys have shown that vast majorities of the public are opposed to the ideologies themselves or to the practice of teaching them in public schools.