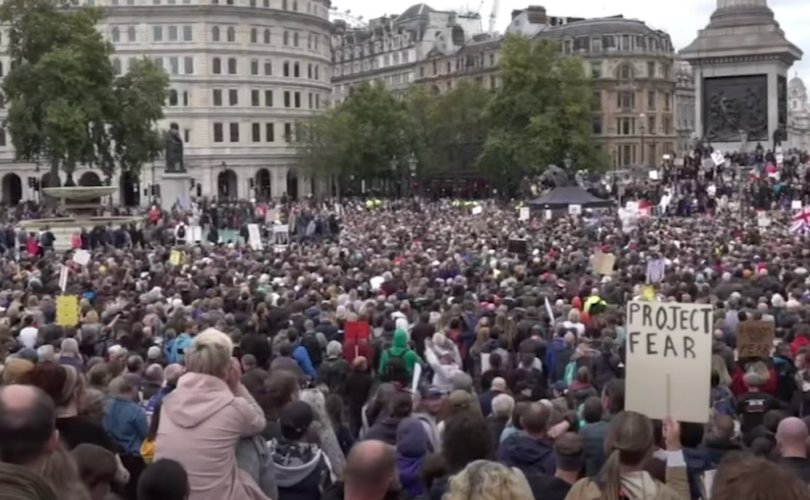 September 4, 2020 (LifeSiteNews) – In recent weeks, people across the globe have protested against the draconian restrictions imposed by governments in the wake of the coronavirus crisis.

These protests have largely been characterized as gatherings of “COVID-deniers” by many liberal media outlets, although it seems the majority of the events have been focused simply on opposing mandatory vaccines, harsh lockdowns, and masking rules.

On August 29, more than 10,000 people gathered in London, England, for a rally. Weather forecaster Piers Corbyn, the brother of former leader of the Labour party Jeremy Corbyn, was among the speakers.

In Berlin, Germany, local authorities had tried to ban a large protest, but were corrected by the courts.

According to police, roughly 38,000 people protested the mask mandates, and the potential for making a COVID-19 vaccine mandatory.

Among the speakers at various individual events in the German capital was Robert F. Kennedy Jr., founder of Children’s Health Defense, an organization dedicated to exposing the dangers associated with many vaccines.

“We want health officials who don’t have financial entanglements with the pharmaceutical industry, who are working for us, and not big pharma,” the nephew of President John F. Kennedy said.

The CBC report quoted Kelly Anne Wolfe, executive director of The Line Canada and involved with organizing the protest, as saying, “If you want to wear a mask or a tutu, we have nothing to say about that. That is your right. You do not have a right to put one on my face or the face of my children. It's as simple as that.”

A smaller crowd of a few hundred people came together in Zurich, Switzerland. The peaceful protest was dissolved by police.

In Dublin, Ireland, hundreds, if not thousands, of people had gathered on August 22, also protesting lockdowns, masks, and vaccines. Dr. Dolores Cahill, an immunologist, was met with frequent applause during her half-hour speech.

In mid-August, the Spanish capital of Madrid was the sight of another large protest.

Here, too, forced face coverings and vaccines were the main issues.

In May, people in Bosnia and Herzegovina, a small country in Southeast Europe, protested “against bad governance, nationalism and corruption as senior government officials face graft accusations related to the procurement of defective ventilators for COVID-19 patients.”

Meanwhile, in the United States, LifeSite’s video reporter Jim Hale was on site to cover the “March Against Mandates” in Richmond, Virginia, on Wednesday.

Kathleen Medaries, Director of Communications and Strategy at Virginia Freedom Keepers, which organized the event, said that Virginia Health Commissioner Norman Oliver has the power to force Virginians to take a COVID-19 vaccine: “under [an] emergency powers law, he is given the right to mandate that every adult and child receive a COVID shot if he deems it appropriate,” she said.

“We have a situation where this unelected official has unilateral authority to make a medical choice for all Virginians, and Virginians are gathered together to say: That’s a problem, we don’t approve.”

Medaries also pointed out the irony that the Virginia government, which in the context of abortion affirmed women who claimed, “my body, my choice” (even though the unborn child is not part of a woman’s body) now says, “it’s your body, and it’s my choice.”