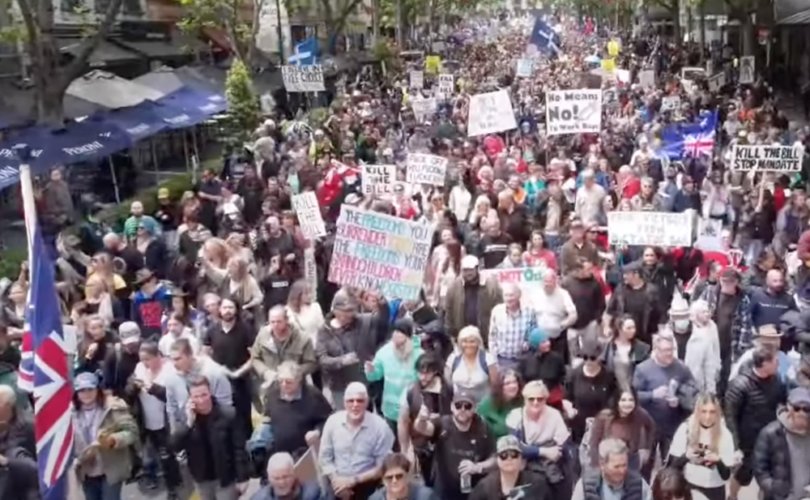 MELBOURNE, Australia (LifeSiteNews) – Tens of thousands of Australians took to the streets this weekend in Melbourne, as the “huge movement” protested against new laws which would allow for the indefinite prolonging of “draconian” COVID-19 powers in the already regularly locked-down state.

Billed as “one of the largest protests in years,” Melbourne residents, numbered in the tens of thousands, demonstrated this past weekend against Premier Dan Andrews’ proposed COVID-19 related laws.

The laws would lead to “an effectively unlimited power to rule the State by decree for an effectively indefinite period, and without effective judicial or parliamentary oversight,” according to Chris Blanden QC, the president of the Victoria Bar.

Due to its unspecified terms and open ended time limits, the Rule of Law Education Centre has warned that the Pandemic Management Bill would grant the Premier and the Health Minister “absolute, unreviewable power to indefinitely keep Victorians in lockdown.”

In response, and after many months of Andrews’ radical restrictions of freedoms throughout the COVID-19 era, protestors flooded the streets, holding placards and chanting “Kill the bill” and “sack Dan Andrews.”

The “huge movement,” was likened to a “runaway train” and commentators described the protest as a pivotal moment in the future of Victoria. The protestors rallied outside Parliament House, where speakers addressed the crowd and “a party atmosphere” spread through the streets.

One of the largest protests in years today in Melbourne against the COVID police state. The people say no more. pic.twitter.com/HgFPsMLpbl

Protesting for “personal freedom, personal movement,” and against “medical apartheid,” some protestors carried the statue of Our Lady of Fatima through the streets of Melbourne.

Protests against #VaccinePassports are a daily occurrence now down under, but of course you want hear about it from any mainstream media outlet.

The MSM lie to you by omission.pic.twitter.com/YijHwQjeyt

“I’m scared for my future, and I’m scared for my parents that they’re going to lose their jobs and then we’ll be homeless, because they don’t want to give in,” said one 14-year-old demonstrator. “I’m scared for when I have kids. What if this is still going on: I’m going to have to fight for my kids too?”

This 14-yr-old has more courage and wisdom than most adults. #melbourneprotest

Another woman who came to Australia from East Timor as a child fleeing “corrupt” governments, told Rebel News she “never imagined…I would experience this” in Australia. “Governments are here to serve and protect us, not to push fear. This bill only serves one person, and that person is Dan Andrews.”

No one said it better than this woman. #MelbourneProtest

Victorian protestors were joined by the leader of the United Australia Party Craig Kelly, who told Rebel News “people are not going to put up with this b*****it anymore. This is the most locked-down city in the world, it’s the most oppressed city in the world. But the science shows there is no cause for this. People are going to stand up for their rights.”

This is what happened when @OzraeliAvi bumped into @CraigKellyMP at the MASSIVE protest in Melbourne on Saturday.

“How could you give someone like Daniel Andrews more power after what he’s done,” questioned Kelly. “He’s a bully. I remember from school how you handle bullies: you don’t appease them. You take them head on.”

The bills were introduced with virtually no notice and would not even require any cases of COVID-19 in the state in order to be enacted, leading Liberal MP Ryan Smith to protest the rushed move. “I have never seen a worse piece of legislation that gives, not the government of the day but the Premier of the day, unprecedented, draconian and dictatorial power” he told Parliament.

Andrews has now “watered down” aspects of the bill, halving some of the financial penalties – which had been $90,000 fines for individuals and $455,000 for businesses who “intentionally and recklessly” violate public health orders – yet two year jail terms are still possible for Australians who breach the orders.

The premier will now need “reasonable grounds” in order to announce a pandemic, and his orders “must be relevant to the public health risk.”

The now-amended bill is expected to pass with the cross-party assistance of pro-lockdown politicians Andy Meddick MP, Reason Party MP Fiona Patten and Greens leader Samantha Ratnam. Debate is predicted to continue until Thursday night, as parliamentarians attempt to pass the legislation.