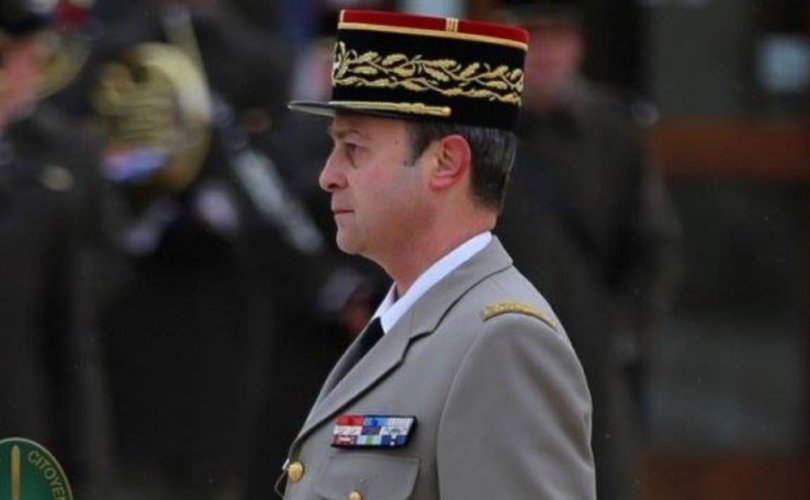 Correction, October 17, 2022 at 1:40 p.m. Eastern time: LifeSiteNews has updated this article to indicate that the text of the tribute letter may have originated with Spanish biologist and film-maker Fernando López-Mirones.

The statement Blanchon published may have originally been written by Spanish biologist and film-maker Fernando López-Mirones, who posted a statement with almost the exact same words in Spanish on his Telegram channel on July 26, 2022.

Blanchon’s publication of the text made waves in Europe and around the world among people critical of draconian COVID policies but was largely ignored by the mainstream press.

The text of the soldier’s letter offers encouragement to those who resisted the experimental COVID jabs that were developed, according to the recent admission of a Pfizer executive, “at the speed of science” and not thoroughly tested before being introduced to the market.

Blanchon praises the courage of the unvaccinated who often faced immense pressure from doctors, colleagues, friends, and even family members.

READ: Dutch MEP to Tucker Carlson: Pfizer’s admission on COVID jab testing ‘one of the biggest scandals of our time’

— Article continues below Petition —
PETITION: Demand the Conservative Party apologize for not resisting Trudeau's COVID regime
Show Petition Text
4396 have signed the petition.
Let's get to 5000!
Thank you for signing this petition!
Add your signature:
Show Petition Text

He said that those who resisted the COVID jabs “embody the best of humanity” and are “superheroes.”

The French military general also alluded to a battle between light and darkness as he described the unvaccinated as “the soldiers that any army of light wishes to have in its ranks” and when he added that they are “heroes born among ordinary men who shine in the dark.”

Blanchon stated that “we now know who the resisters are on planet Earth,” referring to the refusal of the unvaccinated to give in to the immense pressure they faced.

Here is the full statement translated into English:

Even if I were fully vaccinated, I would admire the unvaccinated for standing up to the greatest pressure I have ever seen, including from spouses, parents, children, friends, colleagues, and doctors.

People who have been capable of such personality, courage, and such critical ability undoubtedly embody the best of humanity.

They are found everywhere, in all ages, levels of education, countries, and opinions.

They are of a particular kind; these are the soldiers that any army of light wishes to have in its ranks.

They are the parents that every child wishes to have and the children that every parent dreams of having.

They are beings above the average of their societies; they are the essence of the peoples who have built all cultures and conquered horizons.

They are there, by your side, they seem normal, but they are superheroes.

They did what others could not do; they were the tree that withstood the hurricane of insults, discrimination, and social exclusion.

Excluded from their families’ Christmas tables, they have never seen anything so cruel. They lost their jobs, let their careers sink, and had no more money… but they didn’t care. They suffered immeasurable discrimination, denunciations, betrayals, and humiliation… but they continued.

Never before in humanity has there been such a casting; we now know who the resisters are on planet Earth.

Women, men, old, young, rich, poor, of all races and all religions, the unvaccinated, the chosen ones of the invisible ark, the only ones who managed to resist when everything fell apart. Collapsed.

You’ve passed an unimaginable test that many of the toughest marines, commandos, green berets, astronauts, and geniuses couldn’t pass.

You are made of the stuff of the greatest that ever lived, those heroes born among ordinary men who shine in the dark.