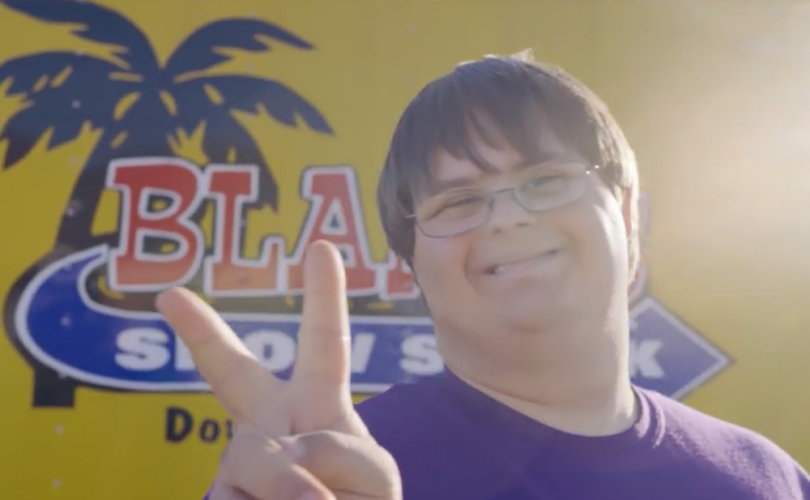 In the video, Mary Ann and Billy Pyron tell the story of learning about their son’s condition, watching him grow, and how he eventually thrived in a way doctors had completely discounted.

“When the doctor came in and said she thought he had it, I said, she is crazy, he is so perfect. They just didn’t give us a lot of hope,” Blake’s mother said. Doctors gave them no better prognosis than that he “might” be able to walk and talk, but she knew God had a greater plan in mind.

Precise data is not collected in the United States, but in 2015, the Charlotte Lozier Institute estimated that abortion reduces the American Down syndrome community by 30 percent. Mary Ann refused an amniocentesis when she was pregnant with Blake because she knew she would never add him to that number for anything.

Without families in similar situations to turn to for advice, they ultimately decided to raise Blake the same way they raised Mitchell, his big brother. As a result, Downs proved to be “such a small part” of Blake’s life that he grew up to be a football captain, prom king, and eventually a small business owner.

After a year in a successful, fulfilling job at a local barbecue restaurant, as a high school senior Blake found his world thrown into uncertainty when the restaurant closed down. That job had been the family’s long-term plan for Blake’s future, so that summer they sat down to devise a new one.

The answer was Blake's Snow Shack, a trailer-based snow cone business that quickly won his community’s affection, as well as international fame, complete with a NASCAR endorsement deal. Ironically, his mother told Live Action that the day the city approved his business permit “was 20 years ago at that exact same time that the hospital was telling us he had Downs,” and that his life would likely be short and futile.

Instead, his company’s website reads, the Snow Shack is “proof that the approximately 6,000 babies born with Down syndrome each year represent 6,000 future entrepreneurs, community leaders, and valuable members of society.” His mother believes this example was God’s purpose for Blake. “I’ve had people tell me that Blake has changed them.”

“People just assume there’s so much he can’t do, but people with Down syndrome can really do anything,” Blake’s brother, Mitchell, said.