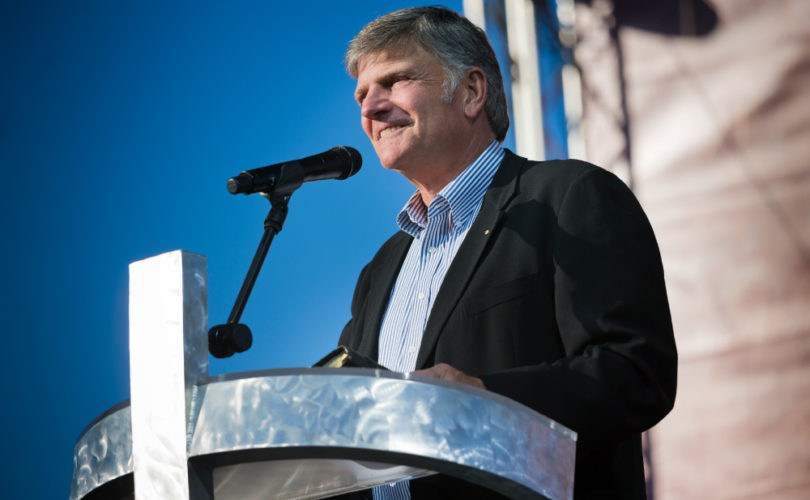 BOONE, NC, April 27, 2015 (LifeSiteNews.com) – First, they were fined $135,000 for refusing to bake a wedding cake for a homosexual “marriage” ceremony. Then, a rival business owner convinced GoFundMe.com to stop Christian bakers Aaron and Melissa Klein from raising money to pay the fine on the grounds that, since their religious beliefs violate state law, they are common criminals.

Now, one of the nation's most well-known Christian ministers and philanthropists is coming to their aid.

An administrative law judge fined the Oregon bakers, proprietors of Sweet Cakes by Melissa, $135,000 to pay for the emotional suffering of Rachel and Laurel Bowman-Cryer – a lesbian couple who say they feel the Kleins “mentally raped” them.

The Kleins have since closed their Portland-area business and lost substantial income. After hearing of the fine on Friday, Melissa said the amount would financially crush them.

The family opened a GoFundMe page and, within hours, they collected more than $109,000.

Then Lisa Watson, the co-owner of Cupcake Jones in Portland, began lobbying the website to banish the couple's appeal.

“The amount of money they have raised in a matter of a few hours by thousands of anonymous cowards is disgusting,” Watson wrote on Facebook. She added that the website's “terms of service address hate speech, bigotry, criminal activity, and sexism among other things in their campaign.”

GoFundMe then suspended the Kleins' fundraising.

“While a different campaign was recently permitted for a pizzeria in Indiana, no laws were violated and the campaign remained live,” GoFundMe said in a statement. “However, the subjects of the 'Support Sweet Cakes By Melissa' campaign have been formally charged by local authorities and found to be in violation of Oregon state law concerning discriminatory acts. Accordingly, the campaign has been disabled.”

The day after the announcement Watson, who operates her business with husband Peter Shanky, posted a photo of her 2015 Equality Advocate Award “for outstanding leadership to advanced lived equality for all LGBTQ Oregonians.”

The Kleins hope the website will reconsider. “We have told GoFundMe that the money is simply going to be used to help our family, and there is no legitimate breach of their terms and conditions,” the Kleins wrote on Facebook.

That's when the Reverend Franklin Graham and his ministry Samaritan's Purse stepped in, allowing those who wish to alleviate the couple's suffering to donate on its website.

“The fund was created to help persecuted Christians in the U.S., including Aaron and Melissa Klein,” an employee at Samaritan's Purse told LifeSiteNews today. “It was only activated over the weekend and the organization has not yet announced any numbers. Currently, Samaritan's Purse is focused on the earthquake in Nepal and providing relief supplies to people impacted by the disaster.”

Graham praised the Kleins' steadfastness in the face of legal challenges. “They have taken a stand for the Word of God, and they should not have to stand alone,” the ministry's founder and president Franklin Graham said. “I believe that Christians across our nation will rally around Aaron and Melissa and their five children. Please pray for Aaron and Melissa, and pray for our nation. When our judges are punishing Christians for practicing what they believe, that’s persecution, plain and simple.”

The Kleins will still receive the money raised by GoFundMe, in addition to any supplemental funds raised by Graham's international charitable ministry.

Conservative author Dan Calabrese wrote that “Melissa's Sweet Cakes will not have to go into bankruptcy and the family won't personally be ruined. And what a disappointment that must be to the gay mafia, whose agenda is to intimidate all gay marriage opponents into not just silence but compliance, for fear of just such” an outcome.

Christians have risen to the challenge before. Memories Pizza raised more than $840,000 after the Indiana pizzeria was harassed into closing its doors for saying it would not cater a same-sex “wedding.”

Calabrese warns that these victories may lead to more intense anti-Christian persecution.

“When put in an untenable position like this, Christians and others who support their right to operate their business as they see fit will come to their aid. So the gay mafia will take it up a notch, attempting to intimidate the fundraising organizations from cooperating with the effort,” he said.

If that fails, “Maybe they can persuade friendly Democrat lawmakers (or terrified Republicans) to legislate them out of business.”

Readers can donate to the Klein family here.