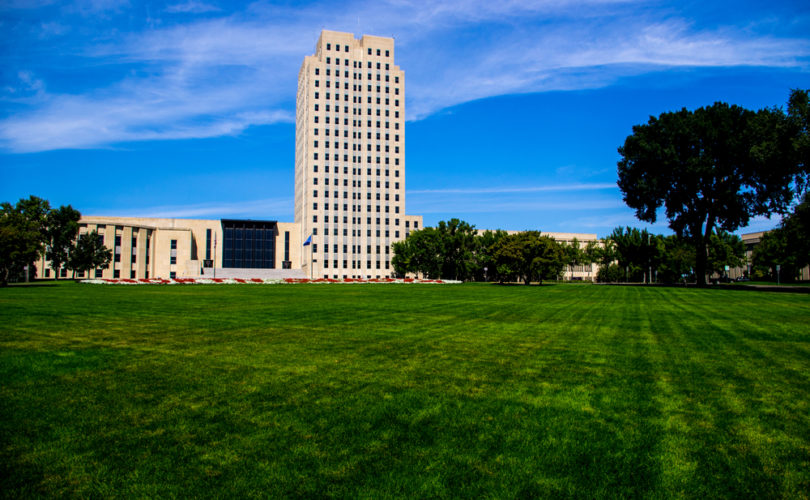 As Democratic candidates enter their second election cycle accusing the Republicans of waging a “war on women,” the majority of one state seems poised to adopt a measure many are calling a personhood amendment.

North Dakota's Measure 1 would amend the state constitution to affirm, “The inalienable right to every human being at any stage of development must be recognized and protected.” While New York Governor Andrew Cuomo's abortion expansion program received mass media coverage, and reporters have tried to put Republicans on the defensive about “personhood,” Measure 1 has gained little mention outside the activist press. Robin Marty at Cosmopolitan calls it “The Abortion Amendment America Forgot.”

Yet North Dakotans seem poised to turn the amendment into law. Recent polls show as much as 50 percent of the electorate favoring the measure, with its strongest support among young people.

Many of the measure's supporters strongly deny it is a “personhood” amendment, although several of its supporters have also described it with that term. Supporters with ND Choose Life note that, unlike other personhood measures, it does not define when life begins.

They add that, since it is not a self-executing amendment, Measure 1 does not require any specific action on its own. “It doesn’t provide a particular policy prescription regarding abortion or anything else,” said Eric Scheidler, executive director of the Pro-Life Action League. “It would be up to the legislature to do something.”

If it becomes law, it may have a second effect. North Dakota Sen. Margaret Sitte, who sponsored the resolution, said she intended the measure as “a direct challenge to Roe v. Wade, since [Justice Antonin] Scalia said that the Supreme Court is waiting for states to raise a case.”

ND Choose Life has raised $577,895, with its only significant out-of-state donation being a $9,300 check from Georgia Right to Life Educational Trust Fund. The remaining five donations from out-of-state total less than $3,000.

Despite being badly outspent, Measure 1 supporters appear to have the upper hand. A recent poll conducted by the University of North Dakota College of Business and Public Administration, found that 50 percent of voters planned to support the measure, while only 33 percent opposed it. Some 17 percent were undecided.

They also found that people aged 18-30 were the most likely to support it, with 62 percent of that demographic supporting the so-called personhood measure.

Majorities of both Democrats and Libertarians strongly oppose it, and the Libertarian Party has formally urged voters to reject it. Registered independents slightly favored the law, 48-40.

Those numbers worry the pro-abortion movement.

In an interview with Cosmopolitan magazine, she also proposed a domino theory of Personhood: “If one state falls, women's reproductive rights across this entire country are at risk.”

Elizabeth Nash, the senior state issues associate at the Guttmacher Institute, formerly an affiliate of Planned Parenthood, told Mother Jones, “It would be a real blow to women's rights and psychological blow to reproductive health advocates – the idea that we would lose one of these personhood fights.”

Conversely, Personhood USA spokeswoman Jennifer Mason told Politico that winning today's election would be “a great boost to the pro-life movement,” with momentum carrying over into other states.

Opponents warn that the measure would outlaw abortion, ban some forms of contraception, and disallow some end-of-life care and in vitro fertilization reproductive technologies.

Dr. Steffen Christensen, who founded an IVF clinic in Fargo 20 years ago, plans to close his doors if the measure passes, fearing that “sooner or later, someone would try to make an example of us.”

ND Choose Life says Measure 1 would not affect IVF, because it is not a self-executing amendment and because the state's IVF physicians have testified that they do not create embryos with the intent to destroy them, instead leaving them frozen.

The group also says that the IVF argument is a smokescreen for Planned Parenthood's radical abortion expansionist agenda.

“Planned Parenthood, the nation’s largest abortion provider, does not care one whit about North Dakota values or issues like end-of-life care or IVF. They care about abortion, and the more of them the better,” ND Choose Life said in a statement.

State Republican officials say the measure has driven voters to the the polls. “Enthusiasm is high,” GOP Executive Director Jason Flohrs said. “North Dakota is pro-life, and I expect voters to come out to make sure it stays that way.”