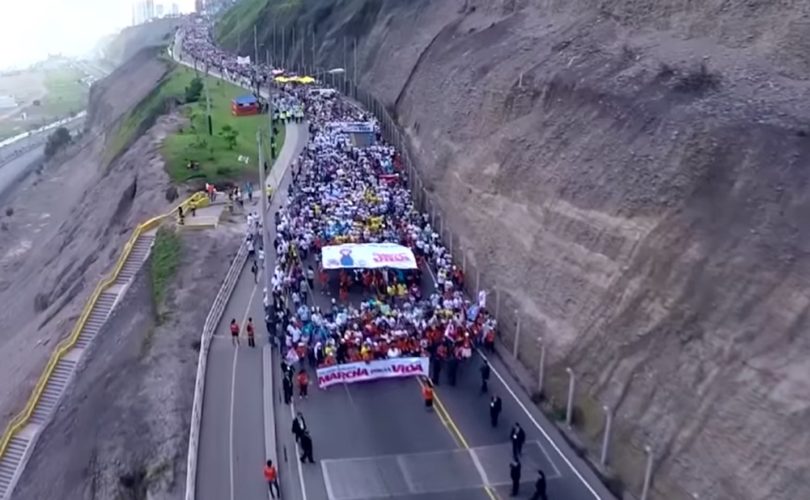 March 14, 2016 (LifeSiteNews) – For the fourth year in a row, Peruvian pro-lifers took to the streets of Lima to defend the right to life of all persons from conception to natural death.

Organizers estimate that over 750,000 people participated in the annual March for Life on Saturday.

Cardinal Juan Luis Cipriano, the archbishop of Lima, who has taken a visible and active role in the defense of life in Peru, stated that “this march has brought together the greatest number of citizens ever in Peru's history, all of them united by one idea and one mission, to defend the paramount right to life.”

Cardinal Cipriani addressed the multitudinous gathering telling them that “I feel very proud to be with you at this march. Peru is showing Latin America and Europe that we can change our way of thinking. We must support life, the family, and we must have the courage to take to the streets. They will not silence us. We will always take to the streets to defend life.”

The march began at 3 pm with an address by the auxiliary bishop of Lima, Msgr. Adriano Tomasi, and proceeded through several neighborhoods of Lima before ending at a beach on the Costa Verde (the green coast). Pro-lifers were then treated to a concert and several talks, among them one by Lianna Rebolledo, a rape survivor who became pregnant by rape and, although only 12 years old, refused to abort.

Also attending the March were several presidential and vice presidential candidates, such as Hernando Guerra, Lourdes Flores, and Ántero Flores-Araoz, who gave statements of support for the right to life and those who defend it.

Peru, along with other Latin American nations that defend the right to life from conception, have been under an unremitting assault from international abortion activists, who have found allies in some of the political elites of leftists political parties.

Although legislation has been defeated repeatedly in the Peruvian congress, last year the current first lady, Nadine Heredia, along with a cadre of handpicked abortion activists appointed to head up the health ministry, were able to issue national health regulations intended to “standardize abortion care” in cases where the health of the mother was in danger. In so doing, they sought to circumvent the clear protections against abortion in the criminal code and in Article 1 of the Peruvian constitution, which states that “the defense of the human person and the respect for his or her dignity is the paramount purpose for society and the state.”

The march is an especially important show of force in light of the upcoming presidential elections, which will be held in less than a month on the tenth of April.

Keiko Fujimori, the daughter of ex-president Alberto Fujimori, is leading the field with 32% of support in the latest polls, followed by Pedro Kuczynski with 14%.

The Ivy League-educated Keiko Fujimori has stated that she is pro-life and in a recent talk at Harvard University stated that the only circumstance that she would favor an abortion is to save the life of the mother.

Meanwhile, Pedro Kuczynski has publicly stated his opposition to abortion in general terms, but when the law, which would have legalized the killing of children conceived in rape, came to congress last year, he stated his support for abortion in such cases.

A recent poll found that 89% of Peruvians reject abortion.

Abortion groups ‘save face’ in Peru