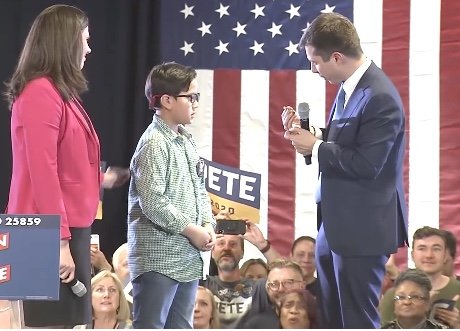 AURORA, Colorado, February 24, 2020 (LifeSiteNews) –– At a campaign rally Saturday, openly gay presidential candidate Pete Buttigieg invited onto the stage a 9-year-old boy in order to publicly offer him advice on “coming out” as gay.

Zachary Ro had submitted a question to the candidate: “Thank you for being so brave.  Would you help me tell the world that I’m gay too?”

As Zachary mounted the stage, the crowd loudly chanted, “Love is love,” a favorite mantra employed by the promoters of same-sex “marriage” leading up to the Supreme Court’s Obergefell decision instituting genderless, non-conjugal marriage across all 50 U.S. states.

Once the boy made it to the platform, Buttigieg did all the talking.

In the end, the candidate tried to make political hay out of the moment: “When I was trying to figure out who I was, I was afraid that who I was might mean that I could never make a difference. And what wound up happening instead, (being gay) a huge part of the difference I get to make.”

“Even if I can’t promise it will always be easy, I can promise you that I’m going to be rooting for you.”

“And I think there’s a whole bunch of people here every step of the way.”

Buttigieg’s “husband,” Chasten, dashed up to the stage to hand the boy something before whisking him off.

A Huffington Post headline declared “Pete Buttigieg helps 9-year-old to come out to the world in emotional exchange,” and Washington D.C.’s The Hill called it “A powerful moment.”

Other observers were troubled by Buttigieg’s exploitation of the boy. Many asserted the boy is too young to make such a declaration, and that Buttigieg and his campaign staff should’ve known better than to hold such a discussion in public.

“As a mom of a 9 year old boy I really question whether this was appropriate,” wrote Twitter user Kim. “A young child deserves privacy and time to grow into their sexual identity. We should understand that, even if children and campaign staff do not.”

Zachary is a sweetie and Pete handled this well, but as a mom of a 9 year old boy I really question whether this was appropriate. A young child deserves privacy and time to grow into their sexual identity. We should understand that, even if children and campaign staff do not.

“It sounds very much like it was his idea but I think if my son had the same idea I would tell him no, that he was too young to talk to strangers about his sexual orientation in front of news cameras,” she added.

9 year olds don’t know anything about sex. They haven’t gone through puberty. They don’t understand their own feelings. They don’t know who they are yet. Leftists who exploit this confusion for political gain are the scum of the Earth. Truly detestable. Infuriates me. https://t.co/0Vgj26cFiU

Roping children in to LGBT ideology

“It is despicable how the parent and Buttigieg used a 9-year-old to create a fait accompli when there is considerable fluidity of sexual desires at this age,” said Professor Robert A. J. Gagnon in a Facebook posting.

Gagnon, a professor of Theology at Houston Baptist University, suggested that if Buttigieg is elected to the White House, the country can expect an intensification of such messaging to boys and young men.

“Expect this to be a regular part of a Buttigieg presidency,” continued Gagnon. “White House photo ops, State of the Unions, speeches around the country, executive orders, legislative agendas, television appearances, media stories. 24/7, all ‘gay,’ all ‘transgender,’ roping in children to a scripted ideology, demonizing parents who disagree, working for legislation to take children out of the homes of ‘bigoted’ parents, forcibly indoctrinating all children in the schools to think that anyone who disagrees (including parents) is hateful and ignorant, encouraging ‘experimentation’ on the part of children, mandatory ‘LGBTQ’ clubs, mandatory teacher reeducation instruction, denying Christian schools of any federal aid or student loans (ultimately accreditation), ad nauseam.”

It was a shameful exploitation of a child who should be innocent of adult sexual behaviors. I felt sad.

He is only 9-years old and doesn’t know who he is yet. Who the hell do you think you are playing with the mind of a child? @mayorpete_2020 https://t.co/1cXlPVNcZW
#MayorPete

It takes a truly psychologically disturbed “man” to try and publicly exploit a 9 year old boy for political office. What a bastard.