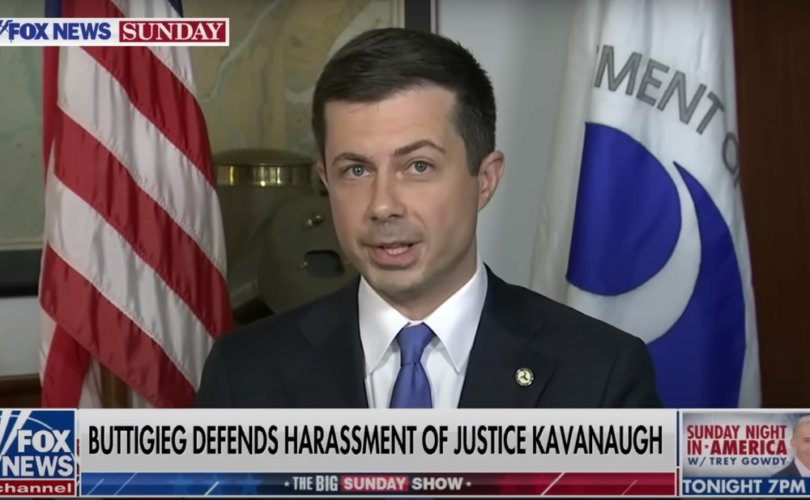 (LifeSiteNews) — U.S. Transportation Secretary Pete Buttigieg on Sunday refused to condemn the harassment of Supreme Court Justice Brett Kavanaugh at a D.C. restaurant last week, backing up a mocking comment made by his homosexual “husband.”

On Wednesday, Justice Kavanaugh was reportedly forced to escape out the back door of a Morton’s restaurant in Washington, D.C. due to harassment from pro-abortion protesters, LifeSiteNews reported. The incident came just weeks after Kavanaugh was the subject of an attempted assassination.

Kavanaugh was one of five Supreme Court justices who voted to overturn Roe v. Wade in the crucial Dobbs v. Jackson Women’s Health Organization case late last month, generating the ire of pro-abortion activists who insist that killing an unborn baby should still be regarded as a fundamental right.

On social media, the disruption of Kavanaugh’s dinner last week was met with mockery from leftist commentators, who argued the justice had no right to eat at a public restaurant without facing harassment.

“Sounds like he just wanted some privacy to make his own dining decisions,” joked Chasten Buttigieg, the homosexual “husband” of Transportation Secretary Pete Buttigieg, in a July 8 tweet.

The Transportation Secretary’s “partner” was blasted for appearing to endorse harassment of a Supreme Court Justice, with former Trump adviser Stephen Miller slamming the comment as “wildly irresponsible.”

During an interview on Fox News Sunday, Pete Buttigieg responded to questions regarding Chasten’s remark.

While denouncing violence and intimidation, the homosexual Biden official made the case that “peacefully protesting outside in a public space” falls under First Amendment protections.
Conservative commentators, including Fox News’ Dana Perino and The Daily Wire’s Michael Knowles, have pointed out that the First Amendment does not give Americans the right to protest judges in or near their homes or buildings occupied by them.

During the interview, however, Buttigieg also indicated his ideological agreement with the protesters who disrupted Kavanaugh’s dinner, arguing that “these protesters are upset because a right, an important right that the majority of Americans’ support, was taken away.”

Buttigieg’s comments came after far-left group ShutDownDC publicly offered $50 to $200 to anyone reporting a “sighting” of a conservative Supreme Court justice in a public venue.

ShutDownDC posted the bounty on Twitter last Friday. The tweet, directed to Washington, D.C. service workers, reads, “If you see Kavanaugh, Alito, Thomas, Gorsuch, Coney Barrett or Roberts [direct message] us with the details! We’ll venmo you $50 for a confirmed sighting and $200 if they’re still there 30 mins after your message.”