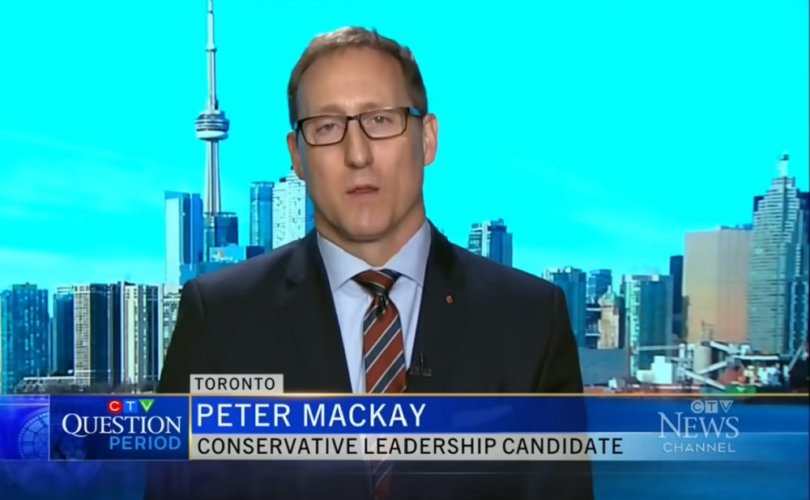 TORONTO, March 6, 2020 (LifeSiteNews) — Pro-lifers should not be fooled by any overtures from Peter MacKay in his run for leadership of the Conservative Party, warns Canada’s national pro-life and pro-family political lobbying group.

“He’s as red Tory as they come, and he’s a pro-abort. He was the first to pander to the LGBT activists by promising to march in the Pride parade, his voting record as MP was brutal and the list goes on.”

An M.P. for Nova Scotia for 18 years, MacKay held several top-level portfolios in Stephen Harper’s government and is one of eight contenders vying to replace Andrew Scheer, whose resignation announcement in December triggered the leadership race.

MacKay infamously opined shortly after the election that the Conservatives lost because the media and the Liberals dogged Scheer with questions about abortion and LGBT issues, which MacKay said no voter wanted to talk about.

“That was thrust on the agenda and [it] hung around Andrew Scheer’s neck like a stinking albatross, quite frankly,” MacKay said in October. “And he wasn’t able to deftly deal with those issues when the opportunities arose.”

On Friday, MacKay sought to distance himself from his “stinking albatross” remark, after Alberta premier Jason Kenney referenced it his endorsement of Ontario M.P. Erin O’Toole.

“I regret the way people have interpreted it, how it was torqued,” MacKay said during a campaign stop in Scheer’s hometown of Regina, reported the Canadian Press.

“But I think as Conservatives if we want to win, we’ve got to be honest with ourselves. We have to address some of the shortcomings that Canadians saw in our campaign the last time, and we have to be a little bit more forward-looking and optimistic, and putting things in the window that people can vote for, not just against.”

In what could be seen as a nod to social conservatives, last month, MacKay tweeted the letter he sent to justice minister David Lametti urging the Liberals to include conscience rights in their euthanasia expansion bill.

The Supreme Court has ruled that doctors have the right to refuse — as he euphemistically put it — “to assist a patient to die,” wrote MacKay.

“Thank you very much, that’s nice of you, but are you going to pull euthanasia back?” he pointed out. “We’re still allowing killing. He’s not going to do anything about that.”

“However, I would never lead a party or a government that would advocate for restricting access or ever bringing back any changes to the law as it pertains to access,” he added.

This could be MacKay “trying to give the perception that he’s got some sort of social conservative sense to him, but he’s doesn’t,” said Gunnarson.

“Without the leader of the party and the cabinet, pro-life legislation will not pass,” he pointed out.

Moreover, “if we’re considered a ‘stinking albatross,’ I don’t have any hopes that he’s not going to interfere with nominations and any attempt to bring forward pro-life policy,” he added.

“If MacKay is elected leader, it would be the fall of the Conservative Party and the conservative movement as we know it. Bad all over, and pro-life? Forget it. We’ll get nothing.”

Of the eight candidates who have met the first deadline and been allowed to run, Campaign Life is backing Leslyn Lewis, Jim Karahalios, and Derek Sloan.

Candidates must submit a further 2,000 signatures and the balance of $300,000 by March 25 to stay in the race, which ends June 27, when the leader will be announced at a party convention in Toronto.

Campaign Life Coalition is urging pro-life advocates to purchase a Conservative Party membership by the April 17 deadline to be eligible to vote in the race.