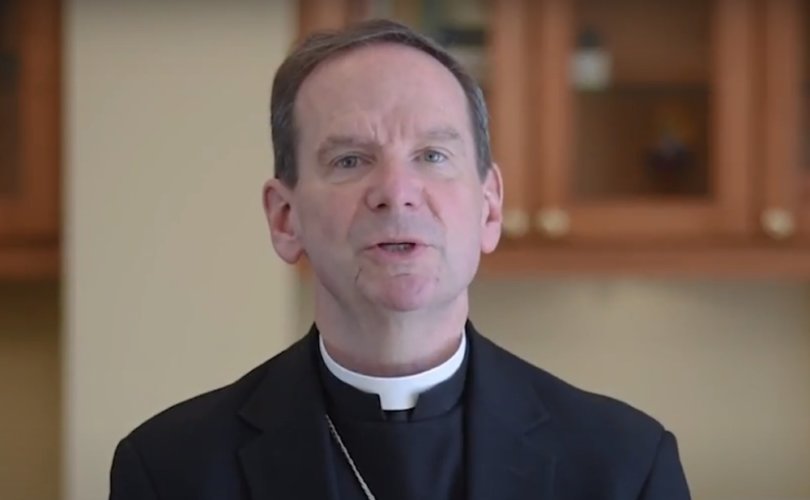 ARLINGTON, Virginia (LifeSiteNews) – Catholics in the Diocese of Arlington petitioned their bishop to reverse his cancellation of the traditional Sacraments as well as his intention to restrict the Latin Mass, which he announced to conform with the instructions of the Vatican’s Responsa Ad Dubia issued in December.

“We have been devastated to learn of restrictions on the celebration of the Traditional Mass and sacraments,” states  the petition, which at the time of publishing has collected over 2,400 signatures.

The petition calls for Bishop Michael Burbidge to “allow the Extraordinary Form and other traditional sacraments to continue across the diocese” and to “engage in consultations with the faithful” of the affected parishes.

On December 21, Bishop Burbidge announced in an email to his priests that “In light of the Responsa,” “no further permissions will be granted” for traditional sacraments, including “the celebrations of Baptisms, Confirmations, Weddings, etc.”

Burbidge also issued this announcement on the Arlington Diocese website, while assuring the faithful that “Mass in the Extraordinary Form may still continue and has not been interrupted in the 21 parishes throughout the Diocese in which it is celebrated.”

However, Burbidge revealed in a podcast recorded on Dec. 20 (#84) that he will restrict the Traditional Latin Mass as well in order to conform with Traditionis Custodes, saying that while the Latin Mass will continue, “it will be limited, more restricted than it is right now.”

According to Traditionis Custodes, the bishop is to set aside “one or more locations” where the Latin Mass is to be held, but not in a parish church, unless it is “not possible” to find such a place, in which case a parish church may be used.

Burbidge’s announcements come as an especially heavy blow to the Diocese of Arlington, because about 30% or more of parishes have a priest who offers the TLM on some sort of regular basis (such as on feast days), more than any other diocese in the United States.

In light of this expected deprivation not only of the traditional sacraments but of the traditional Latin Mass — potentially in many parishes — the petition to Burbidge goes on to express “a profound sense of loss and grief at the prospect of losing the ability to celebrate the Mass and other sacraments in the Old Rite.”

In a challenge to Pope Francis’ stated reason for curtailing the Traditional Latin Mass (TLM) through Traditionis  Custodes, which the Responsa is meant to implement — that TLM attendees “rejec[t] the Church” and cause division — the petition added that TLM “attendees in this diocese” are not marked by a “sense of disunity and schism” but by “deep reverence and love for the Church.”

Rémy-Christophe Mariotti, a traditional Latin Mass devotee in the Diocese of Arlington, explained to LifeSiteNews that the importance of keeping the traditional sacraments is about so much more than just the “bells and whistles,” or the aesthetics of the rites. He pointed out, for example, that the exorcisms involved in traditional Baptism are included because they “go a long way in keeping away demonic spirits.”

He also noted that the liturgical form of a sacrament has an “impact on the validity of that sacrament.”

“They’re the living connection that each individual has to Holy Mother Church. The sacraments are such an ineffably important part of our faith that you want to make sure you ‘get it right,’” said Mariotti.

“We want to make sure we realize that the sacraments that we receive from the hand of the priest have a real impact on our spiritual lives, on the survival of our souls, and I think that’s why this is so much more than just a liturgical issue.”

Regarding the legitimacy of the directive to cut the traditional sacraments, Mariotti said, “It’s definitely as close as one can get to illegitimacy before actually hopping the Tiber and leaving the truth of Rome.”

The petition was begun by Noah Peters, a 36-year-old lawyer and recent convert to Catholicism from Judaism who is a parishioner at St. John the Beloved in McLean, Virginia. He fears that if his diocese’s implementation of Traditionis Custodes resembles in any way that of Chicago, for example, that they will be left with only one or two Latin Masses. “It’s really scary to think that we could be looking at nearly all of them being canceled.”

He explained to LifeSiteNews that Burbidge’s newly announced measures are “devastating” for several reasons, one important one being that the Traditional form of the Mass and sacraments bring vocations to the diocese. He pointed out that the diocese had nine new vocations to the priesthood last year, outnumbering by five even the entire country of Ireland, which had only four new vocations last year.

Peters said the TLM also attracts families with children, and that he has gotten “a lot of feedback” on the importance of the TLM especially for children with autism who are prone to sensory overstimulation. He said they tend to be better behaved during the Latin Mass because it is considerably quieter.

Furthermore, he said the new restrictions “destroy the unity” in the diocese. “We had no disunity in this diocese before Traditionis Custodes. There was no tension at all between Traditional Latin Mass devotees and Novus Ordo attendees.” In fact, he said, “in many if not most cases they were the same people.”

Peters would like Bishop Burbidge to be able to personally hear the stories of the many TLM attendees whose lives have been “deeply” touched, and have even been converted or come back to the Church because of the Latin Mass.

Peters himself was converted because of the TLM: He told Catholic News Agency (CNA) that his first encounter with the Latin Mass in 2019 “blew me away,” and that at the time, “any doubt about converting went away immediately.”

He and his wife were married in the Extraordinary Form in October 2021, not long before instructions to restrict the traditional sacraments were issued in December’s Responsa Ad Dubia. “It was the highlight of our life,” he told LifeSiteNews. He lamented that he cannot give the traditional form of the sacraments likewise to his children, at least in his diocese.

The Catholic faithful in the diocese await a document from Burbidge with further details on restrictions of the Latin Mass and traditional sacraments “in light of the recent Responsa.”

Burbidge said in the Dec. 20 podcast, “After the new year I will forward an implementation document draft to the pastors of our parishes that currently celebrate the Mass in the Extraordinary Form.” He will allow for comments from these pastors to assist with implementation but emphasized that these must be “ in adherence … to the directives provided.”

There is also a question of which weekday Latin Masses will be allowed to continue in the Diocese of Arlington, considering that the Responsa also forbids priests from offering the Latin Mass on the same day they offer a Novus Ordo Mass.

In his talk “Discerning True and False Obedience in the Era of Traditionis Custodes,” Dr. Peter Kwasniewski pointed out that obedience to authority within the Church hierarchy is bound by obedience to God Himself, and by the common good. He argues that retaining the Traditional Latin Mass and Sacraments is a non-negotiable for the common good of the Catholic Church for several reasons.

Kwasniewski previously told LifeSiteNews that any restrictions on the Mass in Arlington were in fact “provoking … people to seek shelter in the SSPX or other extra-diocesan chapels.”

“My advice to Catholic priests in Arlington is: Do not obey this unjust limitation, but continue to use the old sacramental rites clandestinely,” he said.

“My advice to Catholic laity is that they should write respectfully to Bishop Burbidge and express their  disappointment and their abiding wish to continue to frequent the sacraments in their traditional forms.”

The Society of St. Pius X (SSPX) offered outdoor, drive-in Masses to Catholics desperate for the sacraments during the first COVID lockdown of 2020. Out of those lockdown Masses, a community grew, and the Society is now building a permanent chapel in the Shenandoah Valley.

LifeSiteNews reached out to the Diocese of Arlington in a request for comment on the Change.org petition to Bishop Burbidge, but had not received a response at the time of publishing.

Peters plans on personally delivering a copy of the signed petition to Burbidge on Monday.