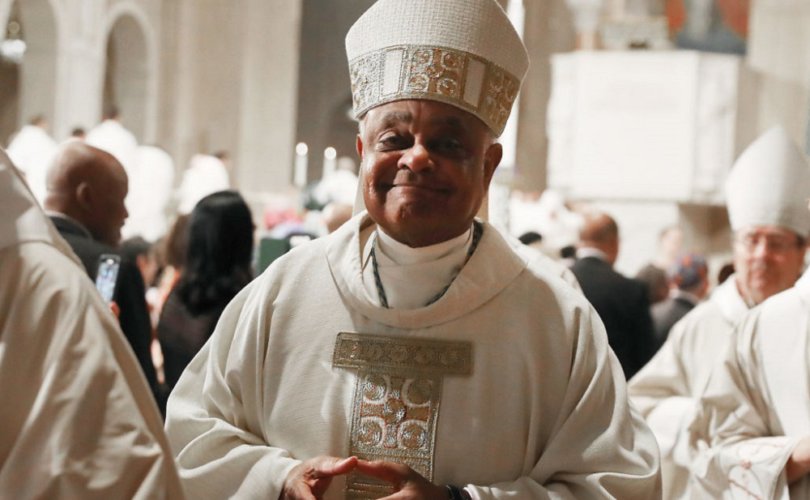 June 16, 2020 (LifeSiteNews) — After less than only two weeks, LifeSite’s petition asking Washington’s Archbishop Wilton Gregory to apologize to President Trump and the Knights of Columbus has already attracted nearly 35,000 signatures.

“Catholics are disappointed in their leadership,” said Scott Schittl, one of LifeSite’s campaign coordinators. “They are calling on Archbishop Gregory to encourage prayer, not with divisive remarks but with welcoming, inclusive statements and gestures.”

He went on to suggest that the Shrine and the Knights of Columbus allowed themselves to be “egregiously misused and manipulated” by the president.

But, to dispel some of the archbishop’s misapprehension of events, the Knights released their own statement about the presidential visit, which was far more gracious in tone:

This [President Trump’s visit] was fitting given St. John Paul II was a tireless advocate of religious liberty throughout his pontificate. International religious freedom receives widespread bipartisan support, including unanimous passage of legislation in defense of persecuted Christians and religious minorities around the world.

Indeed, it was especially fitting, given that President Trump had just signed a new executive order on religious freedom just a few days before his visit to the Shrine.

In the current atmosphere, where tensions are running high, the need for reconciliation and unity on the matter of prayer and the benefit to be gained from visiting holy sites, as well as extolling the virtues of Pope St. John Paul II, who was a strong defender of human rights, should be encouraged.

“Catholics and Christians are clamoring for our spiritual leaders to lead, and not resort to the same type of political point-scoring as our secular politicians,” said Schittl. “Catholics are calling on the archbishop to extend the hand of friendship and seek recourse in prayer, wishing the best for the president and the first lady.”

As no words of reconciliation are yet forthcoming from Archbishop Gregory, this petition remains active. If you haven’t yet signed, please consider signing and sharing with your like-minded family, friends, and colleagues.