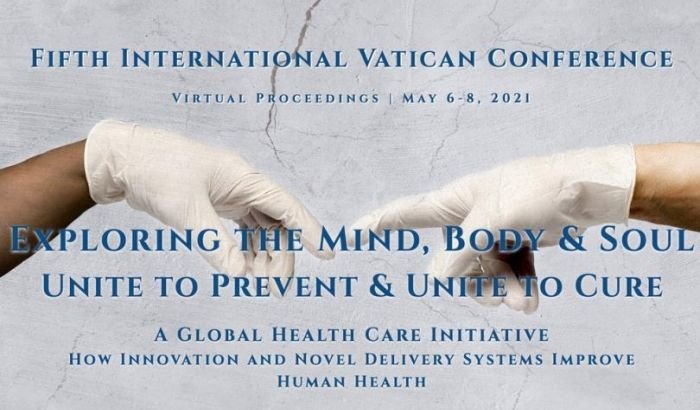 April 23, 2021 (LifeSiteNews) – A new petition from LifeSite asks the Vatican to cancel its upcoming “health” conference featuring a slew of globalist and pro-abortion speakers, including Dr. Anthony Fauci, Chelsea Clinton, and the CEO of abortion pill-producing drug company Pfizer.

The theme of the conference this year is Exploring the Mind, Body & Soul. It will be held “virtually” from May 6 to 8. The cover photo on the conference website features a spoof of Michelangelo’s The Creation of Adam in which the hands of God and Adam are both covered in rubber gloves.

Vatican News describes the event as bringing “together physicians, scientists, ethicists, religious leaders, patient rights advocates, policymakers, philanthropists and commentators to discuss the status quo in medical research and technology, and how these are implemented at a global level.”

A special opening conversation on “shaping the future of healthcare for a healthier world” will be hosted by the experimental vaccine-pushing, double-masking Dr. Anthony Fauci, who has assured the World Health Organization that the Biden regime is committed to funding abortions.

Clinton, vice chair of the corrupt, pro-abortion Clinton Foundation, is on the list of speakers along with former super-model Cindy Crawford, a public supporter of abortion who has attended events to benefit the National Abortion League. Crawford is also famous for posing nude.

Marc Benioff, chair and CEO of tech giant Salesforce, is on the list of speakers. Salesforce has discriminated against and maligned conservatives who questioned the integrity of the elections.

Another speaker is Albert Bourla, chairman and CEO of Pfizer. In addition to making an abortion-tainted experimental coronavirus mRNA vaccine, Pfizer also makes an abortion pill.

Stéphane Bancel, CEO of Moderna, also has a place of honor along with Dr. David Feinberg, head of Google Health.
The speakers are so unapologetically anti-Catholic this year that Archbishop Carlo Maria Viganò said the Holy See is “making itself the servant of the New World Order.”

“The fact that the deep church has managed to elect its own member so as to carry out this infernal plan in agreement with the deep state is no longer a mere suspicion, but a phenomenon which it is now essential to ask questions about and shed light on,” Viganò expressed in a letter published by LifeSiteNews. “The submission of the Cathedra veritatis to the interests of the Masonic elite is manifesting itself in all its evidence, in the deafening silence of the Sacred Pastors and in the bewilderment of the People of God, who have been abandoned to themselves.”

“Further demonstration of this degenerate libido serviendi of the Vatican towards the globalist ideology is the choice of speakers to give testimonials and lectures: supporters of abortion, of the use of fetal material in research, of demographic decline, of the pan-sexual LGBT agenda, and last but not least, of the narrative of Covid and the so-called vaccines,” the archbishop continued.

Commenting on the conference’s main image of The Creation of Man with God’s and Adam’s hands masked, Viganò wrote, “In this sacrilegious representation, the order of Creation is subverted into therapeutic anti-creation, in which man saves himself and becomes the mad author of his own health 'redemption.' Instead of the purifying laver of Baptism, the Covid religion proposes the vaccine, the bearer of disabilities and death, as the only means of salvation. Instead of Faith in the Revelation of God, we find superstition and the irrational assent to precepts that have nothing scientific about them, with rites and liturgies that mimic true Religion in a sacrilegious parody.”

LifeSite’s petition asking the Vatican to cancel the conference notes that the event is so “beyond an outrage, it is a closer to a sacrilege.”

The petition and more information can be found here.