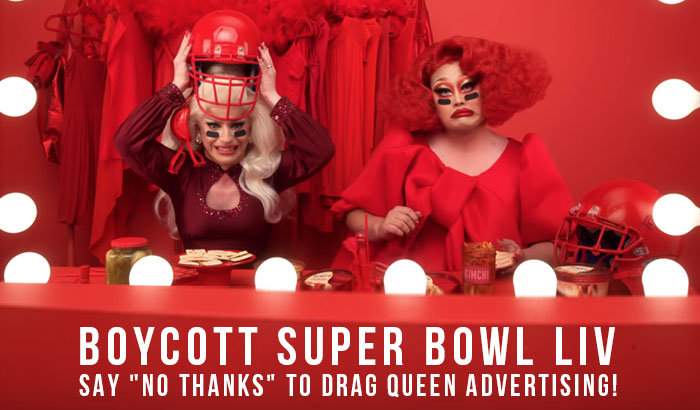 January 29, 2020 (LifeSiteNews) – A petition started by LifeSite is calling on people to boycott the Super Bowl this year, in protest over Fox allowing an ad featuring drag queens during the football showdown.

In a new low for the Super Bowl, drag queens will appear in an ad, or series of ads, for Sabra Hummus, an Israeli company.

“While two men dressed up as women to sell hummus may seem innocuous, the Super Bowl should be a family-friendly environment where sexually-charged ads are ruled ‘out of bounds,’” said Scott Schittl, one of LifeSite’s campaign coordinators.

Since launching the ad yesterday, it has already been signed by 14,000 people.

Schittl said the ad is just the latest efforts by the mainstream media and their fellow LGBT activists, to normalize drag queens.

“To the average person, drag queens may seem harmless because these men imitate women in the most exaggerated of ways, usually passing for comedic caricature. But, drag queens are part of a morally dangerous ideology, which seeks to confuse young minds as to the reality of human nature and the reality that there are only two sexes, male and female,” said Schittl.

“In this way, they help to promote gender ideology and other fantasist beliefs,” he added.

Lately, the Drag Queen Story Hour phenomenon has been meeting with opposition in almost every corner of the country.

“Parents instinctively want to protect their children from adult men who want to read to their children, while dressed up as women. They know that there is something intrinsically sexual about this type of encounter,” said Schittl.

“What many people don’t know is that many drag queens have other ‘jobs’ in the ‘adult entertainment industry,’ and that some are convicted sex offenders, which makes the appearance of drag queens at an event like the Super Bowl incompatible with family and children,” he added.

Many contend that the Super Bowl should be a family-friendly event, especially because so many children play and watch football.

“Fans are really disappointed that Fox – of all channels – would allow this type of ad,” said Schittl. “But, if enough people pledge to boycott this year, that will be a catalyst for change, so, that, next year, it will again be safe for children to watch the Super Bowl.”

The petition encourages Christian parents to boycott the Super Bowl this year, and send a message to Fox and to their advertisers that family is more important than football, and that the Lord's Day should be kept holy.