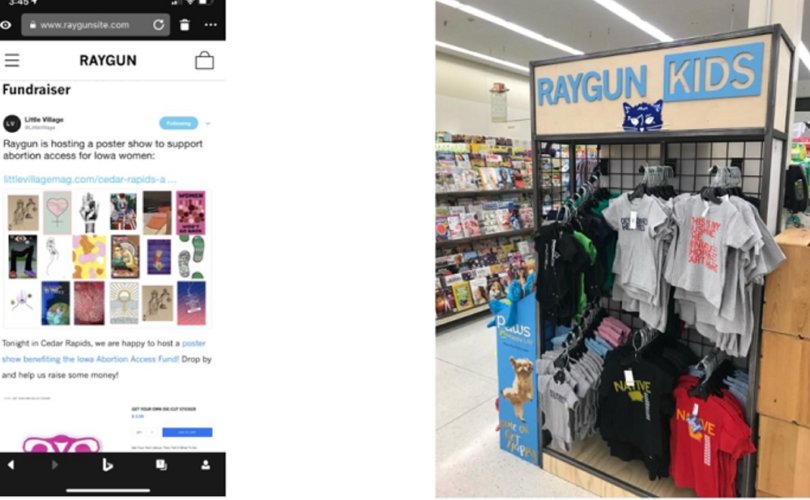 IOWA, August 20, 2020 (LifeSiteNews) – Hy-Vee is a popular, family-friendly chain of supermarkets based in Iowa and located in seven other midwestern states.

Raygun is a clothier, also based in Iowa, and known for its block-letter t-shirts which ridicule conservatives and conservative ideas.

But, as LifeSiteNews and Personhood Iowa’s new joint petition reveals, Raygun is also known for promoting and funding abortion.

“Some think Raygun t-shirts are ‘edgy’ and others think they are just crass pandering to progressives,” said Tim Overlin, Executive Director of Personhood Iowa. “And, whereas Personhood Iowa doesn’t take a stand on their t-shirts, we are appalled by their shameless funding of abortion.”

“Mixing Hy-Vee and Raygun together is a terrible combination,” said Scott Schittl, one of LifeSite’s campaign coordinators. “That’s one of the reasons why we’re partnering with Personhood Iowa on a new petition asking Hy-Vee to remove Raygun’s in-store clothing displays and not to renew future Raygun contracts.”

Earlier this summer, the founder and owner of Raygun, Mike Draper, sent out an email in support of Planned Parenthood. Planned Parenthood is America’s largest abortion chain. It aborts over 300,000 children annually.

As seen on their website, as well as on the picture above, Raygun is proud to contribute funding to the IAAF, an organization which directly pays abortionists to kill innocent pre-born human beings.

By hosting displays of Raygun clothing, Hy-Vee is financially supporting Raygun. This means that Hy-Vee is partnering with an organization that’s in the business of helping to kill their future customers and harm their current ones.

Of course, it is possible (even probable) that Hy-Vee may not even know about Raygun's promotion and funding of abortion.

So, now is the time to make Hy-Vee aware of how offensive Raygun’s funding of abortion is to their customers.

Hy-Vee is an employee-owned corporation, which should mean that each local store has some autonomy as to what products are and are not sold.

For this reason, we are providing the telephone number of the Hy-Vee corporate headquarters which can be used to politely voice your disapproval.

We are also providing the link for their store locator, so that, if you live in the area, you can locate your nearest Hy-Vee to, again, politely express your disapproval to your local store manager, in person, if possible.

Thank you for signing this petition and politely asking Hy-Vee to remove Raygun displays in their stores and to not renew Raygun's contract in the future.