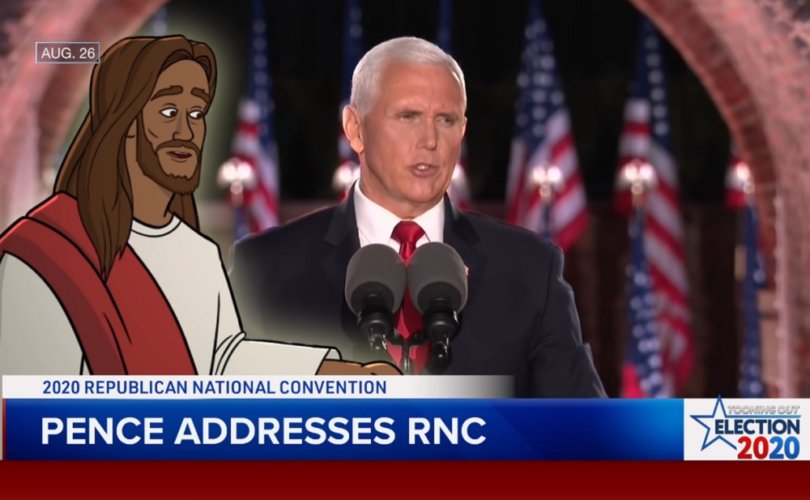 In a June 24 segment, a cartoon Jesus comes down from above and follows Vice President Pence up the stairs to Air Force 2, ordering, “Pence, you gotta stop saying you get your policy ideas from me.”

“You’re making me look like a jerk,” declares Jesus, as the vice president jogs up the steps.

“Hey, get back here! Stop ignoring me!” shouts cartoon Jesus, who is made to look as if he’s tackled the vice president at the top of the stairs.

“Ho, ho, nice save. Very smooth!” quips Colbert’s cartoon Jesus, sarcastically mocking the vice president as he stands up, turns, and waves to the crowd.

In an August 26 segment, just as Vice President Pence declares that “what Joe [Biden] doesn’t understand is that America is a nation of miracles” during his Republican National Convention speech, Colbert’s cartoon Jesus again descends from on high.

“Hey everybody, it’s the miracle guy,” announces Jesus amid sparkles. “Guess what! Party’s over. I’m not bailing you out of this one.”

“Sure, I could turn microphones into fish or whatever,” says cartoon Jesus as Pence’s microphone morphs into a couple of flopping fish. “But this COVID thing is tough,” groans Jesus with sanpaku eyes.

“But I tell you what I will do. I’ll put some masks on these dummies,” says Jesus as masks suddenly appear on people seated in the audience.

“And I’m taking these fish,” says cartoon Jesus as he grabs them from in front of the V.P. and ascends into the sky. “Because I like ’em raw. That’s right. Jesus eats weird stuff. Got it?”

CBS’s YouTube page describes this as Jesus showing up to “set the record straight.”

LifeSiteNews has launched a petition demanding that CBS stop Stephen Colbert’s repeated mockery of Jesus Christ and his offensive display of anti-Christian bigotry.

Mocking what other people hold dear is always in bad taste. But, mocking God, Himself, for the sake of a few laughs, is unacceptable.

Please SIGN and SHARE this petition, which demands that CBS put a stop to Colbert’s irreverent depictions of Christ.