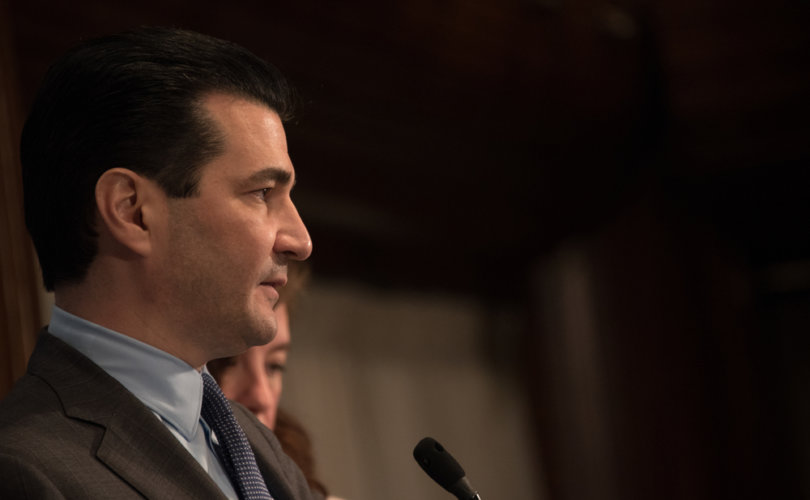 ENGLEWOOD CLIFFS, N.J. (LifeSiteNews) – Pfizer board member and former FDA commissioner Scott Gottlieb suggested that the time has come to lift mask and COVID-19 vaccine mandates in parts of the United States.

“I think as conditions improve, we have to be willing to relax some of these measures with the same speed that we put them in place and lean in a little bit,” Gottlieb said at a January 24 appearance on CNBC’s Squawk Box. “Do it before things fully improve, while the conditions are looking like they are on a clear trajectory, like they are doing in the UK.”

The appearance of Gottlieb on the network at this time suggests that the establishment seeks to save institutional face as it attempts to walk back failed and autocratic COVID-19 policies. Just days before Gottlieb appeared on CNBC, England and Ireland surprised the world with announcements that they are rescinding most of their pandemic mandates. Additionally, the Biden administration suffered a serious defeat at the U.S. Supreme Court, which rejected his move to use OSHA regulations to force experimental COVID-19 injections on employees in medium to large private businesses.

The former FDA commissioner hinted that the relaxation of mask and vaccine mandates is due to the increasing frustration felt by Americans over frequently illogical and mercurial COVID policies. “I think a lot of the acrimony we have here in the United States is because we haven’t prescribed clear goal posts for when we are going to withdraw a lot of these measures,” Gottlieb said. “And the two most contentious things right now in the U.S. are the masks among children in schools and the vaccine mandates.”

Despite reiterating his position that masks do not provide much benefit against COVID-19, Gottlieb seemed to argue both in favor of masks and against them. He asserted they should still be used in schools that do not have other ways to mitigate the virus but admitted in nearly the same breath that masks are “disruptive to children and we know that they have had a cumulative impact on the socialization of kids in schools.”

Gottlieb did not explain which is a worse evil: to damage children socially by masking them for months with practically useless masks or leave children free and unmasked against a virus that they will almost undoubtedly survive.

In spite of the Pfizer CEO Albert Bourla’s recent statements that its abortion-tainted COVID-jabs offer very little if any protection against the virus, Gottlieb claimed that it is time to remove injection mandates in places because the inoculations have been so effective. “You just saw Connecticut announce that they are going to suspend their vaccine mandate for state workers,” he said. “Why? Because they have achieved most of their goals. … The population has a lot of immunity in it. Cases are declining in Connecticut, and so it doesn’t make as much sense to have that mandate in place anymore.”

Gottlieb summarized his guidance by intimating that the logic that should guide governments moving forward is to adopt “a flexible doctrine” regarding COVID mandates in order to maximize the compliance of the population: “I think the only way to get, you know, the compliance from people and get a combination is if we demonstrate that we have the ability to withdraw these things in the same manner in which we put them in,” he said.

The experimental COVID-19 jabs have never shown been shown to stop infection of transmission of the virus in clinical trials. Instead, an increasing amount of data suggests that the injections are harmful and potentially lethal. The Food and Drug Administration recently pleaded for 75 years to release all of the data sent by Pfizer to the agency with regard to the Pfizer vaccine’s development but was denied by a U.S. District Judge, who said Americans have an immediate right to transparency about this information.