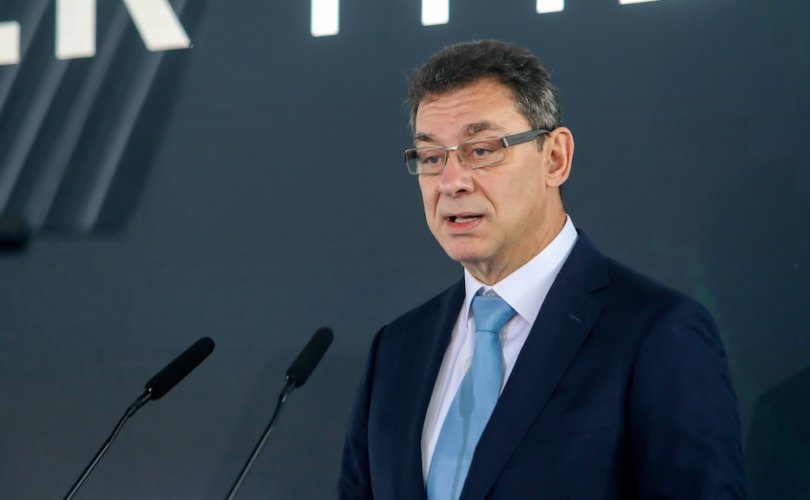 GENEVA (LifeSiteNews) – Pfizer’s CEO Albert Bourla has said he is working on the creation of a new vaccine against COVID-19 that could be taken annually in order for people to become more “compliant” in taking COVID vaccines.

Bourla made the comment at a press briefing organized by the International Federation of Pharmaceutical Manufacturers & Associations (IFPMA), which took place Wednesday and where he discussed the creation of a new COVID vaccine.

An annual vaccine to boost ‘compliance’

“What the world really needs is a vaccine that can last a year,” stated Bourla.

The head of the pharmaceutical giant described this idea as “the optimal public-health solution,” arguing that it would be easier to get the public to comply with a yearly vaccination, as opposed to vaccination every three or four months.

“A vaccine that will be taken once a year is way [easier] to administer and [to] have the population be compliant with it,” he said.

When asked by media briefing host Claire Doole about his prognosis regarding COVID and the alleged need for vaccination, Bourla replied that the virus is “very difficult to eradicate.”

“The most likely scenario is that the virus will continue being with us for the years to come,” he said.

After admitting that the protection provided by the vaccines currently available “is not long lasting,” Bourla lamented the lack of enthusiasm for booster shots, pointing to the diminishing number of recipients for each new dose allegedly required.

“The issue is that right now we are in many, many countries in the fourth dose, and that creates a fatigue,” he said.

“Way more people got the second [dose] than the third … [and] I think the compliance with the fourth dose will not be as high as we have had [previously]” he added.

The CEO of Pfizer cited the boosters’ lack of popularity as the main reason for manufacturing an annual vaccine.

“[We] realized that people will not comply with the fourth or fifth vaccination … this is why we need to come [up with] scientific innovations that will allow us to have a vaccine that is annual.”

The ‘politicization’ of COVID vaccines

Bourla then complained about global vaccine hesitancy and opposition to tyrannical and totalitarian-like COVID restrictions.

He called the refusal to get vaccinated with the experimental, abortion-tainted mRNA injections, which have generated millions of reports of adverse events worldwide, a “politicization” of the vaccines, which he claimed was damaging to public health.

“I think that what didn’t help at all, and this was a very big issue, was the fact that there was a politicization,” he said.

“It became a political statement [to get] a vaccine or [to] wear a mask or not, and that created tremendous damage to global health.”

Bourla was then asked about the creation of a vaccine more suited to the Omicron variant and discussed the possibility of creating a vaccine that would encompass all known variants.

“It’s easy to do something only against Omicron,” he said.

“What scientifically and technically is more challenging, but that we need to do, is to be effective against everything known so far.”

When asked whether this could be done by the fall, Bourla replied that “it is a possibility that we will have it by then,” though “not a certainty.”

The CEO of Pfizer said he is waiting for “more data” to “make a decision” about which vaccine to go for.

“Once we have [more] data about that, it will allow us to make a decision as to which one is the best path forward, because in our studies right now we are testing different vaccines,” he said.

“Once we’ve sorted that out, then we will submit it to the FDA, to European authorities, as well as with every other authority in the world.”