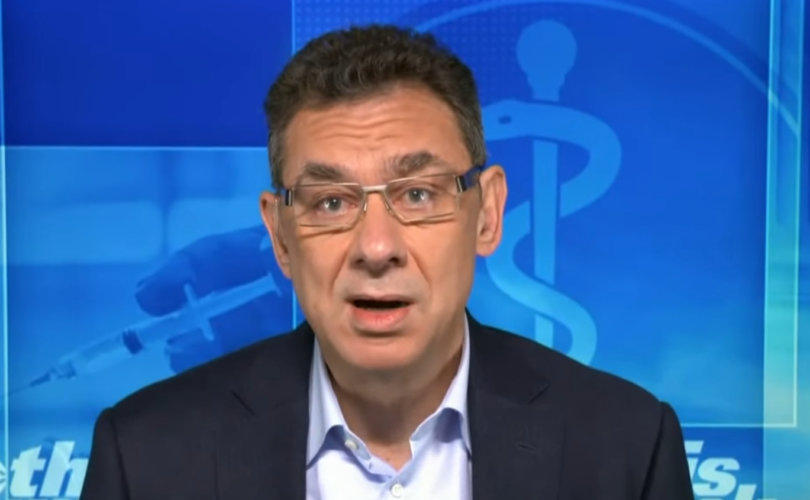 (LifeSiteNews) — The CEO of Pfizer has contradicted his prior claims that his company’s double-dose mRNA COVID-19 injections were “100% effective,” now stating that two doses of the jab don’t offer much protection against symptoms from the latest variant of COVID-19 “if any.”

“We know that the two doses of the vaccine offer very limited protection, if any,” said Pfizer CEO and chairman Albert Bourla in a Monday interview with Yahoo! Finance.

Pfizer CEO Bourla on Pfizer vaccine efficacy against #Omicron: “Two doses of the vaccine offers very limited protection, if any. 3 doses with a booster offer reasonable protection against hospitalization and deaths. Less protection against infection.” pic.twitter.com/wg9yho7Br5

Bourla made his most recent comments regarding the drastically reduced efficacy of COVID-19 injections in the context of the rise of the omicron variant, a more transmissible but less dangerous mutation of COVID-19 which public health experts say has been largely able to evade vaccines.

In another Monday interview at multinational investment banking corporation JPMorgan’s Health Conference, Bourla continued to use the failing efficacy of the COVID injections to argue for more shots.

Bourla further acknowledged, however, that he’s unsure how long even the booster shot will provide protection against serious symptoms of the coronavirus, stating that the “question mark” is “how long that protection lasts with the third dose.”

As vaccine efficacy for the first two doses has plummeted, so too has booster jab effectiveness.

According to data from the U.K. Health Security Agency, a two-dose regimen of either Pfizer or Moderna’s mRNA shots is just 10% effective against omicron symptoms 20 weeks after the second dose. Individuals who received a two injections of AstraZeneca, moreover, could expect no protection against omicron after the same period.

Meanwhile, even a third dose of Moderna or Pfizer’s shots were found to be just 40% to 50% effective against the new fast-spreading variant within as little as 10 weeks after the booster shot was received.

In response to the failing effectiveness of the increasingly mandated jabs, Bourla has announced that his company has already begun working on a vaccine specifically tailored for the omicron variant, which he said will be ready for distribution in March, long after some experts expect omicron infections to have already peaked and declined.

The move to introduce an omicron-specific drug comes after COVID czar Dr. Anthony Fauci said in December that a vaccine developed uniquely for the new variant was unnecessary.

“Our booster vaccine regimens work against omicron,” Fauci said during a press briefing on December 15. “At this point, there is no need for a variant-specific booster.”

While Bourla and others have used the failing efficacy of the two-dose jabs to encourage even more injections, including booster shots and variant-specific injections, opponents of the mass immunization scheme have suggested that the jabs’ acknowledged inability to protect against the omicron variant is yet more reason to suspect the injections have generally failed.

Further, some have argued that the omicron variant’s ability to evade the drugs delegitimizes the notion of mandating vaccination.

Among those making the argument against jab mandates in the wake of omicron are French virologist and 2008 Nobel Prize winner Luc Montagnier and former Yale law professor Jeb Rubenfeld, who argued in a Sunday opinion piece for the Wall Street Journal that the rise of the new vaccine-evading variant makes “vaccine mandates obsolete.”

“It would be irrational, legally indefensible, and contrary to the public interest for government to mandate vaccines absent any evidence that the vaccines are effective in stopping the spread of the pathogen they target,” the authors contend. “Yet that’s exactly what’s happening here.”

Despite opposition, it appears likely that Pfizer and other drug manufacturers will continue rolling out COVID jabs to deal with more and more emerging variants.

Late last year, Dr. Bourla told the BBC that annual COVID jabs would likely become the norm for “years to come,” leading some to question whether the company’s interest in rolling out yearly injections – which are increasingly mandated for participation in daily life –  is less than altruistic.

According to the BBC, Pfizer has generated at least $35 billion in revenue from COVID shot sales and “has seen its share price soar.” Meanwhile, Reuters has reported that the company expects its 2021-2022 combined COVID jab earnings to total at least $65 billion.

“It is a strong incentive for innovation for the next pandemic,” said Bourla in defense of his company’s burgeoning COVID jab profit margin, arguing there’s a “financial reward” to creating “something that saves lives and saves money.”

Despite Bourla’s claims that his injections save lives, however, in the U.S. more people are reported to have died with COVID-19 listed on their death certificate in 2021 – following the roll-out of the shots – than in 2020 before the injections were available.