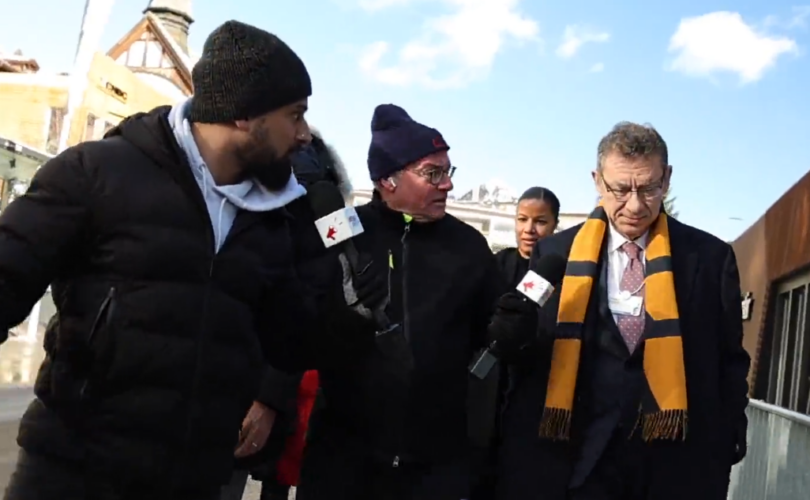 “Thank you very much,” replied Bourla, who seemed to then quicken his pace.

Not giving up, Levant continued to follow the pharmaceutical executive and said, “I mean, we now know that the vaccines didn’t stop transmission [of COVID], but why did you keep it secret?”

Without getting a response, Levant reframed his question, asking, “You said it [the vaccine] was 100 percent effective, then 90 percent, then 80 percent, then 70 percent, but we now know that the vaccines do not stop transmission. Why did you keep that secret?”

“Have a nice day,” replied Bourla, to which Levant responded, “I will not have a nice day until I know the answer!”

“Why did you keep it a secret that your vaccine did not stop transmission?” further pressed the veteran Canadian journalist.

Once again not receiving a reply from Bourla, another Rebel News reporter, Avi Yemini, joined up with Levant to field his own questions.

“Is it time to apologize to the world, sir, to give refunds back to the countries that poured all their money into your vaccine that doesn’t work, your ineffective vaccine?” inquired Yemini, only to once again be met with silence from Bourla.

“Are you not ashamed of what you’ve done in the last couple years?” followed up Yemini, at which point Levant chimed in to ask, “Do you have any apologies to the public, sir?”

Unsatisfied with the lack of answer, Yemini then asked if Bourla was “proud” of the fact that as CEO he has made millions in the last two years “on the backs” of “regular people at home in Australia, England and Canada?”

After both the reporters asked a few more similar questions, still to silence, Levant and Yemini asked Bourla if he was “worried” about “myocarditis” and the “sudden deaths” that have been frequently associated with the various COVID jabs.

“What do you have to say about young men dropping dead of heart attacks every day? Why won’t you answer these basic questions?” inquired a frustrated Levant.

“Do you think you should be charged criminally for some of the criminal behavior you’ve obviously been a part of?” Yemini followed.

After a few more questions from the reporters were met with silence, Bourla and the small group of people he was with arrived at their destination, leaving Yemini and Levant behind.

After the one-sided interview, Yemini and Levant proceeded to talk among themselves about the CEO’s shocking silence and began to criticize the mainstream, so-called “accredited” media for failing to ever ask Bourla and similar figures the type of questions they asked him.

Despite Bourla’s silence, Levant and Yemini struck a chord with many on social media, who celebrated the reporters for asking questions for which they too have been seeking answers.

One such notable reaction came from Cristian Terhes, a member of the European Parliament representing Romania who replied to the coverage, saying he too has been unsuccessful at getting Bourla to answer questions.

Although the COVID vaccines were – and in some cases still are – touted as “safe and effective” by governments and corporate media outlets throughout the world, and even in many cases mandated to work certain jobs or even gain entrance into restaurants, bars and other aspects of society, since their rollout evidence has continued to mount that indicate the novel injections lack many of the attributes initially ascribed to them.

While the concept behind vaccine mandates and vaccine passports was the implication that the shots stop transmission of the virus – a narrative promulgated by U.S. Centers for Disease Control and Prevention (CDC) Director Rochelle Walensky and U.S. President Joe Biden among others – the fact is that coronavirus vaccine trials have never produced evidence that the vaccines stop infection or transmission.

In fact, in October 2022, a Pfizer executive appeared to tell a special committee of the European Parliament that the pharmaceutical giant did not even know whether their shot stopped transmission because the company never bothered to test if that was the case.

On the question of whether the shots are “safe,” numerous data sets and studies continue to emerge highlighting the potentially horrific consequences of taking the jabs.

An April 2022 study out of Israel indicates that COVID infection alone cannot account for such myocarditis cases, despite claims to the contrary.

While jab defenders are quick to stress that reports submitted to VAERS are unconfirmed, as anyone can submit one, the CDC itself recognizes a “high verification rate of reports of myocarditis to VAERS after mRNA-based COVID-19 vaccination,” leading to the conclusion that “under-reporting is more likely” than over-reporting.

Beyond just the COVID vaccines, Pfizer as a company is also a source of distrust for many, as the pharmaceutical giant has a history of shady business practices.