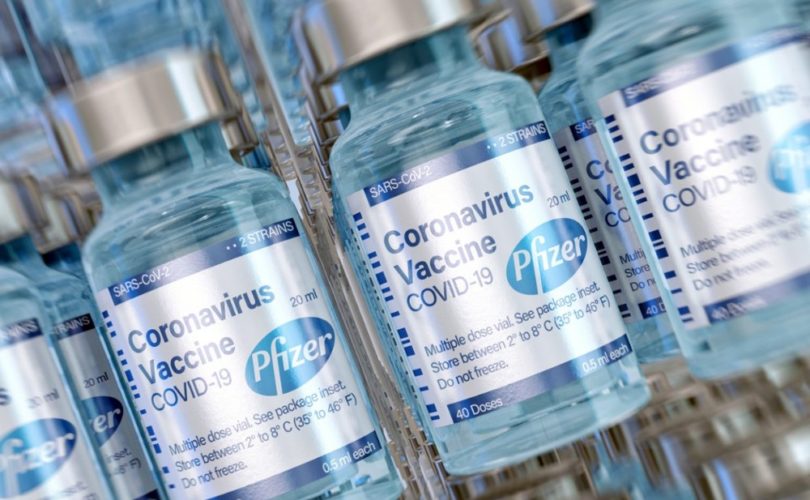 Scientists with the Institute of Hematology at Shamir Medical Center said they began researching the possible link after reports of a sudden increase in TTP across Israel — four cases detected in one month compared to two or three cases per year.

TTP is an autoimmune disorder that causes blood clots to form in small blood vessels throughout the body. According to the National Institutes of Health, these clots can cause serious health problems if they block vessels and restrict blood flow to organs, such as the brain, kidneys and heart.

According to the Jerusalem Post, the medical team said they found a “chronological connection” between vaccination and the onset of TTP symptoms. They stressed this occurred in both new patients and in patients with pre-existing TTP whose disease had been in remission but flared up soon after getting the vaccine.

The Health Ministry, which is evaluating the research, asked doctors not to provide interviews until the evaluation is complete.

Dr. Maya Koren-Michowitz, head of the Hematology and the Translational Hemato-Oncology Laboratory and lead author of the study, recommended people with a history of TTP get vaccinated only with special permission from their doctor — and if they do vaccinate, get a follow-up clinical evaluation.

Koren-Michowitz also called on “healthy people” who are vaccinated to be vigilant and seek medical help immediately if symptoms appear.

“Physicians and patients need to be alert to the clinical symptoms: weakness fatigue, neurological disorders, hemorrhage and chest pain,” the Israeli team said in a press release.

A spokesperson said the study is very small and “should not deter individuals from getting the COVID vaccine.”

Experts have long warned mRNA vaccines may cause blood clots

As The Defender reported in April, U.S. regulatory officials were alerted as far back as December 2020 that the Pfizer and Moderna vaccines — like AstraZeneca and J&J COVID vaccine — could pose similar risks of blood clots.

On Dec. 8, 2020, before any COVID vaccines received Emergency Use Authorization in the U.S., J. Patrick Whelan, M.D., Ph.D., wrote the U.S Food and Drug Administration (FDA) about the potential for vaccines designed to create immunity to the SARS-CoV-2 spike protein “to cause microvascular injury and blood clots throughout the body including the brain, heart, liver and kidneys, in ways that were not assessed in the safety trials.”

As The Defender reported in February, Whelan, a Harvard-trained physician with a background in biochemistry, medicine and rheumatology, did not dispute the vaccines’ potential to quickly arrest the spread of the virus — assuming the vaccines prove to actually prevent transmission, which also was not assessed in the clinical trials.

But Whelan cautioned “it would be vastly worse if hundreds of millions of people were to suffer long-lasting or even permanent damage to their brain or heart microvasculature as a result of failing to appreciate in the short-term an unintended effect of full-length spike protein-based vaccines on other organs.”

In a study published by Oxford University, researchers found the number of people who developed cerebral venous sinus thrombosis (CVST) blood clots after COVID vaccines was about the same for Pfizer, Moderna and AstraZeneca.

“These findings are consistent with what we know about how vaccine-induced spike proteins can on their own cause cell signaling through interactions with the ACE-2 receptors,” said Lyn Redwood, RN, MSN, president emerita of Children’s Health Defense.

“When this happens, it can result in inflammation and a host of other potentially pathological events in the epithelial lining of the blood vessels which can then trigger pro-inflammatory cytokines capable of activating coagulation systems and down-regulating anticoagulant pathways resulting in clot formation.”

A study published February in the Journal of Hematology examined thrombocytopenia following Pfizer and Moderna vaccination in response to the death of a 56-year-old Florida physician — the first identified patient who died from a brain hemorrhage after receiving Pfizer’s vaccine.

After examining 20 case reports of patients who suffered blood clots following vaccination — including 17 without pre-existing thrombocytopenia — and analyzing data from U.S. health agencies, VAERS and treatment providers, researchers behind the Journal of Hematology study could not exclude the possibility that the Pfizer and Moderna vaccines had the potential to trigger ITP. They recommended additional surveillance.

In April, the Association of American Physicians and Surgeons (AAPS) informed the FDA that mRNA products, through spike proteins, may have “the potential to cause microvascular injury [inflammation and small blood clots called microthrombi] to the brain, heart, liver and kidneys in ways that were not assessed in the safety trials.” The FDA did not respond.

The AAPS identified at least 37 people at the time who developed a rare platelet disorder after receiving the Pfizer or Moderna shot.

On April 13, Dr. Hooman Noorchashm, a physician-scientist and advocate for ethics who specializes in cardiothoracic surgery, joined Tucker Carlson on his show to discuss blood clots and vaccines.

Noorchashm, commenting on the FDA decision to temporarily pause J&J’s vaccine after reports of blood clots, said although it was a good sign the FDA was taking seriously blood clot complications with the J&J vaccine, the agency was missing similar thrombotic complications with Pfizer and Moderna.

“I don’t know why this cluster is sort of affecting J&J. There are certainly other examples of thrombotic events with Pfizer and Moderna that have been entered into the VAERS system.”

According to Redwood, it’s “only logical to assume” that when the vaccine creates the identical spike protein that occurs in infection, and which has been identified as the culprit causing a myriad serious and life threatening injuries, “we are going to see these same injuries in individuals who receive the vaccines.”