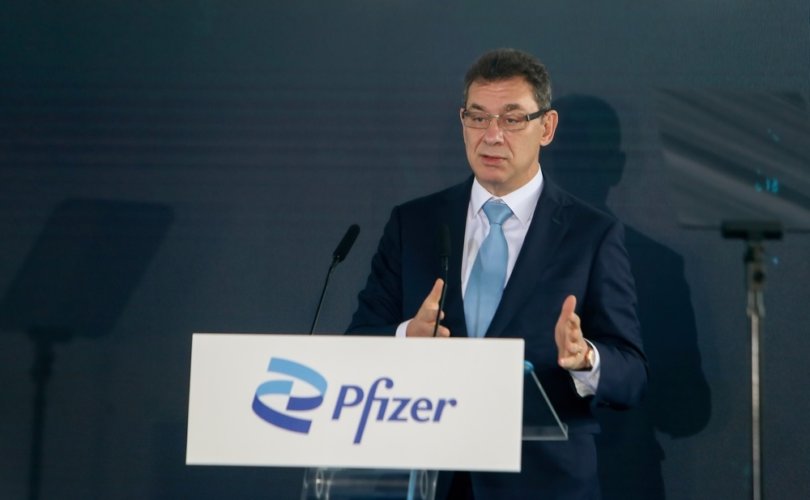 Dr. Aaron Kheriarty highlighted the information in an April 4 tweet which included a screenshot of the relevant section of the document.

Kheriarty is a member of the Public Health and Medical Professionals for Transparency (PHMPT) organization, the group of over 30 physicians and researchers that filed the FOIA lawsuit against the U.S. Food and Drug Administration (FDA) last year to demand the release of the documents it reviewed prior to greenlighting the Pfizer-BioNTech COVID shots.

“Finally got the unredacted version of this FoIA’d document,” Kheriarty wrote. “Three months after the release of the [COVID-19] vaccine Pfizer had to hire 600 additional full-time employees, with a plan to hire 1800 total, just to process the flood of adverse events reported.”

Finally got the unredacted version of this FoIA’d document. Three months after the release of the vaccine Pfizer had to hire 600 additional full-time employees, with a plan to hire 1800 total, just to process the flood of adverse events reported. pic.twitter.com/5emJ0s9djl

According to the newly released document, which was made public nearly a year after it was created on April 30, 2021, Pfizer’s marketing authorization holder (MAH) had to prioritize the processing of “serious cases” alone after receiving “large numbers of spontaneous adverse event reports” in connection with the COVID-19 drugs.

The document states the company gave special attention to the serious cases “in order to meet expedited regulatory reporting timelines and ensure these reports are available for signal detection and evaluation activity.”

In an effort “to help alleviate the large increase of adverse event reports,” the massive pharmaceutical company, which has a market cap of over $300 billion, took “multiple actions,” including “increasing the number of data entry and case processing colleagues,” as well as making “significant technology enhancements.”

“To date, Pfizer has onboarded approximately 600 additional fulltime [sic] employees (FTEs),” the unredacted document stated. “More are joining each month with an expected total of more than 1,800 additional resources by the end of June 2021.”

Brian Hooker, chief scientific officer of Children’s Health Defense, told The Defender in a statement that the sheer number of adverse events recorded in mere months following the rollout of the drugs was “unprecedented.”

“It is no wonder that an army of 1,800 individuals was needed to process all of the information,” Hooker said.

The revelations regarding Pfizer’s hiring push to deal with the surge in adverse events come after the FDA in March released roughly 150 documents it reviewed prior to granting approval of Pfizer’s COVID drugs.

In January, U.S. District Judge Mark Pittman of the Northern District of Texas rejected the FDA’s request to stall publication of the crucial safety data for up to 75 years, after the PHMPT filed its FOIA lawsuit.

The FDA had asked the court to significantly delay the release of the Pfizer documents, citing “unduly burdensome” logistical and personnel hurdles.

The PHMPT has since uploaded the extensive trove of documents onto its website.

The data made accessible to the public includes a lengthy priority review request document containing over 100 pages of anonymous safety-related data tables. Another document outlines a $2.9 million user fee payment from Pfizer to the FDA, which Endpoint News called “standard.”

However, the 150 documents merely scratches the surface of the hundreds of thousands of pages currently in the possession of the FDA.

American Greatness reported that in the Texas court order, which has thus far resulted in the release of roughly 10,000 pages of previously unreleased documents, the judge also “directed the FDA to release approximately 12,000 documents immediately, and then 55,000 pages a month until all documents are released — totaling more than 300,000 pages.”

One of the documents included in last month’s data dump was a document entitled “Cumulative analysis of post-authorization adverse event reports,” which detailed adverse events connected with the Pfizer jab which had been identified through Feb. 28, 2021.

While the cumulative analysis had been released back in November, American Greatness pointed out that some of the information contained in the document had been redacted, “including the number of employees Pfizer said it hired and was planning to hire.”

LifeSiteNews reported in early December that the 38-page document detailed over 150,000 serious adverse events recorded in the first three months after the FDA granted emergency use authorization (EUA) for the injections.

The Surgi-Center, a Washington, D.C. abortion clinic infamous for offering late, second trimester abortions, and its owner, abortionist Cesare Santangelo, are at the center of a scandal involving possible violations of federal laws against partial-birth abortion and infanticide.

In an exclusive video interview with LifeSiteNews, Lauren Handy, the director of activism at Progressive Anti-Abortion Uprising (PAAU), told LifeSiteNew's Editor-in-Chief, John-Henry Westen that, with the help of a whistleblower, her organization rescued and properly buried the remains of about one hundred aborted babies from Santangelo's Surgi-Center.

But, five of the deceased babies were so large and so developed that they suspected the Surgi-Center of engaging in the illegal practices of partial-birth abortion or infanticide (i.e., killing the child after birth) à la Kermit Gosnell.

Please SIGN and SHARE this urgent petition to the Department of Justice, asking them to launch an investigation into alleged violations of federal law by Santangelo and the D.C. Surgi-Center, under either the Partial Birth Abortion Act (2003) or the Born-Alive Infants Protection Act (2002). *Anyone - no matter where you reside - can sign this petition!

Unfortunately, the story doesn't end there.

Handy and eight of her fellow pro-life rescuers in PAAU are, themselves, now facing jail-time after being arrested by the FBI for conducting a traditional pro-life sit-in in October, 2020, at the very same abortion center from which the late-term deceased babies (mentioned above) were rescued.

Please note that the two events - the pro-life rescue in 2020 and the gruesome discovery of the five near-to-full-term babies in the Surgi-Center's "bio-medical waste" earlier this year - are almost one-and-a-half years apart.

Thus, Handy believes that their recent arrest is no coincidence...and, moreover, that the FBI is being used to create a smokescreen by arresting her and the other pro-lifers.

At the same time, the D.C. Medical Examiner's office does not seem interested in discovering the truth about the deaths of the five aborted babies and possible illegal partial-birth abortions or infanticide happening at the D.C. Surgi-Center.

But, commenting on the arrest, Lauren Handy stated: "Media reports have stated that we ‘invaded’ the abortion center and ‘disrupted’ women from exercising their ‘reproductive rights’. No, that is not what we did."

"We entered the clinic and sought to love the women who were already there for their abortion procedures," Handy said. "We tried to offer them help so they would choose life. We non-violently defended the unborn who were about to be exterminated – the innocent, the most vulnerable, killed in horrific acts of violence and treated as so much trash."

Tireless pro-life activist Dr. Monica Miller, the director of Citizens for a Pro-Life Society and leader of Red Rose Rescue, told LifeSiteNews that "this is the first time any of them are facing federal charges. That the rescuers were hunted down by FBI agents is unprecedented in the history of pro-life activism."

All of this...possibly...for discovering five near-or-at-term aborted babies at Cesare Santangelo's D.C. Surgi-Center, and for seeking to give justice and dignity to the murdered babies.

The truth now needs to come out!

Thank you for SIGNING and SHARING this urgent petition!

To contribute to the legal defense of Lauren Handy and the other eight members of PAAU, please CLICK on the following link to find out more about their LifeFunder campaign (also operated by LifeSiteNews): https://www.lifefunder.com/victims

'EXCLUSIVE VIDEO: Pro-life hero raided by FBI speaks about the aborted babies she was trying to honor' - https://rumble.com/vzsslx-exclusive-pro-life-hero-raided-by-fbi-speaks-about-the-aborted-babies-she-w.html

According to the data, the vast majority of the serious adverse events occurred in women (29,914) compared with men (9,182). The largest proportion of adverse events based on age occurred in people ages 31-50 (13,886), an age range generally at low risk of serious effects from the virus.

Full or ongoing recovery was reported in 19,582 cases, with 520 having recovered with sequelae (a chronic condition), while at the time of the report some 11,361 cases had not recovered. The status of another 9,400 was unknown.

1,223 cases were reported to have ended fatally.

Table 6 of the document stated that of 270 “unique pregnancies” that were exposed to the vaccine, “no outcome was provided for 238 pregnancies.”

LifeSite’s Celeste McGovern noted that according to Pfizer’s own numbers, “of 32 pregnancies with known outcome, 28 resulted in fetal death.”

“Based on Phase 1 data from the FIH Study BNT162-01, BNT162b1 and BNT162b2 [various vaccines tested during the trial period] were safe and well-tolerated in healthy adults 18 to 55 years of age, with no unanticipated safety findings,” the document states.

“Phase 2/3 safety data were generally concordant with safety data in Phase 1 of the study, both overall and with regard to younger and older participants.”

The FDA’s reluctance to release the documents has raised the ire of medical freedom advocates and others. Earlier this year, the editors of the prestigious BMJ issued an urgent call for the full release of all data regarding the COVID-19 injections and other treatments, arguing that keeping crucial information hidden from the public is “morally indefensible.”

Since the roll out of the COVID-19 drugs last year, rates of vaccine-related adverse events reported to the government’s Vaccine Adverse Event Reporting System (VAERS) have skyrocketed.

As of March 25, there have been over 1.2 million adverse events reported to VAERS in connection with COVID jabs made by Pfizer, Moderna, and Johnson & Johnson, including 26,396 deaths, 145,781 hospitalizations, and 37,579 cases of myocarditis (heart inflammation).