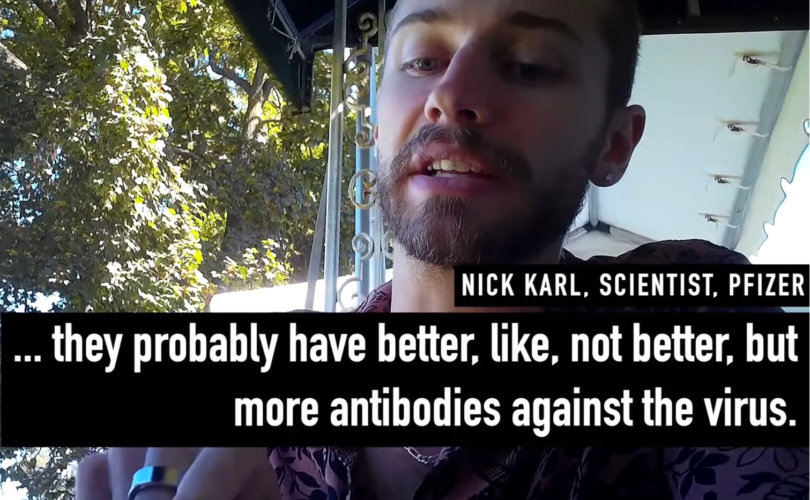 (LifeSiteNews) — Three Pfizer scientists admitted that natural immunity is stronger than vaccine immunity and that the company is trying to keep that information from the public in order to maximize profits, according to a video released Monday by Project Veritas.

The undercover report features footage of three Pfizer scientists, Nick Karl, Chris Croce and Rahul Khandke, making stunning revelations about the COVID vaccine as well as the culture of the pharma giant. As in the previous instalment of the Project Veritas series, the footage was captured in restaurant settings and contains the unfiltered statements of the three scientists. Some foul language in the videos has been censored.

The first scientist featured in the video, Nick Karl, revealed that “when somebody is naturally immune (they got COVID), they probably have more antibodies against the virus.”

Karl contrasted this type of immunity provided by the Pfizer vaccine to natural immunity, which he argues is stronger.

“When you actually get the virus, you’re going to start producing antibodies against multiple pieces of the virus,” he explained, “not only that outside portion [but also] the inside portion, the actual virus. So, your antibodies are probably better at that point than the vaccination.”

Chris Croce, a senior associate scientist at Pfizer featured next in the video echoed Karl’s words. When the undercover journalist asked him whether she was as well protected against COVID after having recovered from it as someone who had received the Pfizer shot, Croce replied, “Probably more.”

When prompted to elaborate, Croce explained, “You’re protected most likely for longer since there was a natural response.”

Croce also said the current spike in delta variants is likely caused by the rapid waning of antibodies among vaccinated people rather than by the variant itself: “They [the vaccinated] are still protected but don’t have that 95% percent efficacy. It’s more like 70%.”

Croce then condemned the idea of a vaccine passport and argued that it constitutes a violation of privacy. “They’re trying to get their numbers,” he said, “but still you shouldn’t have to show anything which is basically in my opinion a violation of HIPAA [Health Insurance Portability and Accountability Act].”

“No one has a right to ask you if you’ve been vaccinated,” added Croce, “it’s an invasion of privacy. I don’t agree with it.”

Nick Karl, on the other hand, despite his own admission that natural immunity is stronger than the immunity provided by the vaccines, did not appear to oppose the vaccine mandates currently enforced in many places, instead commenting on the efficacy of the policy to boost vaccination numbers.

He explained that the policy of making life impossible for vaccinated people is likely to lead to the vaccination of the entire population.

The next part of the video revealed the reigning culture of profit-making at Pfizer. Croce argued that profit rather than public health is what drives vaccine production within big pharma companies. “I mean you have multiple companies that were basically given a **** tone of money to produce vaccines and they’re pushing them,” he stated.

Croce admitted that he resents the culture at Pfizer. “I still feel like I work for an evil corporation because it comes down to profits,” he said, before arguing that this profit mentality clashes with his own moral principles. “I’m there to help people not to make millions and millions of dollars.”

When asked why treatments, such as monoclonal antibodies treatments are being pushed to the side, Croce replied, “Money, it’s disgusting.”

The senior associate scientist at Pfizer summed up the whole idea when he revealed that Pfizer is currently running on “COVID money” and that the company cashed over $15 billion thanks to the jabs.

Concerns over myocarditis amongst young people

Croce was then asked about myocarditis and admitted that the frequently reported adverse effect has become a concern for Pfizer. He also revealed that the risk is higher for younger people. When asked why that is the case, he replied, “That’s what we’re looking into right now. We just sent 3000 patients’ samples to get tested for elevated troponin levels to see if [the condition] is vaccine based.”

Croce opined that if the test results establish a connection between the Pfizer vaccine and the thousands of reported cases of myocarditis among young people, it “might pull something from the market.”

Big brother is watching you

The explosive undercover report also revealed a culture of secrecy at Pfizer, with employees being warned not to disclose what they know about the vaccine and potentially being monitored to make sure they comply with this rule.

At some point during his conversation with the Project Veritas undercover journalist, Croce asked half-jokingly, “You’re not wearing a wire, right?” He then explained that “there are ears and eyes everywhere in the [Pfizer] building.”

The Pfizer employee revealed that “you don’t talk about anything that can possibly implicate you or Big Pharma,” adding “even if you shut the door to the office [you wonder] who’s listening.”

The third scientist featured in the report, Rahul Khandke, described how Pfizer trains employee to stick to a specific script when talking to the public about the vaccine. “We’re bred and taught [to say that] the vaccine is safer than getting COVID,” he said.

Khandke also explained that the pharma giant forbids its scientists from disclosing certain information on the vaccine to the public. “We have to do so many seminars on this. We have to sit there for hours and hours and listen to [them say] ‘you cannot talk about this in public.’”