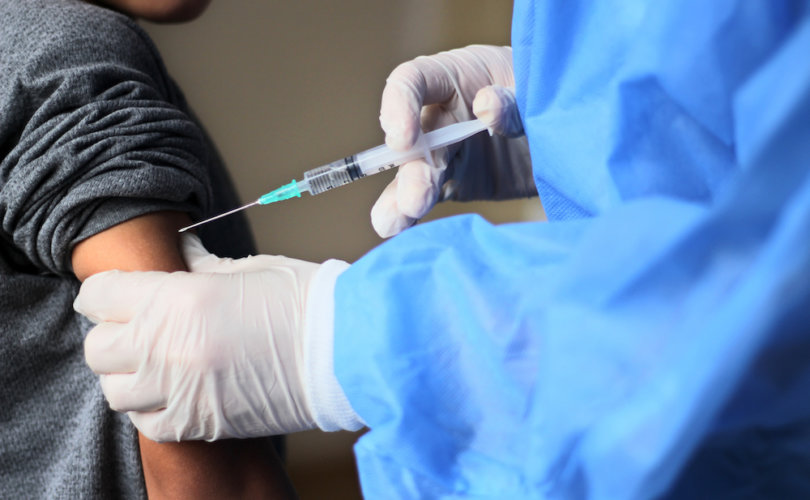 Correction: An earlier version of this article was headlined “Pfizer to force everyone age 12 and over in Brazilian city to get COVID shot” and said that “Pfizer has confirmed it will hold a mandatory trial of its COVID-19 shot among all the inhabitants aged 12 and older of a Brazilian city.”  LifeSiteNews is unaware of any evidence proving that citizens unwilling to receive the Pfizer jabs will be forced to take them. On October 12, 2021, Dr. Aaron Kheriaty, a professor of psychiatry at the University of California-Irvine’s (UCI) School of Medicine, said that “Brazilian citizens will be *forced to participate*” in a Pfizer trial in Brazil after the New York Times announced that “Pfizer will fully vaccinate everyone in a Brazilian city over the age of 12 to study the safety and efficacy of their vaccine.” LifeSiteNews is contacting Pfizer and the local Brazilian authorities to ask whether the trial will be mandatory for all residents of the city over the age of 12.

(LifeSiteNews) – A University of California professor has said that Brazilian citizens will be “forced to participate,” in a Pfizer COVID-19 jab trial after after the New York Times announced that “Pfizer will fully vaccinate everyone in a Brazilian city over the age of 12 to study the safety and efficacy of their vaccine.”

“They are doing a one-year clinical trial for safety and efficacy. Brazilian citizens will be *forced to participate*, which violates every principle of the ethics of human subjects research (Nuremberg Code, Helsinki Declaration, Belmont Report, etc.),” Dr. Aaron Kheriaty, Director of Medical Ethics at UC Irvine Health wrote in response to the announcement by the New York Times.

They are doing a one-year clinical trial for safety and efficacy. Brazilian citizens will be *forced to participate*, which violates every principle of the ethics of human subjects research (Nuremberg Code, Helsinki Declaration, Belmont Report, etc.). https://t.co/WycQaZH1jd

The city of Toledo in the state of Paraná near the Paraguayan border will host the trial, with residents to be injected with two doses of the COVID shot and then studied for one year as part of its attempt to ascertain the long-term consequences of the abortion-tainted vaccine.

“The initiative is the first and only of its kind to be undertaken in collaboration with the pharmaceutical company in a developing country,” Pfizer said Wednesday, October 6.

56 percent of Toledo’s 144,601 population are reported to be fully vaccinated according to health officials, as Pfizer now partners with a local hospital and the Federal University of Paraná to boost uptake in what the company is calling an “observational study.”

Paraná state governor Carlos Mass Ratinho Júnior had met with Pfizer officials on August 24 to finalize plans for trial, telling reporters it was a “great joy” for the city of Toledo to advance the vaccination rate among young people 12 years of age and older.

The New York Times reports that 98 percent of the city’s eligible inhabitants have now received their first dose of the Pfizer vaccine, after the company shipped 35,173 doses to Toledo in late August.

— Article continues below Petition —
PETITION: No to mandatory vaccination for the coronavirus
Show Petition Text
1072825 have signed the petition.
Let's get to 1100000!
Thank you for signing this petition!
Add your signature:
Show Petition Text

Pfizer’s former vice president and chief scientist Dr. Michael Yeadon has previously slammed the British government’s now-implemented plan to give COVID shots to 12–15-year-olds without parental consent, writing that children are not at any “measurable risk from SARS-CoV-2” and that “no previously healthy child has died in U.K. after infection.”

“The USA reporting system VAERS is showing around 13,000 deaths in days to a few weeks after administration,” Yeadon wrote. “A high % occur in the first 3 days. Around 70% of serious adverse events are thromboembolic in nature (blood clotting- or bleeding-related).”

“We know why this is: all of the gene-based vaccines cause our bodies to manufacture the virus spike protein & that spike protein triggers blood coagulation,” the former Pfizer VP said. “The next most common type of adverse events are neurological. Death rates per million vaccinations are running everywhere at around 60X more than any previous vaccine.”

“Worse, thromboembolic events such as pulmonary embolisms, appear at over 400X the typical low rate after vaccination,” Dr. Yeadon said. “These events are serious, occur at a hideously elevated level & are at least as common in young people as in elderly people. The tendency is that younger people are having MORE SEVERE adverse events than older people.”

“There is literally no benefit whatsoever from this intervention,” Dr. Yeadon concluded.

Brazil’s health minister Marcelo Queiroga had criticized several states for pushing the shots among minors, advising adolescents in mid-September who had taken one dose to avoid taking another as a result of at least one 16-year-old girl’s death near São Paolo and some 1,545 adverse events being reported in the country.

In the U.S., Pfizer officially requested an emergency use authorization (EUA) on Thursday last week to administer its experimental COVID vaccine to young children between the ages of 5 and 11.

The shots currently have an EUA for young people aged 12 to 15, while children under the age of 12 are considered “ineligible” to get the jab for now.

LifeSiteNews yesterday reported on the death of a healthy 16-year-old boy in California who passed away suddenly during a Zoom math class just over three weeks after receiving his second shot of Pfizer’s COVID-19 injection, a Vaccine Adverse Event Reporting System (VAERS) entry shows.

The young boy’s death follows similarly tragic news from other bereaved parents, including Ernest Ramirez, a Texan father who lost his only son, 16-year-old Ernesto, to the Pfizer jab on April 24.

The World Health Organization’s database reports over 2 million possible adverse reactions from the COVID-19 shots, with the highest proportion of them in young people aged 18-44.