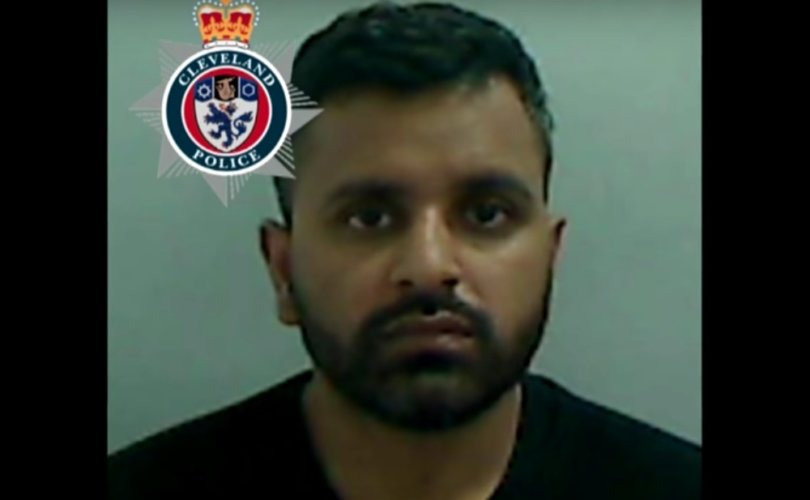 MIDDLESBROUGH, United Kingdom, December 6, 2018 (LifeSiteNews) – A homosexual pharmacist in England has been sentenced to 30 years in prison for murdering his wife so he could take her frozen embryos and start a new “family” in Sydney, Australia with his male lover.

Thirty-seven-year-old Mitesh Patel has been convicted of strangling his wife Jessica Patel to death with a plastic bag, The Guardian reports, the culmination of a plan five years in the making. He reportedly wanted out of his marriage as part of a longstanding desire to escape his Hindu upbringing; the murder would have left him with £2 million from his wife’s life insurance to start that new life.

According to the prosecution, Jessica had known for years that Mitesh was cheating on her with a man he had met on the homosexual dating app Grindr. What she didn’t know is that he spent years researching how to kill her, via internet searches for queries such as “insulin overdose,” “plot to kill my wife, do I need a co-conspirator,” “hiring hitman UK,” and “how much methadone will kill you?”

Eventually, he subdued her with an insulin injection at their home, strangled her to death, and then ransacked the home to stage an apparent robbery on which he could blame her death. He then called the authorities to report the “attack,” pretending to tell his already-dead wife “come on baby, wake up” (part of the call can be heard in the following video). During the trial, he later claimed he didn’t attempt to resuscitate her because he had lost his “bearings.”

Patel’s story unraveled when police discovered insulin syringes, one of which was empty, in his laptop bag and his aforementioned internet searches. They also took the innovative step of examining the health apps on his and his wife’s iPhones, which tracked their every step throughout the day.

Through the app, they discovered that Mitesh had moved all over the house after killing her to stage the fake burglary, while Jessica’s phone had been still along with her dead body until her husband moved it outside to simulate it having been dropped by a burglar.

All in all, the trial took three weeks and the jury took just under three hours to deliver a guilty verdict.

“You are a selfish man, business-driven, wanting a very successful life and wishing to retire at 40,” Justice James Goss admonished the defendant. “You were also wanting to commit to a life with another man on your own terms and you well knew that insurance policies would realise £2m on Jessica’s death.”

Texts from Patel to his lover Dr. Amit Patel such as “you know this plan, do you think we will succeed?” and “I’m telling you, her days are marked,” suggest the latter was aware of the former’s murderous intentions. But so far, police are saying only that they have “spoken to Amit,” and that further details would “unduly prejudice any further proceedings, should they ever be taken against him.”

Mitesh Patel said he married Jessica because she loved him and the union would be a convenient cover for his homosexuality, according to the BBC. She had obtained three embryos from three rounds of in-vitro fertilization, but was killed before they could be implanted. Mitesh and Amit planned to raise at least one of the children together themselves.

“She knew exactly who her killer was and he mercilessly ignored her attempts to fight for her own life as he ended it,” Jessica’s younger sister Divya said in a statement. “We can only imagine the fear and panic she must have felt, knowing herself this was it. Thinking of that moment makes our hearts so heavy.”

“Only Mitesh himself can truly answer why he did this,” she continued. “Everything he has done has been purely for selfish reasons. He could have divorced her, taken everything he wanted, he did not need to take her life. He had no right to take this evil, cruel and malicious step.”